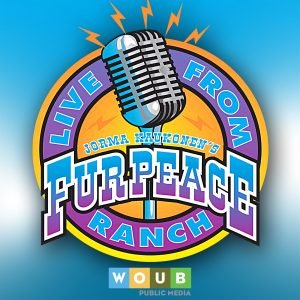 Vanessa Kaukonen, CEO of FPR and Jorma’s wife, said that even with the innumerable hours she has dedicated to facilitating Live From Jorma Kaukonen’s Fur Peace Ranch, the anniversary comes as a bit of a surprise.

“I really can’t believe it’s been 20 years!” Vanessa said, attributing the show’s creation to WOUB Director of Radio, Rusty Smith. “When Rusty initially told us he wanted to do a radio show, I thought he wanted Jorma to come on the radio and bring in some vinyl, because we had talked to Rusty a lot about obscure guitar players and stuff like that. But what he really had in mind was a live radio show broadcast from here.”

The first incarnations of that live radio show didn’t look much like the show fans have grown accustomed to. Initially, the concerts were held in a large classroom with the recording gear set up in one of the small cabins provided for guitar camp students. With her hopes set on the expansion and popularization of the FPR concerts, Vanessa began planning to build what would become the Ranch’s 200-seat concert hall.

“It was difficult filling the house during those early years,” said Vanessa. “We are in the middle of nowhere. We don’t serve alcohol. We’re a destination. With the guitar workshops, I could get students out here, I had the marketing for that down – but it was a real chore to get people to drive 20 minutes down that dark 33 bypass to come and see our shows.”

Vanessa recalled booking internationally recognized fingerstyle guitarist Tommy Emmanuel for one of those early installments of Live From Jorma Kaukonen’s Fur Peace Ranch and having to hand out tickets at the Athens’ Farmer’s Market just to fill the concert hall seats.

“At the time, no one around here knew who Tommy Emmanuel was, but, three years later, you couldn’t even get tickets to see him here,” she said.

Vanessa said a lot of things have changed over the course of the past 20 years at FPR, but even amidst those changes, nothing and no one could have predicted what 2020 and the COVID-19 pandemic would force FPR to face.

“Had I known what was coming back when the pandemic started, I don’t think I would have handled it so well — I know me, I would have been a really big baby. I would have made it all about me because, honestly, it felt personal,” she said. “There are aspects of this that feel very personal for musicians and for venue owners, because as you know, when budgets get cut, arts get cut first, always.”

The COVID-19 pandemic and the accompanying necessary safety protocols forced FPR to cancel all of their concerts in 2020. However, within weeks of announcing the first round of cancellations, Kaukonen and her family began taking part in a radically different live music endeavor: the weekly, online streams of Jorma’s Quarantine Concerts – which, in July 2020, were named one of the top live music streams on the Internet by New York Times’ popular music critic Jon Pareles.

Vanessa said that the streams usually have about 2,500 initial viewers, but within 24 hours of the stream, that number jumps to around 7,500.

“We did the first stream just days after we had to lay off some of our employees, and it was just so instantly quiet here,” said Vanessa. “I’d never lived through a pandemic before. The emotional aspect of a shutdown was really something that we struggled with for months. But one day we went into the concert hall, and we were just looking at the stage – and between (Ohio University lecturer and Fur Peace Ranch videographer) Andi Walla and I, we knew we could do a live music stream.”

“Had I known what was coming back when the pandemic started, I don’t think I would have handled it so well — I know me, I would have been a really big baby. I would have made it all about me because, honestly, it felt personal. There are aspects of this that feel very personal for musicians and for venue owners, because as you know, when budgets get cut, arts get cut first, always.” – Vanessa Kaukonen

Vanessa said that because FPR’s revenue stream had been almost completely cut off due to the pandemic, she had imagined that they would charge for the concerts, but Jorma would not have it.

“This is Jorma’s tagline: ‘if it ain’t free, it ain’t me,’” said Vanessa. “He said: ‘listen, everybody’s in the same boat. Everybody’s stopped. They can’t go see music. We are sheltering in place. Let’s offer the music for free. We’re here anyways.’”

While the streams have remained free, FPR did begin collecting donations through Venmo and PayPal after fans inquired how they could tip during the virtual performances. Thanks to these donations, Vanessa said that she is able to pay the formerly volunteer crew who records the streams.

Even though 2020 was a brutal year, Vanessa said the Quarantine Concerts turned out to be “one of the most magical experiences for us.”

“It really lifted our spirits. It has given us kind of a platform to just say anything – to let it all out there as real as we are. I mean, Jorma and I have argued on air. We’ve really let people in behind the proscenium curtain,” she said. “It’s something we really look forward to, and something we get to do with some 2,500 people every Saturday night.”

FPR is currently gearing up for their first (and already sold out!) live musical performance with an audience since 2019, featuring Hot Tuna, which will take outdoors with social distancing protocol in place May 29.

“I’m going to do all of my summer shows outdoors until the first week in August or so — and keep my fingers crossed that everybody gets vaccinated so we can move back into our concert hall in the fall,” Vanessa said. “That’s the plan, anyway. If there’s anything the past year has taught us, it’s that you can make plans, but you can’t plan the outcome.”

How Sweden and Denmark represent opposite Scandinavian COVID-19 responses