ATHENS, Ohio (WOUB) — More than half of Ohio’s eligible population is fully vaccinated against COVID-19, and yet infection numbers are right back where they were a year ago.

For starters, the Delta variant driving the recent surge is much more contagious than the initial strain that launched the global pandemic.

But only 3 percent of patients hospitalized so far this year with COVID-19 were fully vaccinated, according to data collected by the state.

And just over 1 percent of those who have died from COVID-19 so far this year were fully vaccinated.

“The vaccines are doing their job in terms of reducing hospitalizations and death, but we still have so many people who are unvaccinated that that’s spurring on infection,” said Dr. Gillian Ice, a professor of medicine at Ohio University who is coordinating the university’s response to the pandemic.

The surge in infections has once again filled hospital beds and intensive care units with COVID patients, leaving little room for others. And because the Delta variant is much more potent, patients are taking longer to recover. 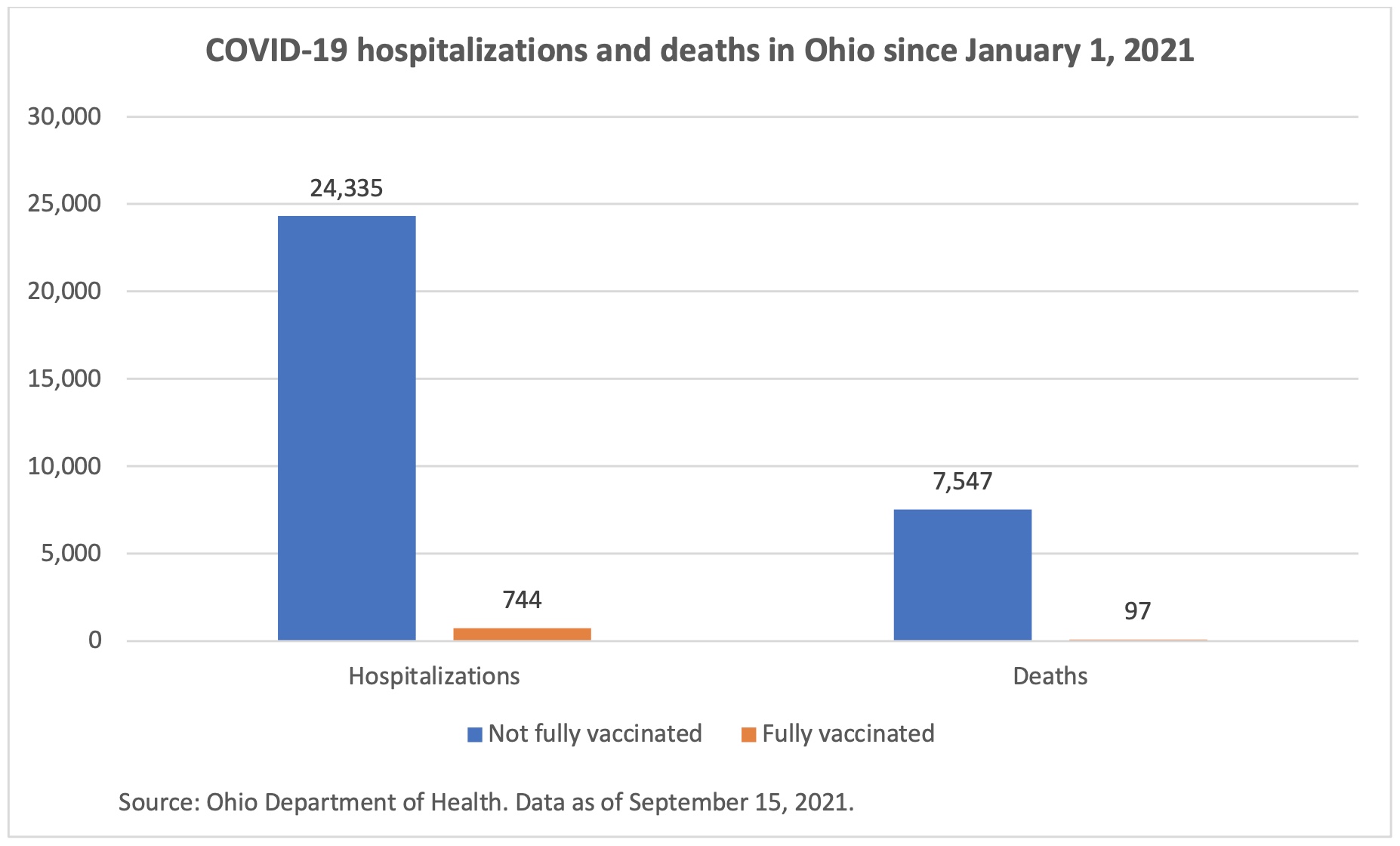 The Ohio Hospital Association, which collects data from its member hospitals throughout the state, reports that one in five patients have COVID-19. It’s one in four patients in the intensive care units.

This is a dramatic shift from just two months ago, when only one in 51 patients were hospitalized with the virus and the number in intensive care was one in 33. COVID hospitalizations are higher now than they were during the winter surge before the vaccines became widely available.

“Even though about half of us today are well protected by vaccination, our daily hospitalizations are about triple what they were last year and the reason is simple: The Delta variant is aggressively seeking out anyone who lacks immunity and is making many of them very sick,” Dr. Bruce Vanderhoff, director of the Ohio Department of Health, said last week at a news conference. “We’re seeing what is essentially a pandemic of the unvaccinated.”

Some hospitals are edging close to capacity, and last week leaders of hospitals and health systems throughout southeast Ohio issued a joint statement pleading with people to get vaccinated and wear masks.

One of those who signed the statement was Dr. Michael Canady, president and CEO of Holzer Health Systems.

“I’m afraid that if someone comes in with a medical problem or surgical problem that we would normally be able to take care of we won’t have the ability to do that,” he said last week at a news conference.

Canady said a patient came in last week with a urological problem that probably would have killed him within 24 hours. A doctor was able to take care of him in the operating room. But there was no bed available for him for his post-operative care and he had to be transferred to another hospital.

Nurses are overworked and burning out, Canady said. Some have quit. Others are leaving to join staffing agencies that pay a lot more for work as traveling nurses. Staffing is stretched so thin that people with nursing degrees who work in administrative positions are filling in on the front-line shifts.

“We are quite frankly at a breaking point and I don’t know how much more we can handle,” Canady said. “I’ve been in health care over 40 years and I’ve never felt so helpless.” 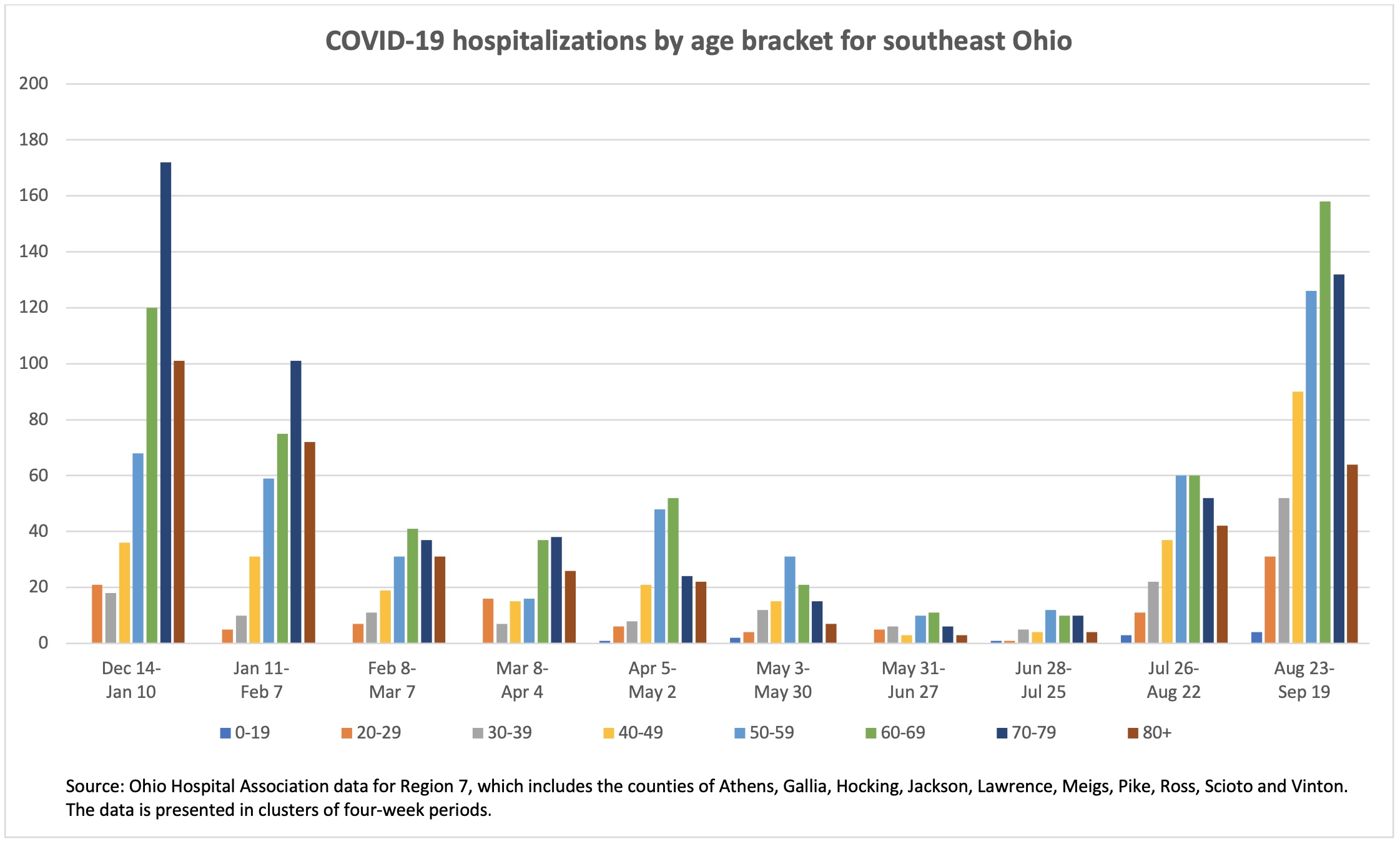 The Delta variant hit just as life in Ohio and elsewhere was starting to get back to normal as vaccines became widely available and case numbers declined in the spring and then plummeted in the summer.

“We let our guard down,” said Dr. James Gaskell, health commissioner for the Athens City-County Health Department. “We were locked down and masking was universal and people were being very careful and events weren’t occurring … and then society opened up and Americans had sort of, if you will, had it.”

All of the COVID-19 precautions protected everyone, but especially the unvaccinated. As the case numbers declined and restrictions were eased, many people who had been working at home for months started going back to the office. More people were going out to shop and eat. Festivals, fairs, concerts and other events that were scrapped last year were back on the calendar.

There’s been a whole lot more social mixing going on, and this left the unvaccinated particularly vulnerable when the new variant swept in, Ice said.

One group that has been particularly hard hit is children and young adults in the zero to 19 age bracket. Earlier in the pandemic, infections and hospitalizations were concentrated among people middle-aged and older. That’s no longer the case.

Not only are young people out social mixing along with their families, but when they returned to school a few weeks ago, they were back in the classrooms, in many cases at schools with no masking requirements.

Within the first few days, schools in Athens County and elsewhere were reporting infections among students, teachers and staff. 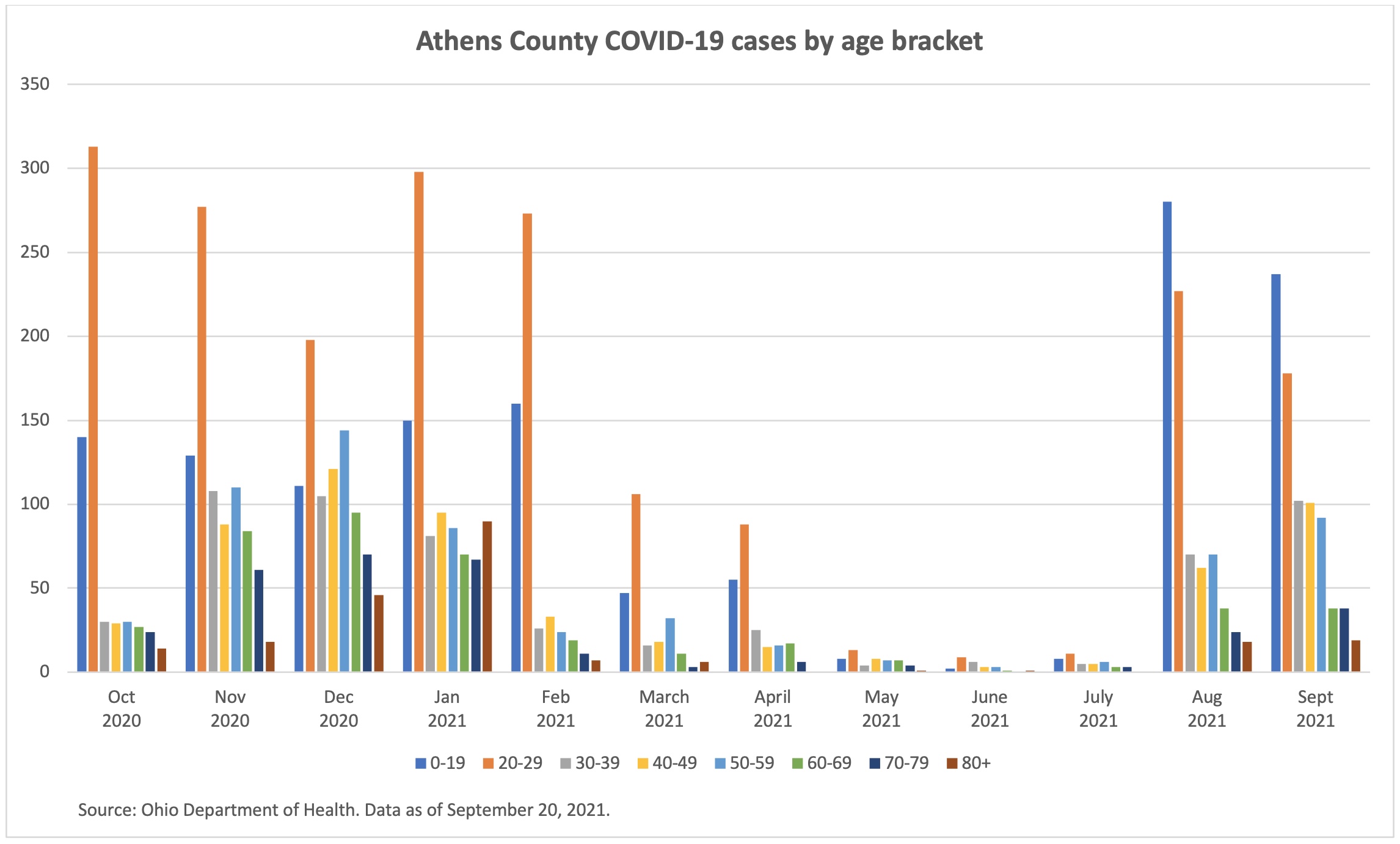 The American Academy of Pediatrics reported last week that COVID-19 cases among children have increased 240 percent nationally since early July when the Delta variant began to surge. During the same period in Ohio, there was a 2,000 percent increase in cases among Ohio children. Cases are increasing at nearly twice the rate among school-aged children as compared to the rest of the population.

In Athens County, there were more COVID-19 cases in the zero to 19 age bracket in August and so far in September than any other age group. Meanwhile, cases among those 60 and over, who have the highest vaccination rates, are much lower relative to the other age groups.

Leaders of children’s hospitals in Ohio said at a news conference last week they are seeing a sharp increase in patients, not only for COVID-19 but also for respiratory illnesses, which are also surging among children.

“Our inpatient numbers are the highest they’ve been,” said Dr. Patty Manning, chief of staff at Cincinnati Children’s Hospital Medical Center. “Our ICUs are caring for more patients than there’s ever been. More children are on ventilators than there has ever been. There are more children than ever entering our emergency departments and our urgent care centers. That impacts the care of all children, not just those that are COVID-19 positive.”

The Ohio Children’s Hospitals Association made a direct appeal to school superintendents to require masks for staff and students.

The Athens City School District started the school year with a mask mandate and other districts in the county followed as their COVID-19 cases shot up at the start of the school year. This should bring the numbers down, Ice said. But precautions outside of school also will be needed to protect children, she said, especially those who are not old enough to get vaccinated.

“Even now, people’s mindset is back like thinking we’re still in June, when there wasn’t a lot of virus,” she said. “They haven’t caught up to the fact that we’re not in June anymore, that things are bad. And so people have to shift their behavior.”

Medical experts continue to emphasize that the quickest path out of the pandemic is through vaccination.

“We could have prevented where we are right now if we’d had (vaccination) in 80 percent of our population three or four months ago,” Canady said.

“When I ask people why they haven’t gotten the vaccine yet I hear, ‘Well I’m just not sure about it yet.’ And I’m like, what are you not sure about? We’ve given 350 million plus doses in the United States, 4 billion doses of vaccine worldwide. It’s the most studied vaccine in the history of mankind. It’s safe, it’s effective, it can save your life.”

Is The Worst Over? Modelers Predict A Steady Decline In COVID Cases Through March