< < Back to
WOUB Digital · Pump House Center for the Arts Spotlights Art of David Pepper: ‘Dreams From Ohio’

Many people know David Pepper as a politician or perhaps as the author of the Jack Sharpe political thriller series. However, much to Pepper’s surprise, an increasing number of people are coming to recognize the former Chairman of the Ohio Democratic Party as an artist and in particular, as a painter.

Wednesday, October 7 through the end of October, the Pump House Center for the Arts in Chillicothe will spotlight Pepper’s work in an exhibition entitled Dreams from Ohio. 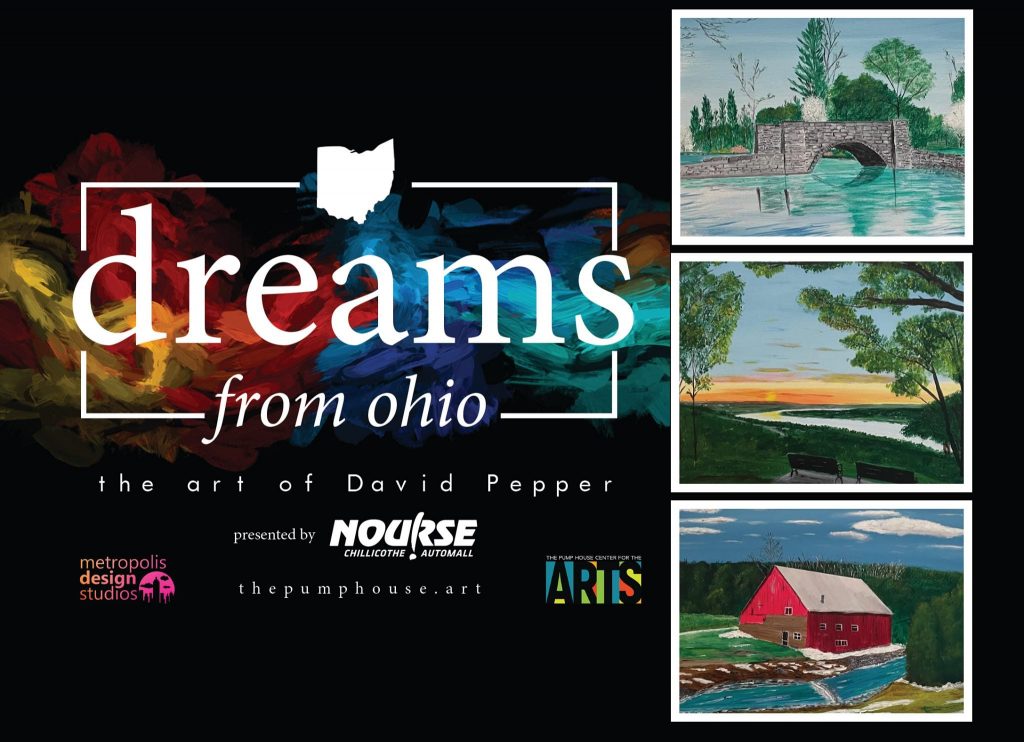 Pepper’s discovery of his newfound artistic passion was entirely serendipitous. In 2019, Pepper was recovering from a back injury. This entailed lots of rest and staying away from strenuous activities for Pepper, which proved to be difficult for the customarily active lawyer, husband, father, and author.

“One day I was in an art store where I would usually go to buy things for my two kids. I was walking around, feeling kind of bored because of the limited number of things I could do because of my back. So I approached the salespeople at the store and asked them, ‘hey, if I wanted to paint something, what do I need to buy?'” recalled Pepper. The salesperson proceeded to walk Pepper to the canvases, the paints, the pain brushes, and even to the instructional books about painting.

“I bought a few things and I walked out, and I just started painting. It was really happenstance. And I think that’s how life works, but I’m obviously really glad I walked into that store that day and thought to ask them about how I could start painting,” he said.

Pepper said he’s learned a lot since that spring day almost three years ago when he left the art store, walking out to his car with bags full of basic painting supplies.

“I mentioned how I started painting because I had a bad back, and that sounds really random. And it was. I started writing in the same way. I’d never written a novel before, but out of the blue, about 10 years ago, I just started writing a book. I still don’t even know exactly why,” said Pepper. “And so my lesson in life to others is to try your best not to get so caught up in your day to day that you don’t have time to try new things. Because you never know, as I didn’t know, what you might actually be good at — or what really might excite your passions about something. Twelve, 13 years ago, if you had told me that I would paint one painting or write one book, I would have said ‘that’s not me. I’m a city council member! I’m a county commissioner!’ I would have never believed that I would paint or write like I do now. And my only regret now is that I wish I would have started doing both 25 years ago!”

The Pump House Center for the Arts

The ‘insurmountable’ weight of expectations on Simone Biles, other professional athletes