Ohio Valley Summer Theater (OVST) Executive Director Christopher Parsons considers OVST to be not only a firmly established theater organization, but a community service organization, as well. An upcoming example of this are OVST’s Friday, November 12 and Saturday, November 13 performances of “All Together Now” entirely for the benefit of the Athens County Food Pantry.

“All Together Now” is a sort of musical theater medley featuring song selections from productions such as “Hairspray,” “Matilda,” “Charlie and the Chocolate Factory,” and more, and the upcoming performances (made possible by a special arrangement with Music Theater International) will take place at Arts West in Athens (132 West State Street). 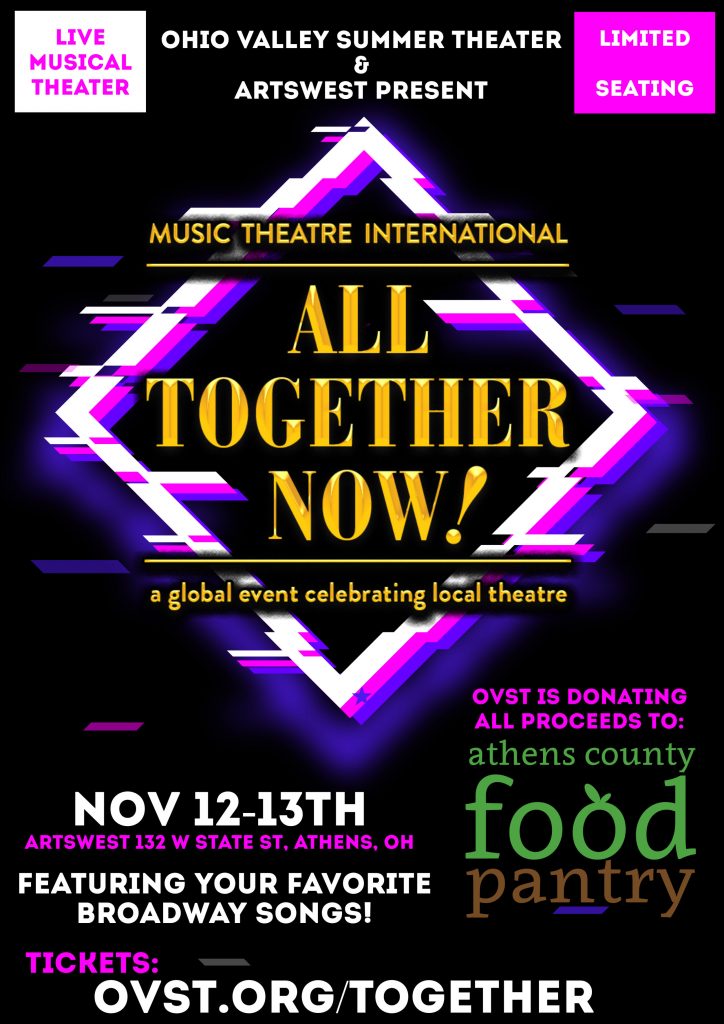 “‘All Together Now’ is a pretty simple, straightforward production that is just a collection of musical theater songs from popular musicals — including some songs that the rights aren’t even available for yet —  that kind of encapsulate the COVID experience both as it was, and as it is now, and as we’re moving forward,” said Parsons. “Some of the songs are reflective of where we’ve been. Some of them are reflective of the current moment, and some of them are kind of looking forward, (but the message is) ‘Hey, we’ve been through this terrible thing, we’ve lost so many people, but we’re going to figure out how we we’re all together and we’re going to move forward.'”

“A lot of theaters are using this to raise money for themselves because they’ve been out of business for a year and a half. That’s certainly the case for us, but we’ve been very lucky and we’ve navigated through COVID with a lot of help. So I thought, well, instead of raising a little bit of money for us, why don’t we raise some money and give it to back to those in need in the community,” said Parsons. “Let’s just say, theoretically, we raised a thousand dollars after all was said and done — well, you know, that’s certainly nothing to sneeze at. That’s fantastic. But would that thousand dollars mean more to us or would that mean more to people who would like to eat?”

According to the Foundation for Appalachian Ohio, Athens County has the highest rate of food insecurity of any county in Ohio, with 20.4 percent of citizens defined as food insecure as compared to the national average of 14 percent and the state average of 16 percent.

“I come from a varied background, but one of the parts of my background is not only being born and raised in rural Appalachia, but also being educated myself in the public school system. So I’ve seen and experienced myself food insecurity firsthand in public schools. And what happened in my opinion, is that COVID made more people realize how many public school students weren’t going to get to eat because they weren’t in school,” said Parsons. “While there have definitely been larger donors that we can think of for the Athens County Food Pantry, but anything will help. And if we can put this money from the community back into the community, that just feels like the best use of it.”

The Ohio Valley Summer Theater and Arts West will present All Together Now Friday, November 12 & Saturday, November 13, 2021 from 7 p.m. to 9 p.m. Buy tickets and find more information on the production at ovst.org.

Family Day At The Kennedy Museum Of Art

Trafficking In a Currency of Hope: MC Freeman

When Colleges Shut Down, Some Students Have Nowhere To Go