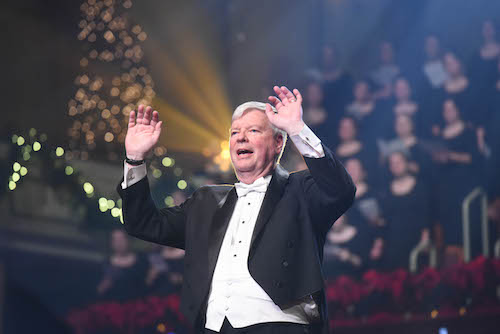 Among the groups to be featured in this year’s edition of CHRISTMAS AT BELMONT are the University Symphony Orchestra, Belmont Chorale, Percussion Ensemble, Musical Theatre, Jazz Ensemble and Bluegrass Ensemble, as well as mass choir. The performance includes both classic holiday music such as “Joy to the World” and “Hark, the Herald Angels Sing,” as well as festive seasonal songs like “It’s the Most Wonderful Time of the Year” and “White Christmas.”

“CHRISTMAS AT BELMONT is one of our favorite projects here at NPT,” said Kevin Crane, president and CEO of Nashville Public Television. “Working with the talented students of Belmont’s School of Music, as well as the dedicated faculty and stellar guest hosts, is a highlight of the holiday season. This year, with the spotlight on Music City after Ken Burns’ Country Music, we are especially pleased to bring this Nashville tradition to our fellow PBS stations.”

Belmont University President Dr. Bob Fisher said Belmont is delighted to have Winans and Smith, both former Belmont trustees, serve as guest performers for this year’s CHRISTMAS AT BELMONT. “These artists have been longtime supporters of the University and our students,” he said. “We’re incredibly grateful for our partnership with Nashville Public Television that brings the tremendous talent of our world-class School of Music to a national audience.”

The best-selling and most-awarded female gospel artist of all time, CeCe Winans has influenced a generation of gospel and secular vocalists over the course of her astonishing career. She has been inducted into the Gospel Music Hall of Fame, the Hollywood Walk of Fame, and the Nashville Music City Walk of Fame. In addition, she has been named a Trailblazer of Soul by BMI and has garnered multiple NAACP Image Awards, Soul Train Awards, Essence Awards and more. Winans has sold more than 5 million albums in the U.S., topping the gospel charts repeatedly while crossing over with hits like “Count On Me,” her duet with Whitney Houston from the multiplatinum ‘Waiting To Exhale’ soundtrack.

During Michael W. Smith’s storied career, he has been honored with three Grammy Awards, 45 Dove Awards, an American Music Award and has sold more than 15 million albums. Smith has also given back to the global community by raising funds to battle AIDS in Africa alongside longtime friend Bono; starting Rocketown, a safe haven for young people in Nashville; and helping more than 70,000 children’s lives through Compassion International.

Belmont University Dean of the College of Music and Performing Arts Dr. Stephen Eaves said, “With our excellent guest artists and talented School of Music faculty and students, we hope to inspire audiences to pause and embrace the joy and true meaning of this Christmas season. It is our privilege to partner with Nashville Public Television and PBS to share this musical celebration with families across the country.”

The performance and taping of CHRISTMAS AT BELMONT returns for the sixth and final time to the Schermerhorn Symphony Center, one of the few venues in the world featuring natural lighting and state-of-the-art acoustics, including motorized acoustic drapes and an acoustical isolation joint that encircles the entire concert hall and prevents sound waves traveling into or out of the hall. Starting in 2021, CHRISTMAS AT BELMONT will be taped in Belmont’s new world-class Performing Arts Center.