McAllen, Texas, located at the southern tip of the state within the Rio Grande Valley, is the largest city in Hidalgo County. A true bi-national city, it is home to Whole Woman’s Health of McAllen – the last abortion clinic on the U.S./Mexico border. Since there is only one abortion clinic in the entire Rio Grande Valley, if this clinic were to close its patients – both US citizens and undocumented people – would have to travel over 250 miles to access a full range of reproductive services. 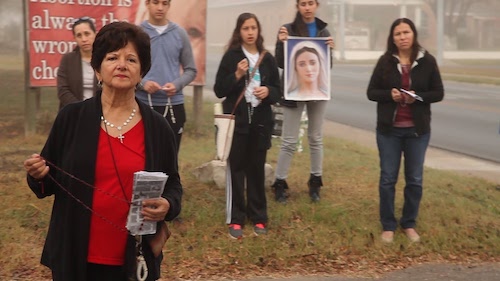 In On The Divide, first-time filmmakers, Maya Cueva and Leah Galant, (recognized as 2021 DOC NYC “40 Under 40 Filmmakers”), follow the stories of three Latinx people living in McAllen, Texas who, despite their views, are connected by the most unexpected of places: the last abortion clinic on the U.S./Mexico border. As threats to the clinic and their personal safety mount, these three are forced to make decisions they never could have imagined.

Throughout On the Divide, filmmakers Cueva and Galant expertly bring the audience into the rising tensions—and humanity—at the center of this contentious issue. Participants featured are Mercedes, a Latina woman in her thirties who used to be involved in gangs and is now part of the pro-life Church movement, embracing the support from the Christian pregnancy center located next door to the clinic. Denisse, a young mother of four, who volunteers at Whole Woman’s Health of McAllen and helps guide women into the clinic, providing much-needed comfort and assistance. Protecting the entryway into the clinic is Rey, a Latino security guard in his late sixties who is fervent in his religious beliefs, but is also deeply affected by the plight of the women who arrive at the abortion clinic. Also in the documentary are organizers Melissa and Denni, co-founders of South Texans for Reproductive Justice, and Yolanda Chapa, founder of the McAllen Pregnancy Center. 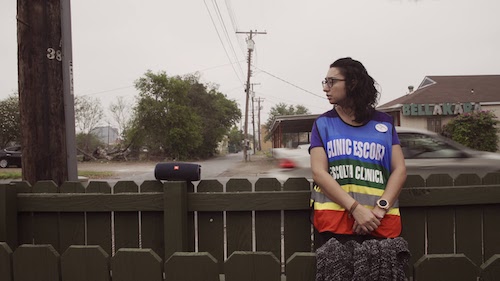 The protagonists’ lives intertwine at the clinic, as they grapple with how their devotion informs their role in fighting for, or against, reproductive rights. Filmed over seven years, the documentary chronicles this community during the political climate of the Trump administration, the storytelling bolstered by an empathetic lens and an authentic concern for spotlighting reproductive rights as a fraught national issue.

“As we began production on On the Divide in 2014, we noticed that many community members were frustrated because they felt the news media often misrepresented, ignored or created ‘poverty porn’ out of their stories,” said co-director, Maya Cueva. “For this reason, we wanted to make sure protagonists’ stories led the film as opposed to talking heads or politicians. We hope that the film shows that there is space within the abortion debate to be both a person of faith and pro-abortion, and it’s valid to decide to have an abortion or to not as long as you are not interfering with other people’s decisions and support that the choice should legally exist. Ultimately, it comes down to bodily autonomy and how choice is necessary for survival.”

“It was important for Maya and myself to create a film that reached outside of echo chambers and the dichotomy that often plagues discussions around abortion,” said co-director, Leah Galant. “We follow people who challenge preconceptions of what it means to have a stake in reproductive justice. We center those most impacted by anti-abortion legislation which are often low income communities of color. We want to leave audiences with this question: what does choice really mean when you aren’t afforded many options?” 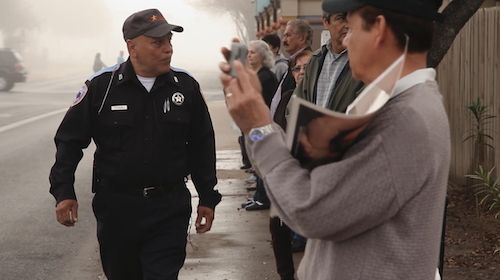 “This impactful film by Maya Cueva and Leah Galant is more important than ever and a strong finish to our 34th season,” said Am Doc | POV Executive Director Erika Dilday, “On The Divide not only allows the people of McAllen,Texas to frame the issue on their own terms and in their own voices, but elevates and broadens the larger cultural and political conversation about reproductive health.”

Cueva and Galant worked closely with organizers and people from the area of McAllen and the Rio Grande Valley to ensure community representation was centered in the storytelling. The diverse, women-led team included local crew from McAllen or Texas, such as the film’s associate producer Gisela Zuniga and field producer Omar Casas.

On the Divide is a Fishbowl Films production in association with Giving Voice Films, Willa Productions and Latino Public Broadcasting, and is a co-production of POV. The film will be available for streaming concurrently with its broadcast on all station-branded PBS platforms, including PBS.org and the PBS Video App, available on iOS, Android, Roku streaming devices, Apple TV, Android TV, Amazon Fire TV, Samsung Smart TV, Chromecast and VIZIO. PBS station members can view many series, documentaries and specials via PBS Passport. For more information about PBS Passport, visit the PBS Passport FAQ website.

Romney To Stump For GOP Hopefuls In West Virginia

Ohioans Can Apply for Amnesty to Settle Unreported Tax Debts