What happens once you’ve found the bravery (or, some would say, the foolishness) within yourself to finally chase your improbable dreams, only to find them crumbling around you in ways at once more tragic and more comical than you could have ever imagined?

Such is the story of Bobbi, protagonist of West Virginia-based filmmaker David Smith’s most recent percolating comedy film project, a comedy entitled “Two Steps Back.” The film is being shot entirely in West Virginia, and principally in Huntington and the Fayette County area. 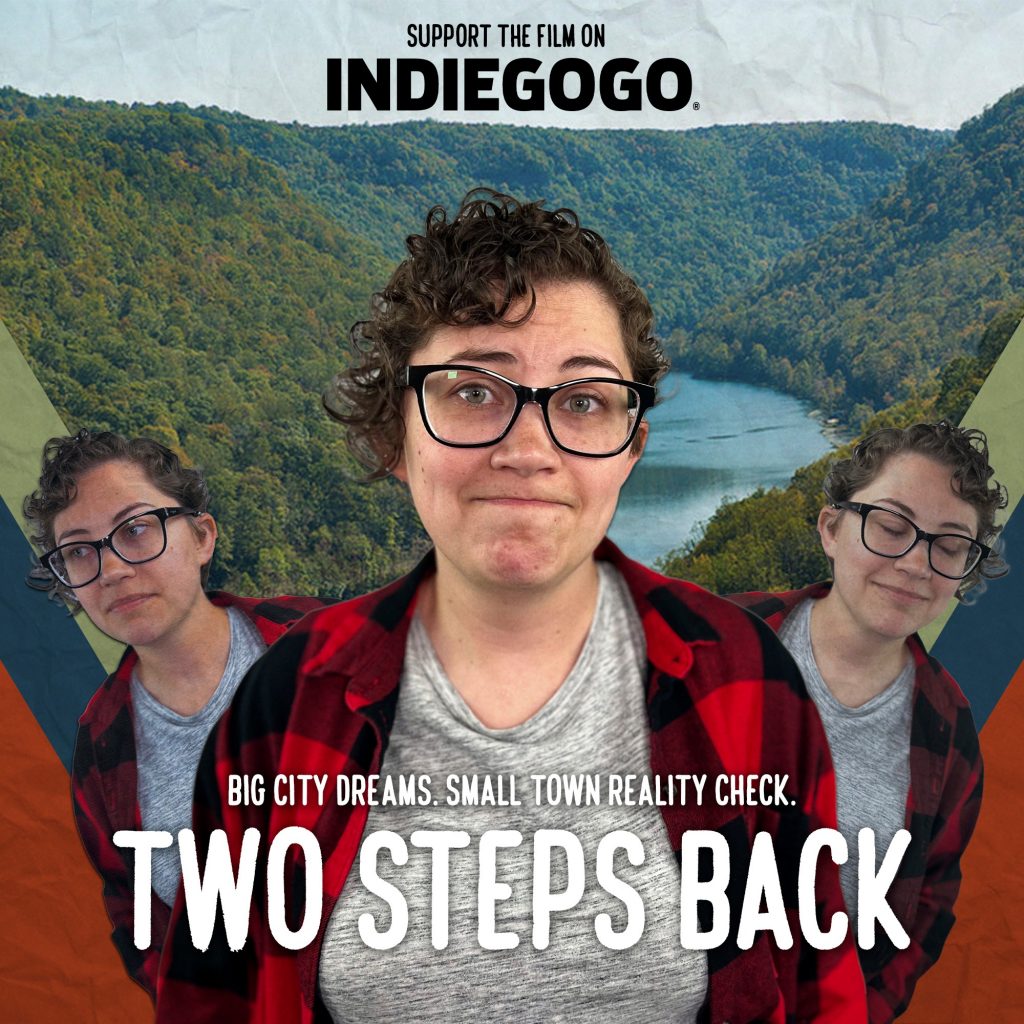 We meet Bobbi (played by actor Abbey Miskowiec) six months after she turns 30. Deeply dissatisfied with the discrepancy between the life she’s made for herself in Huntington, WV, and the life she’d always imagined for herself as an actor in New York City, Bobbi picks up and moves to the fabled Big Apple, the land of hopes and dreams where just about anything can happen (in theory).

She almost immediately fails and has no choice but to move back in with her parents in Huntington. The film follows what unfolds next for Bobbi.

Smith is the perfect filmmaker for this project, and for a variety of reasons. He’s won several 72-hour film contests, and his 2016 film “State Inspection” played at film festivals all over the country. Smith’s work is often comedic, drawing attention to the absurdities – but also the beauty and inherent value – of each moment of a seemingly ordinary life.

Smith began writing “Two Steps Back” shortly after having an experience not unlike Bobbi’s. Several years ago Smith figured, much like Bobbi, that if he was going to ever shoot for his lifelong dream of being a full-time filmmaker, he couldn’t wait any longer.

He quit his full-time day job and withdrew all of his retirement savings, hoping that if he moved home and worked at the post office for a bit, he’d have what he needed to move to L.A. Smith had already landed the post office job when he moved back home, but he was still waiting on a clean background check before he would be allowed to start the position. Knowing that he didn’t have much besides a speeding ticket on his record, Smith was pretty confident things would work out. However, in a twist of fate that is practically Kafkaesque in nature, that’s not quite what happened.

“So, my name is David Smith. It’s very common name — common enough that through some bizarre clerical error, there was a hit on my background check from some other David Smith who had committed a crime and went to prison — when I was 15 years old,” said Smith. “I was able to figure out the mistake in five minutes, but it took the background check agency about three months to resolve the discrepancy. I couldn’t not work for three months, so I got another job — one that paid less than the post office. And although I love my family, I realized pretty quickly that I wanted to get back out on my own as soon as possible, so instead of waiting and working the job where I made less money until I had enough saved to move to L.A., I just moved back to Huntington and started writing ‘Two Steps Back.'”

Although Bobbi’s story takes a lot of cues from Smith’s, as “Two Steps Back” has been developed, it’s become clear that he’s not the only one who relates to Bobbi.

“I think the trajectory of the character Bobbi, being this person who lives in West Virginia and desires to be a creative professional, really mirrors the life and experience of really everyone kind of working on the crew,” said Nathan Thomas, one of the film’s producers. “We are all people who desire a career in the arts, but whether it be due to economic circumstance or a variety of other factors, a lot of us have to work day jobs to make ends meet. And then our creative life is the things that we do outside of that. So in a way, the way our main character Bobbi tries to bet on herself and leave West Virginia to pursue that creative life parallels us really just taking this moment in this movie to bet on ourselves and to try to reach the point where we can have that creative life.”

As “Two Steps Back” begins, Bobbi is listening to a guided meditation on her phone. Smith heard the very same guided meditation while writing the script. The meditation is a Zen kōan, which the Encyclopedia Britannica defines as a paradoxical statement or anecdote intended to “exhaust the analytic intellect and the egoistic will, readying the mind to entertain an appropriate response on the intuitive level.”

The kōan tells the story of a traveling monk who comes upon a cliff while fleeing a tiger. To escape the tiger, the monk grabs hold of the root of a vine and swings themselves over the side of the precipice. Clutching the vine and hanging perilously over the cliffside, the monk realizes another tiger is prowling far below them, waiting their fall.

“So the monk is hanging from this vine and it doesn’t seem like there’s any way out. And then they see a strawberry in front of them. They reach for it, and they eat it. And it was the best tasting strawberry the monk ever ate. That’s the entire story,” said Smith. “And in the guided meditation, the meditation coach goes on to explain that this is a story about gratitude — about how we need to be happy with where we are and with what we have. And it’s like ‘hey! I can see that,’ but at the same time, my first thought was ‘well, what if there is a platform in front of the monk, on the cliff? And the monk didn’t realize because they were too focused on tasting the strawberry?”

Smith said the kōan reflected themes he was grappling with after moving back in with his family and deciding not to move to L.A. after all.

“The thought was sort of like, well, I should be happy with what I have and where I’m at — because there certainly are lots of things to be grateful for. But, if I’m too grateful, does that make me less motivated?” said Smith. “So, the movie ends up being about learning to wrap your head around the struggle between being grateful for what you have in your life and maintaining ambition. Because, depending on who you are, you can’t really switch off your ambition. So yeah, it’s about trying to wrap your head and heart and mind and everything around all of that.”

Find more information about “Two Steps Back,” and about how you can donate to the production, at TwoStepsBackMovie.com.