Concertgoers braved tornados and torrential rain for the show, which ska-punk rockers The Interrupters couldn’t take part in after being taken out by a last minute positive COVID-19 test. 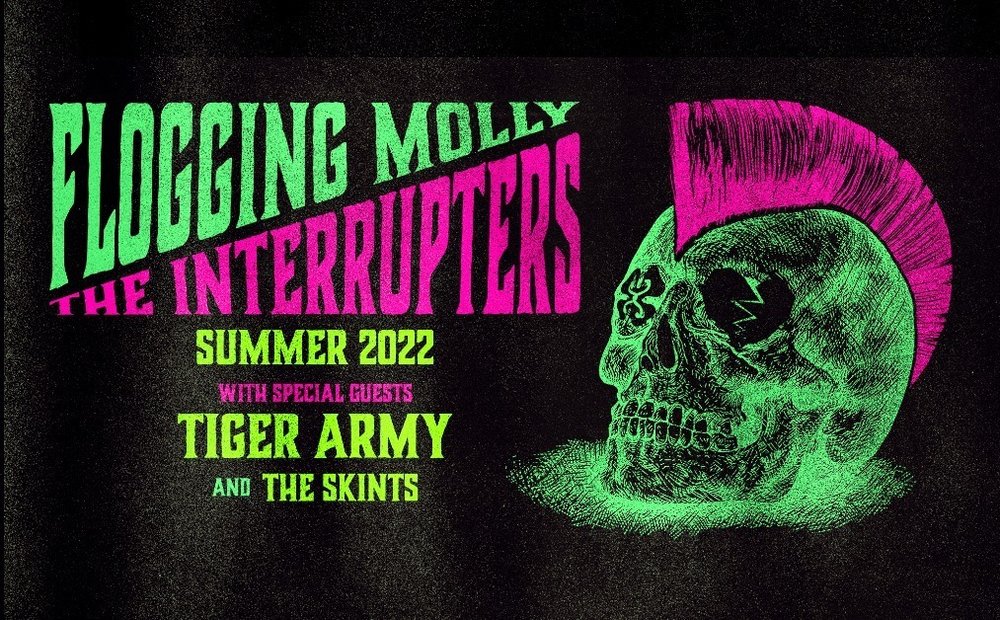 The Skints, a London-based reggae-punk trio opened the show, warming up the crowd with their spacey, reverb-drenched dub-inspired sound. While they might have been a little on the mellow side for some Flogging Molly fans, their final song was raucous enough to resonate with the eager crowd. Band member Marcia Richards impressed me with her rapping skills and ability to play multiple instruments.

Tiger Army, a California-based psychobilly trio, came on next, building on the Skints’ momentum. Moshing began during their set, with Tiger Army’s “F*ck the World” raising the energy level.

After Tiger Army left the stage but before Flogging Molly came on, members of the venue’s security team came onto the floor. I asked a fellow concertgoer what they were doing, and they replied they were discouraging moshing, claiming to be doing so on behalf of the headliner.

I found this strange, because the first thing anyone knows about a Flogging Molly show is that they can depend on a sizable and energetic mosh pit!

Speaking of energy levels, if the Skints were a two on the energy scale, Tiger Army was a seven, and Flogging Molly turned it up all the way to 11.

Flogging Molly kicked off their set with “Baba O’Riley” playing over the PA, the lights coming down right as Roger Daltrey sings “they’re all wasted!” – at which point the band came on and launched right into “Drunken Lullabies,” bringing a simmering crowd to a full boil.

Regardless of anyone’s wishes, as soon as Flogging Molly’s set began the moshing started with joyful abandon and noticeably with the smiling approval of several band members. People flung themselves in a furious circle while others formed a barricade to prevent any centrifugal force from escaping and harming innocent bystanders.

After hurtling through an hour and a half of music and their encore (the buccaneer-themed “Salty Dog”), the band closed out their show by leading the crowd in a sing-a-long of “Always Look on the Bright Side of Life”, the cheerful end-of-life anthem from Monty Python’s 1979 classic comedy “Life of Brian.” Band members threw guitar picks, drumsticks, and set lists for the adoring crowd before retiring for the night.

Did Dave King, Flogging Molly’s lead singer, ever think he would be doing this at the ripe old age of 60?

King’s career started in 1983 as vocalist for the heavy metal band Fastway, a supergroup founded by guitarist “Fast” Eddie Clark (Motörhead) and bassist Pete Way (UFO). Singing like Robert Plant was lucrative in those days, but it didn’t lead to a long career for most.

After Fastway, the Dublin-born King returned to his roots and married that raucous guitar sound with traditional Irish instruments. Flogging Molly’s debut album was released in 2000 and they have been one of the most unique sounding punk bands ever since. They often are compared to Boston rockers the Dropkick Murphys, but the Irish trappings of that band didn’t become predominant until their third album, whereas Flogging Molly’s sound came out fully formed on their debut.

On stage, King was bursting with energy, running from one side of the stage to the other, jumping up and down, and sharing cans of Guinness with audience members.

“They need to bring back the Warped Tour,” he remarked, “so we can see some new up and coming bands, instead of old farts like me.”

King heaped praise on the opening acts and his fellow bandmates several times throughout the show, demonstrating that at its core, punk has always been and always will be about community and mutual support.

Flogging Molly plays the Jacobs Pavilion (2014 Sycamore St.) in Cleveland at Nautica Sunday, June 19 and Columbus Saturday, June 25 at Kemba! Live (405 Neil Ave.). Tickets can be purchased through links at floggingmolly.com/tour. I would highly recommend catching them if you can. Nothing can quite restore your faith in your fellow humans quite like a Flogging Molly show.

How to Prepare for College