Live From Washington, D.C. with an All-Star Cast and Fireworks!

Featuring 65th Anniversary Celebration of West Side Story with Broadway Icon Chita Rivera, Salute to the 100th Anniversary of the Lincoln Memorial, and  Special Tribute to our Military Heroes and their Families with Rachel Platten

Capital Concerts announced the all-star cast of the 42nd annual edition of A CAPITOL FOURTH on PBS, America’s longest-running live national Independence Day TV tradition.  Joining country music star and four-time Grammy-nominee Mickey Guyton, who will be hosting and performing during the celebration, will be top stars from pop, country, R&B, classical and Broadway with the National Symphony Orchestra.  After making history as the first African American female artist to earn a Grammy nomination in a country category, Guyton went on to host the 56th Academy of Country Music Awards and performed the “National Anthem” this year at Super Bowl LV in front of an audience of 112.3 million.  The line-up for A CAPITOL FOURTH will feature:

Chita Rivera, the legendary Tony Award winner and one of the most nominated performers in Tony history, will lead a 65th anniversary celebration of WEST SIDE STORY featuring the National Symphony Orchestra performing a special musical tribute to one of Broadway’s most successful shows.   A theatrical icon, Rivera’s electric performance as Anita in the original Broadway premiere of WEST SIDE STORY in 1957 brought her stardom.

The evening will also include a special tribute to our men and women in uniform and their families by Emmy Award-winning, multiplatinum selling recording artist and published author Rachel Platten who will perform her hit song “Stand by You.”

The concert also marks the 100th anniversary of the Lincoln Memorial, one of America’s most famous and majestic landmarks.  It was built as a tribute to a President whose leadership united the nation in a time of crisis, and whose eloquence spoke to our aspirations and dreams of a better tomorrow.  The segment will be feature a stirring performance of “Battle Hymn of the Republic” by Yolanda Adams live from the Lincoln Memorial.

Returning live from Washington, D.C., the top-rated, award-winning program available on television, radio and digital media puts viewers front and center for America’s biggest birthday party.  The celebration will be capped off with the greatest display of fireworks in the U.S.A. lighting up our nation’s iconic skyline featuring twenty cameras positioned around the city to capture the best views. Accompanied by patriotic musical favorites, the fireworks extravaganza will also feature The U.S. Army Band “Pershing’s Own,” with a commemoration of its 100th anniversary. 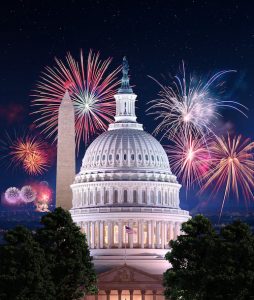 A CAPITOL FOURTH airs on PBS Monday, July 4, 2022 from 8:00 to 9:30 p.m, as well as to our troops serving around the world on the American Forces Network.  The program will be streaming on YouTube and www.pbs.org/a-capitol-fourth and available as Video on Demand for a limited time only, July 4 to July 18, 2022.

After two years of virtual presentations due to the COVID-19 pandemic, the concert venue on the West Lawn of the U.S. Capitol will be open to the public to enjoy the live broadcast of A CAPITOL FOURTH.

Also participating in the event will be the U.S. Army Herald Trumpets, U.S. Army Presidential Salute Battery, Members of the Armed Forces carrying the State and Territorial Flags, the Armed Forces Color Guard provided by the Military District of Washington, D.C., the Choral Arts Society of Washington and Patrick Lundy & The Ministers of Music.

Nurse To Face Extortion Charges In Campaign Against Ohio Lawmaker