Athens musicians are known to rally around a cause.

Whether it’s the annual Athens Community Music Festival (ACMF) or Lennon Fest, where funds are raised for arts and music education, local performers can always be counted on to unselfishly deliver the goods.

That’s why it came as such a shock to the local scene when Dropdead Sons, a group that includes ACMF organizer Scott Winland, had their equipment stolen from a practice space on Sept. 13.

Not just a few items, either: More than $2,000 worth of equipment, including prized guitars, amplifiers and microphones, vanished.

When word spread via social media about Dropdead Sons’ predicament, a show was quickly organized to help the band (which also includes Chris Burget, Brandon Robinson and Chris Corbin) recoup their losses.

This Saturday, The Union will host The Stolen Gear Benefit, featuring Scubadog, The County Pharaohs, Wheels on Fire and a reunion of former local favorites Whale Zombie.

Scott Winland talked with WOUB about recent events and the upcoming show.

BG: First off, tell me a bit about Dropdead Sons. How did the band come together?

SW: Chris Burget and I met when I was attending Athens High School and he was a freshman at OU. We formed our first band with Athens native Scott Pfeiffer–a hardcore band called Colostomy–in the spring of 1990.

Scott and I started making music together in 4th grade in an a cappela Buddy Holly cover band called Paj & The Lightning Bolts. No kidding. Scott made comics of that band that I still have today! Colostomy was basically a tribute to all the stuff Burget and I were listening to: Black Flag, Dead Kennedys, Angry Samoans, etc.

We joined up with Matt Harvey and his childhood friend Brandon Robinson in 1991 and formed Flood, which later became Geraldine. Brandon and I, along with another high school friend Jason Frederick, also formed The Spiveys.

Both of these bands toured internationally and made several records. After the relocation of The Spiveys to Chicago, and the demise of Geraldine, Chris Burget and I formed Dropdead Sons with Chris Corbin in 2002. I guess you could say we’ve all played in a jillion local bands and projects together for over 20 years. 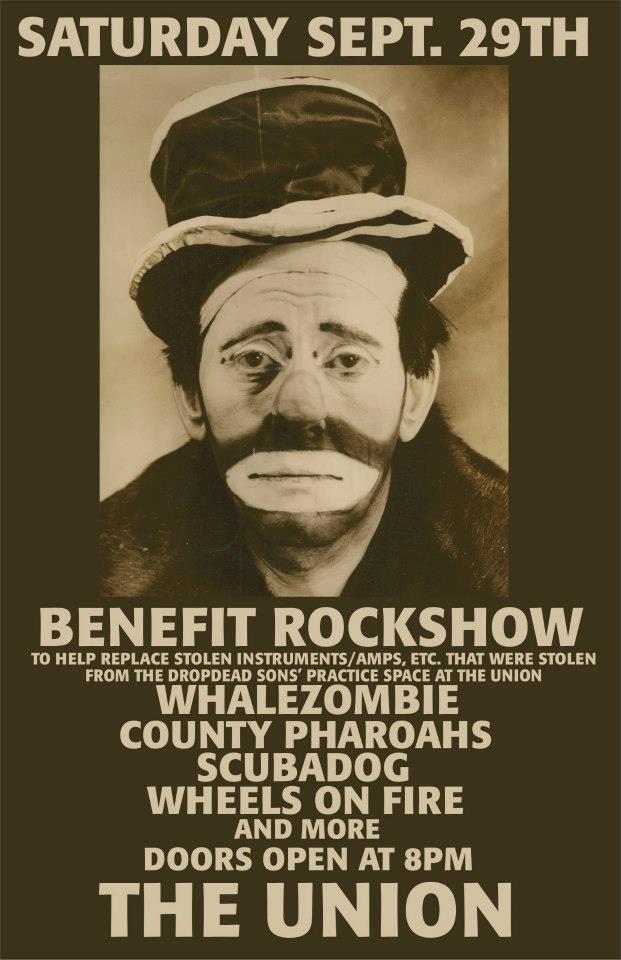 BG: What was your reaction to the break-in?

SW: I had a fever, had just taken some cold medicine and was preparing myself for a pre-Skeletonwitch show nap. I book the shows at The Union, so I often have to be there early to make sure everything is running on schedule, especially with the bigger shows.

My friend Eric Gunn (owner of The Union) called to let me know something was up. I went to The Union, realized there had definitely been a break-in, and that a ton of stuff was missing.

I met the police officer in charge of the case who asked what was missing. You have to realize, most band rehearsal spaces aren’t super-organized, and we’ve been using the space behind The Union for a over a decade. It was pretty much a mess, and with the mounting cold medicine woozies, it was pretty hard to figure out exactly what was gone.

Every couple minutes it was, “Ah crap, they got Burget’s cabinet!” and “Holy —-, they got the mics!” and then “Oh no, not the Bargoyle Telecaster!” Sad day for sure. After a couple days worth of serious inspection, we gave a list to the police.

One lesson learned: Insure your gear! Not only are you getting the coverage, but also insuring your gear forces you to write down all of the serial numbers, values and specific information you should have saved somewhere anyway. We didn’t, which makes it that much harder to track stuff down after this sort of thing happens.

BG: What does this mean for the band in the meantime, in terms of equipment?

SW: Luckily, my amp and bass were at home, and Brandon’s drums, though set up by the window to be stolen next, didn’t make it to the thief’s car, or whatever. We took a big hit with the break-in, but we’re not entirely screwed in terms of being able to play a show. A bunch of good friends around town have also offered to help out by loaning us stuff if and when we need it.

BG: How does it feel to have so many local musicians offering their services this weekend?

SW: It’s a very good feeling to know that people care and can relate to this sort of thing. Sadly, this isn’t the first time bands or musicians from Athens have had gear stolen. Far from it.

The benefit show has come together well, and we really appreciate these bands for offering to play. Whale Zombie broke up over a year ago, and are doing this show as a one-off just to help us out. Very cool.

As much as we hate asking for handouts, we could really use a hand this week. My main goal is to get Chris Burget’s stuff replaced. He’s had a really tough year, and yesterday was his birthday.

Doors will open at 8 p.m. this Saturday with a suggested donation of $5. For more information, visit The Union’s Facebook page.