The Athena Cinema is about to celebrate a birthday few other movie houses in the nation can claim. On June 3, the Athens theater will mark 100 consecutive years of operation.

On June 3, 1915, the grand opening of the Athena featured the popular Mary Pickford silent film Cinderella. To mark its centennial, the theater is hosting a free open house birthday celebration, featuring a rare screening of that film, complete with musical accompaniment.

In keeping with the centennial spirit, the theater is offering the same admission price it did in 1915—five cents for children and 10 cents for adults.

Athena Operations Director Alexandra Kamody said securing the rights to screen the picture was a challenge but well worth the effort.

“We were incredibly lucky to be able to locate this film and secure the rights to play it,” she said. “The odds that we would find it seemed very slim at first since it’s estimated that between 75-90% of silent films have been lost. After a little digging, we found out about the Mary Pickford Foundation in Los Angeles. When we reached out to the Foundation with a copy of the Grand Opening ad from 1915, they were thrilled. They have been instrumental in helping us bring back the film 100 years later.” 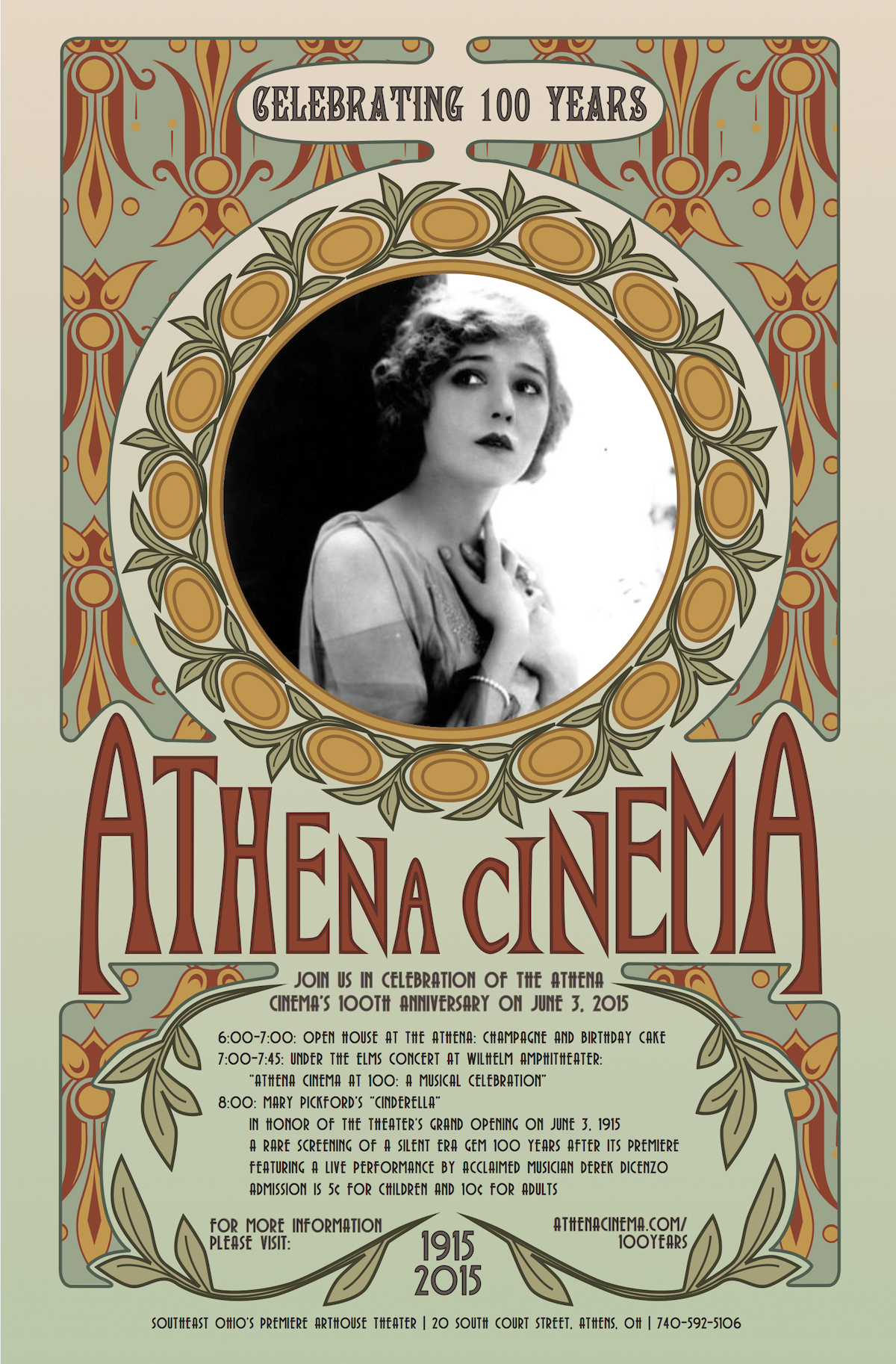 The celebration will begin with a free community open house at the theater from 6-7 p.m. As a nod to Athens’ local food options, the event will feature cake from several area bakeries and restaurants, including Casa Nueva, Purple Chopstix and Fluff, along with complimentary champagne.

Guests are then encouraged to walk down Court Street to the Wilhelm Amphitheater in front of Scripps Hall for the Ohio University School of Music’s popular Under the Elms Concert Series. The free concert, titled “Athena Cinema at 100: A Musical Celebration” pays homage to movies, vaudeville and the year 1915. (The 2015 concert series has moved to the Wilhelm Amphitheater due to construction on OU’s College Green).

Following the concert, guests will return to the Athena Cinema for the 8 p.m. screening of Cinderella. The rare screening of this silent-era gem will feature a live performance by musician Derek DiCenzo.

This is a one-time only event and seating is available on a first-come, first-served basis. Commemorative posters and t-shirts and memberships to the Athena Cinema will be available for purchase.

The Athena Cinema will be hosting several events throughout 2015 to celebrate its rich history. Learn more about the 100th anniversary programming at athenacinema.com.

7-7:45 p.m. UNDER THE ELMS CONCERT AT WILHELM AMPHITHEATER: “ATHENA CINEMA AT 100: A MUSICAL CELEBRATION”

ADMISSION IS 5¢ FOR CHILDREN AND 10¢ FOR ADULTS