Imagine awaiting the arrival of your first child. You discover your first-born will be a girl and should arrive around Christmas. Who could ask for a better Christmas present? You begin thinking about her life, her personality and her dreams. You want her to have the world; you want her to experience everything you could not. As it nears closer to Christmas, you wonder if you are ready. Well, ready or not here she comes. However, what happens when things do not work out as planned? For my parents in December 1992, this was the exact scenario. They dreamed of their first child as previous attempts had unfortunately failed. As an older couple, my parents knew their first child would be a miracle.

My father, Greg, was born and raised in Marion, Ohio. He was your average brown haired, brown-eyed boy, who loved to play football and “take care of business.” As he finished high school, he joined the United States Navy. Once his Navy career ended, he returned to Ohio and landed positions within the Ohio Correctional Institutions. Before long, he found himself working as a boiler operator at Whirlpool Corporation in Marion, Ohio—where he met my mother, Mary.

Unlike my father, my mother lived a different childhood. Due to her mother passing at a young age, my mother spent considerable time in a children’s home. Eventually, a couple from Richwood, Ohio, adopted my mother and her half-brother. Despite the rocky start, her feisty red haired personality did not keep her down. With her love of animals, my mother became a successful farm hand on her adoptive father’s farm and considered a career as a veterinary assistant. However, after having her dream foiled, she settled for several minimum wage positions. On a chance for better pay, she accepted a position at Whirlpool Corporation in Marion, Ohio.

In 1990, my parents married and they graciously awaited the arrival of their first child. Despite unfortunate losses, their dream would come true on December 23, 1992. With my father’s brown hair and my mother’s red hair, they were expecting a dark haired child. Additionally, my father’s brown eyes prompted the arrival of a child with darker colored eyes. However, upon my arrival this was not the case.

From the time I was born, my parents knew something was different. I was born with white hair, extremely pale skin, and bright blue eyes. As they looked into my eyes, they noticed they wildly danced back and forth. What did they do wrong? New parents are expecting a perfect child; a child who will rise to the occasion and excel where they could not. As they held their precious baby girl, they wondered what her life would be like. Would things work out? While my parents did not know my condition until later, they received a child with Albinism.

I did not receive a diagnosis of Oculocutaneous Albinism until around six months. While being treated for a clogged tear duct at Nationwide Children’s Hospital in Columbus, my parents were urged to see pediatric ophthalmologist, Mary McGregor. In this appointment, Dr. McGregor, revealed my condition—Oculocutaneous Albinism, Nystagmus, Strabismus Astigmatism, Photophobia, Nearsightedness, and Farsightedness—and that I would be legally blind.

Imagine the latest and greatest vacuum cleaner—it will suck up everything. As my parents received the diagnosis, their hopes and dreams for me went straight to that vacuum. Legally blind? How will she get through school? Will she go to college? Is she going to drive? What will her future entail? All these questions zoomed to the surface following that appointment.

From that day forward, my parents were not going to let me fail. While I needed assistance, they pushed for my independence. They were determined to help me reach my goals—no matter how farfetched they seemed. The only dream we struggled over, however, was my dream of driving.

By age 16, I had accepted the fact my vision was not acceptable for driving. I mean, who would put someone with 20/100 vision behind the wheel? If you ask me that is a death wish waiting to happen. As I glided into my junior and senior years of high school, I relied on my parents and my friends for transportation—for some situations, this became awkward to say the least. While looking into colleges and future career paths, my Orientation and Mobility Specialist, Dan Zink, suggested bioptic driving. Bioptic what now? You want me—the girl who cannot see a giant American Flag—to drive? Essentially, I was dumbfounded at the idea—how would I drive with my lackluster vision? Even with my resistance, he pushed the idea. While, at the time, I decided it was not my thing, I am glad he continued pushing.

As I ventured into my college career at Ohio University, I began to examine the realities of being dependent on someone—especially for transportation. I needed to ask someone to go anywhere off campus—this included Kroger, Wal-Mart and field experiences. I HATE asking people for assistance—I strive to be as independent as possible—and asking for rides became bothersome. Additionally, I was tired of being the 20-something who needed her parents and/or friends to drive her anywhere and everywhere.

Therefore, I created a blanket fort in my dorm room with my computer, a giant cup of coffee and a plan. I began researching bioptic driving. I wanted to know everything—equipment, testimonials, requirements and pitfalls. Eventually, I stumbled upon the requirements for Ohio and hoped I could qualify. I needed to have 20/70 vision in my better eye to qualify for a daytime only license. That is easier said than done. In knowing the visual acuity necessary for licensure, I began making appointments with the Ohio State University College of Optometry’s Low Vision Rehabilitation Clinic. Additionally, I made an appointment with Vision Rehabilitation Services in Columbus. Through these appointments, I found I qualified for a driver license by using the bioptic as an enhancement—better than I expected.

Once I found this crazy idea could become a reality, I was more than determined to make it happen. The next step was determining my needed equipment—the bioptic. The bioptic allows me to read signs, traffic lights and see obstacles that I otherwise cannot see. I call it my “see everything spying machine.” My bioptic is mounted on a separate pair of glasses, which carry the prescription of my regular glasses. When looking through the bioptic, the magnification is 4x, which is a lower amount of magnification. With my new equipment in hand, it was time to get a driver license.

During the summer of 2013, I began my 20 hours of bioptic driver training in Columbus. Until that Tuesday after Memorial Day, I had never driven a car—my nerves mimicked that of a spastic bug. Over the next two weeks, I spent 3 hours a day during the week learning how to operate a moving vehicle. Throughout my training, my instructor had me all over the Franklin County and Delaware County area—I sometimes felt like a chauffeur. By the end of my training, my instructor scheduled my exam with the Bureau of Motor Vehicles in Hilliard, which one of two bioptic exam stations in Ohio. I was scared out of my mind. 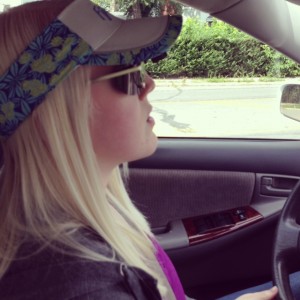 Unlike typical drivers, my test consisted of three parts—environmental sign reading, maneuverability and residential/business streets. To an outsider, this may seem easy—I laugh at you all. It is not easy by any means. When participating in the environmental sign reading the examinee must read all and any signs on the course while being a passenger. Additionally, the examinee must state traffic light colors, break lights (on/off), crossing signals, the state of traffic, and pedestrians. The examinee must do this while the car is in motion and from a parked standpoint. I have never talked so fast or so much in my life! Once the environmental portion earns success the examinee moves onto maneuverability. Like all drivers, I hated this portion of the test. In fact, I failed this portion during my first test. Those cones grew legs, I swear! Despite this, once the maneuverability is passed, examinees continue to the residential/business streets road course. Here is where the examinee drives like an angel. With two evaluators in the car and typical summer traffic, I passed my road test with excellence—the evaluators were actually impressed. By passing all sections, I earned my daytime only, residential/business streets only, bioptic driver license. This little card meant the world.

With my paperwork in hand, I walked up to the counter at the BMV in Marion County and received my bioptic driver license. What a happy day. From that point on, I knew my life would be more independent and fulfilling. Over the next year and a half, I improved my skills and maintained accident and citation free. With this improvement, I qualified for nighttime bioptic driver training—which I knew would be its own animal.

Nighttime training required me to deal with headlights and, of course, the darkness. As someone who is considerably light sensitive, I worried I would not be able to handle it. However, to make a long story short, in December 2014, I passed the same three section driving exam and earned my nighttime and highway privileges. I am sure I wore the same huge smile for a week.

From the time I was little, I was told I would never drive—it was not possible given my visual acuity. While I was a shy a quite child, I never let “no” slow me down. By the time I graduated high school, I was determined to make things possible. I was raised to work for what I wanted and my independence was something I desperately wanted. Now as a graduating college senior, I can say my independence level has skyrocketed. I now have the freedom to come and go as I please. While most obtain their license at age sixteen, they take for granted the opportunity they are given. I needed to work for my driving privileges; I needed to prove I was capable of handling a huge responsibility. While I did not receive a full bioptic driver license until shortly before my 22nd birthday, it was worth the wait.