Palliative Care Still a Challenge for Many (interactive map)

WASHINGTON – For patients needing palliative care, a specialized medical care for those with a serious illness, they now have less than a 50 percent chance to get access to it. In a state like Wyoming, their chances drop to one in six.

The United States recently received yet another B rating, as it did in 2011, from the Center to Advance Palliative Care, for its overall performance regarding the provision of palliative care. While a B rating may seem satisfactory, the data say otherwise.

According to the National Institutes of Health, palliative care is different from hospice in care in that it is a “comprehensive treatment of the discomfort symptoms and stress of serious illness.” This medical specialty seeks to help chronically ill persons with diseases such as cancer, kidney disease or dementia.

A palliative care team can involve psychologists and family therapists for emotional support, health-care coordinators to ease the administrative process and nutritionists, among other specialists focused on improving quality of life. Hospitals that offer a palliative care program can be found on the Get Palliative Care website. 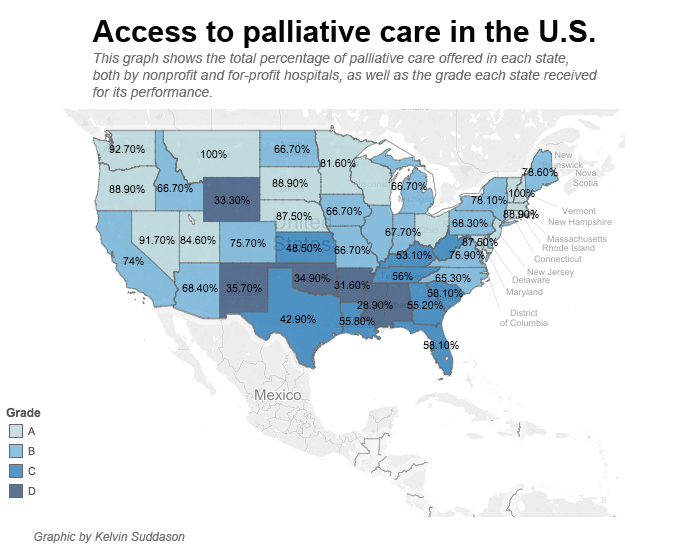 But while there are no states failing this year, the report shows that there is still work to be done.

Despite a 4 percent increase between 2011 and 2015 in the number of palliative care teams in hospitals with 50 or more beds, and 90 percent of large hospitals providing such services, it seems that hospitals overall are not meeting the palliative care needs of seriously ill patients.

On average, of those patients admitted to hospitals who need palliative care, less than half were able to receive such medical care. According to the report, between 1 million and 1.8 million patients every year who could receive palliative care were not benefiting from such services.

This underperformance by hospitals is due to an insufficient workforce, a consequence of palliative care being a new medical specialty, Sean Morrison, director of the National Palliative Care Research Center, said. A lack of funding has also been a major barrier.

“Palliative care training spots in the country are funded by private sector philanthropy. There is not Medicare funding for specialty training,” Morrison said. He said that, because palliative care is a new specialty, a third of all states do not yet have training programs for this specialized medical care.

As a result, the study found that “hospital palliative care teams are often overstretched and unable to see every hospitalized patient who could benefit from their services.”

Morrison said this trend can be reversed at medical schools.

“Differences in palliative care availability in for-profit as compared to nonprofit and public hospitals are unknown,” the report said, given that palliative care is associated with lower hospital costs.

Hospitals could save thousands in providing palliative care. Despite a preference for comfort and relief care, many chronically ill patients receive low-yield, burdensome and high-cost tests and treatments, including prolonged stays in intensive care units. Palliative care would discontinue these costly, non-beneficial and often unwanted interventions.

According to another study published in 2008, palliative care service could lead to a reduction in direct hospital costs of almost $174 per day for patients discharged alive. For an average 400-bed hospital offering palliative care to 500 patients a year, the net savings could amount to $1.3 million a year, even after removing physician revenues and extra personnel costs.

“Palliative care is one of the few areas of medicine that has been shown to achieve the triple aim of health care: better care, higher satisfaction with care, at lower cost,” Morrison said.