Maysville’s Chase Roberts drove the Panther offense in 2015, piling up over 1,000 total yards and wearing several hats for Maysville. His efforts landed him on Gridiron Glory’s player of the year finalist list. Tune in to WOUB on Friday, Nov. 20 at 11:30 to find out if Roberts takes home the trophy.

Below, you will find more about Roberts and his journey from a story Gridiron Glory published on Oct. 25.

Inside of every well-oiled machine is a set of cogs and Maysville’s machine is no different.

In its case, Chase Roberts is the key cog.

He’s also one of the most versatile. Through nine games, Roberts leads Maysville in rushing with 630 rushing yards and nine touchdowns, on top of an additional 317 receiving yards off of 17 receptions.

The numbers don’t stop on offense: Roberts has nabbed four interceptions on the defensive side of the ball. That kind of versatility makes Roberts one of the league’s most dynamic athletes.

According to Maysville head coach Craig Clarke, Roberts is proud to contribute that versatility to his hometown team.

Roberts has been an integral part of Maysville’s program, making sizable contributions to the team since his freshman season. His raw talent drew attention early on in his career and Clarke has seen Roberts grow in the four years since.

That growth has come with an expanding set of expectations.

“As Chase goes, that’s the way our team is going to go,” Clarke said. “The community has high expectations of him, and they like to see him with the ball. They’re behind the whole team, but Chase is a huge part of that.” 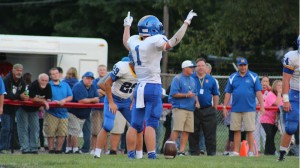 With Roberts’s role in determining the team’s success, it’s no surprise the program has flourished with him on the roster. Maysville has made the playoffs each of the past three years, winning its opening round match-up each of the last two years.

This run of success has turned Roberts into a symbol of success for Maysville’s program, but the foundation for his success was literally and figuratively laid long before his tenure with Maysville.

Roberts’s grandfather, a longtime community member and program supporter, actually assisted in the building of Maysville’s football complex. Among other duties, including volunteering to clean said facilities, Roberts’s grandfather became an equally vital part of the program.

“He’s been around Maysville a long time, especially our class,” Roberts said. “He’s taken our whole team in, and even took me in when I had family troubles.”

A love for Maysville football is in Roberts’s blood, but Clarke said it runs even deeper than his most memorable plays would indicate.

His physical runs and game-changing plays capture most of the attention, but one of his greatest talents is seldom noticed: his willingness to block for others.

“He wants to be successful, but it doesn’t come to maybe his own success. Chase is a very well rounded team player,” Clarke said. “That goes a long way in our success, and he’s very important to it.”

Maysville missed Roberts’s versatility last season when injuries to his hand, ankle, and knee forced him to sit out several games down the stretch of the season. This year, Roberts’s health sits atop his priority list, both for him and his team’s sake.

“It was tough,” Roberts said about his working through injury. “It’s still been in my head a little bit because I never want to be back in that position. I had to work real hard to get all the bumps and bruises out of the way so I can be successful now.”

Maysville’s playoff picture became a bit cloudier after Friday’s week nine loss to Tri-Valley, meaning Roberts’s chances at a fourth consecutive postseason trip are in jeopardy. Regardless of whether or not Maysville’s playoff hopes come to fruition, Roberts has made an impact.

His passion, resilience, and roots in the community have spawned an impressive track record as a Panther. Roberts’s grandfather may have given him his first look into Maysville football, but he has established a tradition of success on his own; success the Maysville community will be hard-pressed to forget.