June 24 the Reduced Shakespeare Company will bring their The Complete History of Comedy (Abridged) to the Peoples Bank Theatre in Marietta. The company, which has been condensing every subject from the complete works of Shakespeare to American history for nearly 30 years (often to comical effect) comes to southeast Ohio after their initially scheduled performance of the work, which had been slated for January, was cancelled due to hazardous weather conditions.

The company has toured the world and a good majority of the United States, bringing their lively productions all over the globe. Their first three shows, The Complete Works of William Shakespeare (abridged), The Complete History of America (abridged) and The Bible: The Complete Word of God (abridged) were performed for a whopping nine years at the Criterion Theatre in Piccadilly Circus. At the time of the performances, they were London’s longest-running comedies.

WOUB’s Emily Votaw spoke with long-time company member Austin Tichenor before the show at the Peoples Bank Theatre, touching on everything from the dark nature of comedy to the age-old question of “are fart jokes ever funny?”

WOUB: I’ll dive right in! Could you please tell me a little bit about The Complete History of Comedy (Abridged)?

Austin Tichenor: Well, it’s our ninth stage show, and, in many ways, it’s the subject that we were born to reduce. We spent our childhoods watching Warner Brothers cartoons, Marx brothers and Abbott Costello movies and Monty Python. All those years wasted watching silly comedies turned out to be important research for this very important reduction!

WOUB: Could you tell me about “reducing” the topic of comedy? Humor seems to be something you can find throughout all the company’s productions.

AT: You’re 100 percent right in that the history of comedy runs through all our shows, really. So that was the challenge for this show: usually when we’re dealing with the history of comedy it’s while we’re reducing something else, the History of America or All the Great Books or the Complete Works of Shakespeare, so this time we had to dig a little deeper and find out: why is comedy so important? In many ways that’s the most important topic that we cover and we realized that comedy’s roots go back to the very beginning. People have had a sense of humor since the very beginning. The first time some caveman tripped on a banana peel and everybody started laughing; that was the first joke. There’s a song that I sing in the show which is basically a list of all the things that made me laugh until I cried growing up. It’s kind of a complete history of comedy abridged, abridged. At the very beginning of the song, I sing: “I laughed until I cried/ and thought I would die,” and the end of the song goes “because if I did not know how to laugh/ I would cry,” and I think that is kind of part of the theme of the show, that we laugh to stay alive. We laugh to get through our days, we laugh to make sense of things that are complicated or scary. Sometimes people ask me if there is anything you can’t joke about, and I don’t think that there is anything you can’t joke about – but it better be a good joke.

WOUB: So, personally, comedy means a lot to me in terms of how I look at the world. That sounds cheesy, but I am someone who laughs frequently, and I often wonder: it seems like in anything that is funny, there is an inherent degree of tragedy, even a small tragedy, do you think that is necessarily true in all cases? I don’t know myself, but I certainly think about it a lot.

AT: Well, I think laughter is one of our survival instincts. I believe that it was Mel Brooks that said that “tragedy is when I cut my finger. Comedy is when you fall into an open sewer and die.” You know, comedy is tragedy. Tragedy happens to me and comedy is sort a way of creating a distance and even a way to bring people together. One of the wonderful things; one of the best things about doing our Reduced Shakespeare Company shows, is that we get people coming to the theater and they are from all walks of life, they are black and white and gay and straight, religious and not religious and they all come together and they laugh. And laughter is really a thing that brings people together. And that’s just one of the most gratifying parts of my job.

WOUB: I was wondering, in general, as a writer, as an artist, how do you look at abridgement in general? How do you reduce a subject into 90 entertaining minutes for somebody?

AT: The trickiest part is finding a topic that we want to spend years of our lives on. We tour these shows for years and our America show, we will be touring that this fall and this will be the 22nd year that we’ve been doing it. We’ve got to be reducing topics that we love, so picking the topic is important and then it’s a matter of finding out who has a good idea about what. My partner, Reed Martin and I, will just bat ideas back and forth. Like, ‘oh well, if we’re talking about comedy, we’ve got to talk about this topic, but we also want to talk about address the issue of whether fart jokes are really funny. Reed and I have different senses of humor, and sometimes we argue about things and then we realize, ‘oh! That would be a great scene, you and I arguing about this.’ So the other challenge is finding a story, because I don’t think that people just want to see an evening of sketches, they want to see a story. There are always a couple stories going on it our shows. One always is ‘these three idiots on stage think that they can reduce this entire topic into an entire evening and they don’t know that it’s impossible,’ so that’s one story. In this particular case, we’re telling the story in this ancient manuscript that we find called The Art of Comedy, which was written thousands of years ago and there is a missing chapter and we are trying to find the missing chapter as we go through the show. These are not deep or complicated stories, but they are a thread to hang the various sketches on.

WOUB: I often interview touring musicians, and sometimes I wonder if they get sick of playing a lot of the same songs every night when they’re on tour. But they can switch it up a little bit pretty easily during a concert. How does the Reduced Shakespeare Company manage to keep performances fresh every night, even though you’re performing the very same thing night after night?
AT: Well part of it is that doing that is really the actor’s job. The actor’s job is to make a scripted performance look like it’s happening for the first time that night. And sometimes the musician’s job is to perform a song exactly like it is on the album. And that’s hard. So our job is slightly different. And the other thing — especially with the American history show, is that they keep on writing American history so we have to keep on reducing it. So we constantly update not only the America show, but all of our shows, so that keeps it interesting. And also audiences are different. Every audience has its own personality, even in the same venue from night to night. You get an audience of all people of a certain age, they react a certain way, you get an audience of a lot of old and a young people and a lot of people in between and that’s a different personality. So the live performance aspect is really what makes it fun and fascinating for us.

WOUB: If I understand correctly, the company as a whole was found in 1981. You guys have been doing this a long time. Have you found that the general sense of humor that people has changed over the years that you have been involved?

AT: I don’t think that people’s senses of humor have changed, I think that people have become used to laughing at more serious, important things. I think that jokes that were shocking 20 years ago are no longer shocking. I think people are a little more grown up now about language. The comedy show is the only one where we use the “s” word, but we do it once and we do it in a theme that is talking about the appropriateness of language. And we also warn everybody at the top of the show that this is going to happen. And we’ve never had a complaint. So we’re not just using it to shock – we’re not using it at all to shock – we’re using it to surprise and make a joke about what is and what is not appropriate in certain contexts. So I think that audiences are a little more mature than they used to be.

For more information or to purchase tickets, visit peoplesbanktheatre.com. 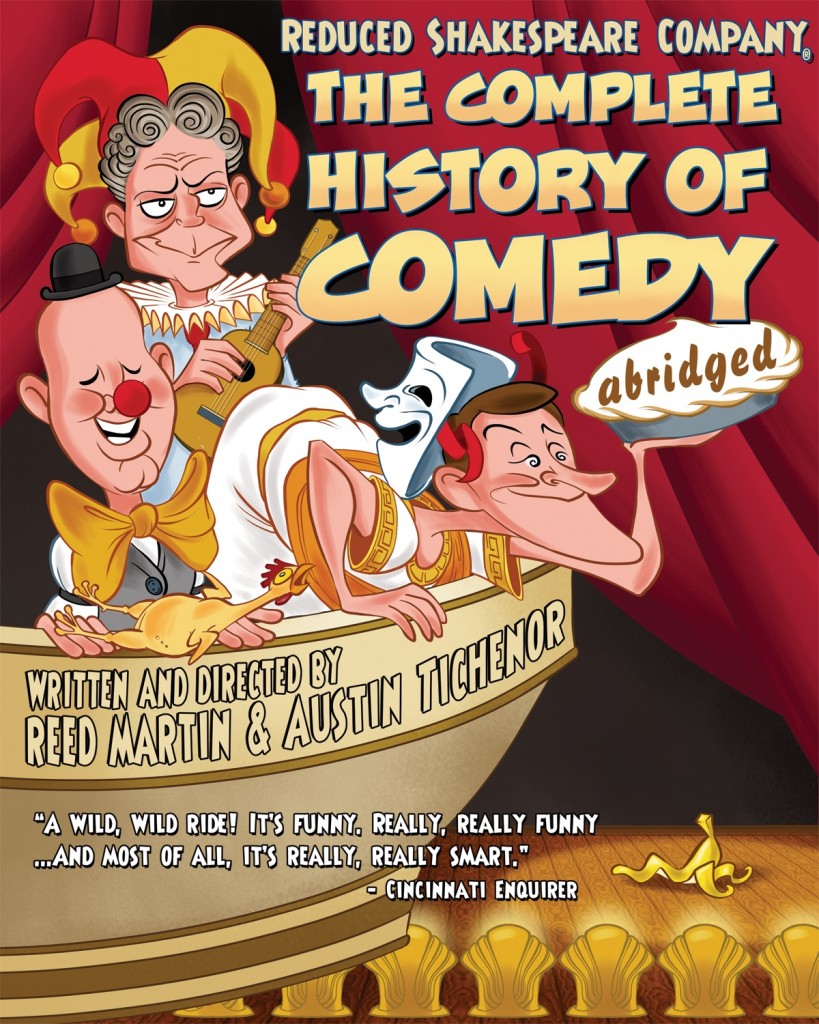 Shakespeare By the River Presents “The Taming of the Shrew”