A simple phrase comprised of only three words, but years of planning and hard work.

Ohio Soccer’s motto for the 2016 season is “Turn the Tide” and for coach Aaron Rodgers and the program, this season is setting up to change the face of Ohio Soccer. Ohio hasn’t made an appearance in the Mid-American Conference tournament since Rodgers’ first year in 2013 and hasn’t won a MAC tournament game since 2004, under then head coach Stacy Strauss. That was also the last time Ohio was crowned the MAC regular season champions.

“We have people on the team that are willing to be committed to the program and people willing to do what it takes to build a successful program,” Rodgers said. “This program has been successful in the past and we want to turn the tide back to the MAC Championship teams of the 2000s.”

Rodgers’ approach to “turning the tide” has been loading up the non-conference schedule with some tough competition. Through the first four games of the season, the Bobcats are sitting at 2-2 with quality wins over Dayton and Cleveland State. Ohio’s two losses, to Butler and High Point, were both 2-1 losses in overtime. In both losses, Ohio controlled large portions of the games.

“We want to make a name for Ohio soccer and the way to do that is to play against the best teams out there,” Rodgers said. “Dayton has been one of the top two or three programs in Ohio in Division I and for us to get that win was huge for us.”

One way Rodgers has been spreading the message is via his Twitter account. Coaches of any sporting having their own Twitter account is a bit of a rarity, let alone actively use it. For Rodgers, Twitter is just another way to grow the Ohio Soccer brand.

“[Twitter] is a cool form of social media and I try to keep it to my soccer allegiances of Liverpool and Ohio,” Rodgers said. “But it’s a great place to share to the public about the program and my philosophies and our culture as a program.” 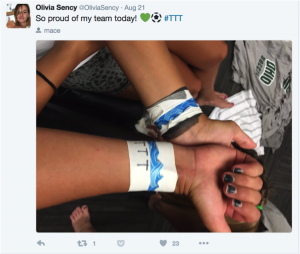 Once again this season, Rodgers will rely on four-year starter and senior captain Alexis Milesky. If the rest of the team is the ocean, think of Milesky as the moon’s gravitational pull.

Milesky has played in all 62 games in her and Rodgers’ Ohio career, and she’s been the cornerstone of the program since her arrival.

“I thought coming into this year as the captain would be super different,” Milesky said. “But the truth is, I’ve tried to lead all four years and I think I’ve done that. I’ve learned from great captains before me and it’s nice to have people come and ask me for advice.

“I’ve had to work on a lot of things individually because as leader people will always be watching me, but Aaron and Grace [Campbell] have helped and guided me to help me become a leader.”

Rodgers plan for Ohio since the day he was announced as head coach on December 22, 2012 was to return the program to its peak of the early 2000s.

“I want to create a team that is exciting, that attacks and scores goals and we are going to do that by maintaining possession,” Rodgers said that day.

Rodgers, now in his fourth season at the helm of the program, has a team fully created of his players and is expecting a big season. He brought in six new freshmen and one transfer, all of whom are midfielders or forwards. With the addition of freshmen Remi Eades, Sydney Leckie, Olivia Sency, Alivia Milesky (Alexis’ younger sister), Alli Miller, Courtney Daugerdas and junior transfer from Wright State Bryce Hueber, Rodgers’ has his deepest team since coming to the program.

“Anytime you have a deep squad, it’s a lot of competition and it’s a lot of girls stepping up and filling in when need be,” Rodgers said. “It allows us to bring in players and not have a drop of talent because the player coming on is just as good and is fresh.

Leckie and Hueber are two players who have seen extended time in the XI so far this season and both of them have wasted no time contributing to the team. Through the first three games of the season, Leckie and Hueber have combined for three goals with Hueber also having two assists.

“The team has been really welcoming and this offseason we’ve been focusing on unity and it’s really helped the transition,” Hueber said. “We are trying to be champions and if we continue to play together we will be.”

Although Hueber and Leckie are both new to Ohio, Leckie is also new to college life, but has adjusted just fine thanks to the help of her teammates.

“The coaches and the team have our backs which has made the transition into college life easier,” Leckie said. “We have weekly meetings with Aaron to just talk about life and he’s been a great mentor so far.”

Ohio Soccer Heads Into 2016 Hoping for Bounce Back Year