For the second time in two years, voters in the city of Logan will decide on marijuana reform within the city. But there is a legal loophole, which could allow law enforcement to punish those under the proposed new possession limit even if the ordinance passes.

The ordinance, submitted by the Southeast Ohio National Organization for Marijuana Reform or NORML aims to reduce penalties to zero if  you are caught in possession of less than 200 grams of marijuana. Some of the negated penalties include fines, jail time and license suspension.

The last time this ballot issue was raised it failed to pass, but did get 43 percent of the vote.

This time around, Southeast Ohio NORML President, Don Keeney, believes it has a good chance of passing because of the higher voter turnout during presidential elections.

While the ballot issue aims to eliminate the legal repercussions for possessing less than 200 grams of marijuana, a legal loophole could still put you in jail. This loophole would allow Logan law enforcement to cite people under the Ohio Revised Code rather than the city law. That means people would face the penalties set forth by the state instead of the zero penalties associated with the proposed ordinance if it passes.

Toledo passed a similar ordinance in 2015, and that was used as template for the Logan measure. Toledo law enforcement faced a similar question, however, the city has chosen to honor the local marijuana ordinance so far.

Should the Logan ballot issue pass, city leaders would have to decide how it’s going to handle these cases on an individual basis.

While arrests and their related fines typically help fund local law enforcement, the change in cash flow won’t be that noticeable, according to proponents of the ordinance.

They also believe that the ordinance could free up resources that could be used to combat the opioid epidemic affecting the state. The change in resource use by law enforcement could have a positive impact on local communities.

“We can save all that time and money, and go after some of the people that are corrupting some of the small cities and areas,” said Bill Schmitt Jr., an activist with NORML.

“They need to switch their attention,” he said. “I’ve said this all along, their attention should be on more violent, harder crimes and the heroin epidemic.”

“To be honest with you, we don’t get a lot of charges for the possession of marijuana,” she said. “We have deeper issues with opiate addiction here.”

Saving added that if the ordinance passes, she and other city officials will meet to decide whether Logan will recognize the local ordinance or stick to the Ohio Revised Code. 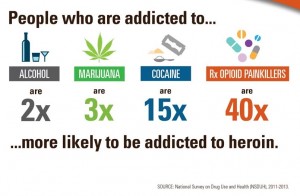 of marijuana decriminalization believe marijuana is a gateway drug, but Schmitt Jr. says the true gateway drugs are those prescribed by doctors.

His opinion is backed up by a study published by the U.S. National Institutes of Health’s National Library of Medicine, which shows a positive correlation between prescription opiate use and heroin use.

Marijuana addiction, however, has been linked to herion addition, but not in rates much higher than alcohol addition, as shown by a 2011 survey from the National Survey on Drug Use and Health.

“In my 19 years of law enforcement … there’s not a lot of people who go from using nothing to using the harder drugs,” he said. “There’s usually a stepping stone between.”

NORML has been active in Ohio for more than forty years, and its focus to change public opinion regarding marijuana prohibition.

The group praises the medical benefits of marijuana. For some in the group, marijuana is an alternative to the painkillers prescribed by doctors. Schmitt Jr. suffered from chronic pain after a car accident and he used marijuana to alleviate the discomfort.

“At that time, I started having nightmares, the pain started coming back,” he said. “I needed something and I didn’t want to get back on my medication.”

But he was forced to quit using marijuana during a custody battle for his daughter.

NORML is currently pushing for widespread decriminalization by changing the local laws of cities and villages across the state. NORML was behind the marijuana reform in Toledo, and other similar ballot issues such as the one in Logan.