Their location of choice? The steps of the Athens County Municipal Courthouse. 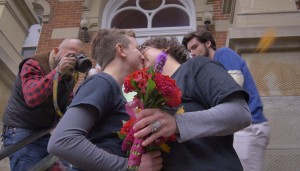 “Obviously we also love each other and we’ve been talking about it for a while, but today we were like, let’s just do it,” Marsan, a Womens, Gender, and Sexuality Studies professor at Ohio University, said. “There’s no better day than today because it has more meaning than just about us.”

After Donald Trump was elected President of the United States, many members of the LGBT community realized that they now have to live with the unwelcoming views that their President- and Vice President-elects have on the LGBT community. While many people took to social media to express their thoughts following the election, Marsan and Hansbarger decided marriage was the perfect way to stand up for their rights.

“It’s a way to fight back and I don’t really know how else to do that right now,” Hansbarger said. “We can make it harder for Trump to repeal marriage equality by having more people get married.” 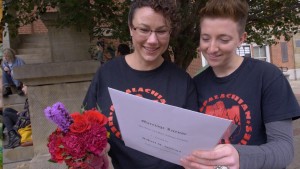 Dozens of friends, family, colleagues and students flooded the sidewalk to celebrate, making it clear that Marsan and Hansbarger’s marriage brought together more than just two people—it brought together an entire community who wanted to show their solidarity and celebrate love. 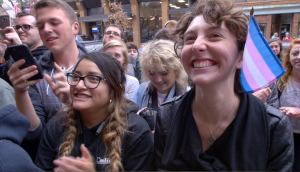 “Given a lot of the negativity, a lot of the fear people have, this is an opportunity to celebrate and to be together and to show that we’re not going down without a fight,” said delfin bautista, the director of Ohio University’s LGBT Center. “What happened last night and this morning isn’t the end.”

Love It or Hate It: The Trump Presidency is Like No Other, Says USA Today Journo