In the last two years, 20 million students nationwide have acquired internet access. However, the good news stops rolling in the hills of Appalachia Ohio. Two percent of Ohio households lack any type of web connection and the majority of that 2 percent resides in the Southeastern counties of Athens, Vinton County and Meigs.

The landscape of Southeast Ohio plays a role in broadband companies’ hesitation to try and acquire new customers, but population size is the main contributor. Inside the hilly region lay small communities and schools, many of which have students who lose their internet access when the day’s final bell rings.

Through no fault of their own, these students are growing up in an area that lacks the high return on investment companies are looking for.

Executive director of Connect Ohio Stu Johnson explains there are three things that determine an area’s ROI: “Density of population, consumption and cost of deployment,” Johnson said. “And unfortunately Southeastern Ohio suffers from all three of those.” 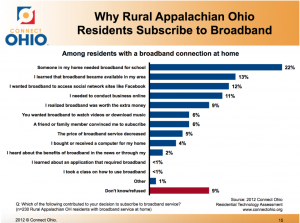 A 2012 Connect Ohio survey of 230 Appalachian Ohio residents with broadband access indicated that the top reason homes have broadband is because children needed it for schoolwork. The need is evident. Today’s students turn to the internet to research for projects and papers and complete homework.

Parent and student access to grades is now primarily done on the web. The era of the phone tree is gone. When events are cancelled, the news often comes first through social media or email.

Students without connectivity are at a disadvantage. In the education world, this is referred to as the “homework gap.” The homework gap occurs when students are limited in completing assignments because of a lack of reliable or available internet. The gap forces students to find other ways to access the web and failing to do so can impact the students’ academic success.

A national study by the Pew Research Center found that only one in ten households with annual incomes under $30,000 reported having high-speed Internet access. In Athens County, the median household income is $31,758. Athens High School principal David Hanning knows the obstacles that some of his students face, and his school is working to combat the issue.

“We have a lot of students that live in the outlying areas,” Hanning said. “They don’t have high-speed internet. It’s a big impact on what we’re able to offer from an educational standpoint because there’s a big push to use technology.”

Athens High School recently invested in seven laptop carts, each filled with 30 Chromebooks. The carts are available for teachers for class use and a cart is available in the school’s library where students can individually sign them out. Hanning says Athens has explored the option of a one-for-one program, where each student is provided a device, but the current budget won’t allow it.

The school also has changed its cell phone policy in recent years, now allowing students to use personal smartphones and tablets in downtime and in class time, if the teacher allows it.

Schools are not working alone to solve this problem. On Feb. 9, Congressman Stivers partnered with Connect Ohio and donated 18 desktop computers to Vinton County High School.

“It’s so important we expand access wherever we can,” Stivers said. “We won’t be able to solve this problem overnight. It’s going to be an investment in infrastructure; that takes a little while.”

The laptops, once used in Stivers’ office, will fill a computer lab at the high school, but for a building with more than 600 students, the donation is a small start. More than 3,000 people in Vinton County lack wired internet access. Those students without at-home connectivity are on their own to access the web.

There is one resource available for students and adults across Southeast Ohio to stay connected: the public libraries. Ohioans average the highest number of library visits per person per year in the entire country. 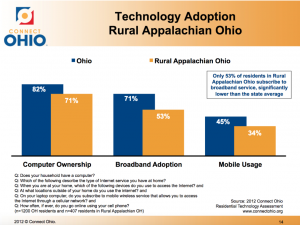 Athens County Public Libraries Director Nick Tepe does his day-to-day work at the Nelsonville Public Library and sees residents come to his libraries for web access every day.

“Every computer is filled as soon as the kids get here,” Tepe said. “Some of them are doing homework. Some of them are just blowing off steam after class and we don’t discriminate on that. It’s getting access to that technology that’s the important part.”

Justin Curtis, a sophomore at Athens High School, is one of those students Tepe sees on a day-to-day basis. Without a computer at home, Justin can be found at The Plains Library until his grandma picks him up when the library closes. For three hours, Justin is able to catch-up on schoolwork while also staying connected on social media and gaming sites.

There are only 16 public computers at The Plains Library. Justin says that when the computers fill up, which is often, users are asked to leave the computer station after an hour, unless they’re working on a school assignment.

In addition to providing internet access for the public, the Athens County Public Libraries host workshops teaching skills like résumé-building, Microsoft Office or even basic computer skills. These workshops are one way libraries are trying to bridge the digital gap, but Tepe knows the gap is vast.

“Libraries have and always will be about information,” Tepe said. “Right now the nature of information is changing so five to 10 years from now we’ll still be trying to connect people to information. I just have no idea what that is going to look like.”

The connectivity issues facing Southeastern Ohio are not going without notice. In 2014, the Athens, Fairfield and Pickaway County Rural Broadband Initiative Project received a $2.2 million from the U.S. Department of Agriculture to establish broadband infrastructure throughout the respective counties. The very next year, CenturyLink, Cincinnati Bell, AT&T, FairPoint Communications, and Windstream Communications accepted $58.5 million in FCC funding to offer broadband access to rural Ohio homes and businesses.

Until the region truly gains internet connectivity, students like Justin will have to continue to use the public library and administrators like Principal Hanning will continue to brainstorm ideas to give their students access to the web, something many in this day take for granted.

Statewide Computer Training Program To Begin In Athens Next Week