The Ohio Bobcat’s baseball team traveled to Columbus Tuesday to take on the Buckeyes of Ohio State in a game the Bobcats needed to win to end their four-game losing streak, and get them back to a winning record.

This was not be the game the Bobcats has hoped for.

The offensive woes continued for the Bobcats as both teams were limited to just six hits the entire game.  The Buckeyes were able to take advantage of walks and errors as they scored their first run in the bottom of the fourth on an errant throw from Ohio catcher Nick Bredeson.

“This was a lot sloppier than we’ve pitched the entire year,” Ohio Head Coach Rob Smith said. “I think we had 12 free bases; They basically scored all three runs on one hit. We got sloppy tonight, and unfortunately, it led to game-deciding runs.” 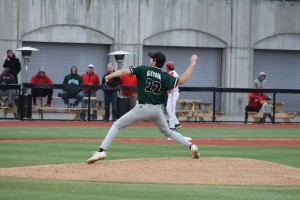 The one hit that scored the only other runs for the Buckeyes came in the bottom of the seventh inning when Ohio State catcher Jacob Barnwell hit a single to center field with the bases loaded to bring two Ohio State baserunners to home plate, giving the Buckeyes a 3-0 lead late.

The Bobcats were able to get a decent number of runners on base, but they were unable to take advantage as just two Ohio players that reached second base the entire game.

“We hit some balls hard the whole night,” Coach Smith said. “It wasn’t like it was a complete awful night at the plate, but like it’s been all year, it just didn’t equate to any runs, and that’s what we have to get better at.” 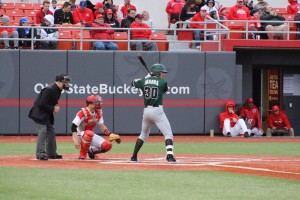 It was the same performance at the plate as it has been all year for right-fielder Spencer Ibarra, who went 3-4 with three singles including a bunt for single.  Ibarra has kept his bat hot almost the entire season and is showing no signs of slowing down.

Shortstop Tyler Finkler said he agrees that if the Bobcats want to get back to their winning ways, they need to step forward offensively.

“We just need to do a better job at piecing together hits so we can get some runs on the board and get some wins,” he said.

The Bobcats are hoping to sweep a three-game series at Ball State this weekend in MAC Conference play.

“We’ve got conference coming up this weekend, so hopefully we can hit the reset button and start from scratch and get it going,” Coach Smith said.

With this loss the Bobcats fall under .500 for the first time this season with a record of 11-12.