It’s almost been a year since eight members of the Rhoden family were shot in Pike County.  On April 22, 2016, four different crime scenes were discovered in a day that has been described as sending a “shock wave” through the rural southcentral Ohio community.

Thursday morning, Attorney General Mike DeWine and Sheriff Charles Reader held a press conference to update the status of the investigation and ask for help. Sheriff Reader was visibly emotional as he recalled the murders, “Kids…dads… moms… grandparents… taken away way too early in a way none of you could ever imagine.  My thoughts and prayers are always with them… I think about this every morning and it’s the last thing I think about every night.” 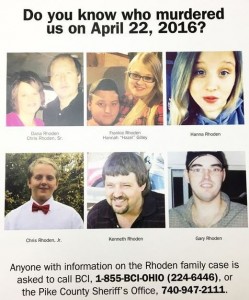 According to Attorney General Mike DeWine, the Bureau of Criminal Investigation has netted 883 tips, conducted 465 interviews (some people were interviewed multiple times), and issued 38 search warrants adding, “In the history of Ohio’s BCI this is the biggest investigation that has ever occurred. We still have, on any given week, 10-12 people in Pike County working this case.”

While they say they have made “significant” progress and can’t reveal details, authorities did say they believe there was more than one killer.

DeWine likened the case to a complicated puzzle, with some pieces in place but the picture’s still not clear. However, he added this case has opened the state’s eyes to the criminal activity in that area,  “We know a lot more about what’s been going on in Pike County for decades.”

Authorities also believe there are people in Pike County who know what happened but are afraid to come forward – possibly because of the illegal drug activity that may have been involved. Investigators say a commercial-level marijuana grow operation was found at one of the crime scenes. DeWine says they are focused on the homicides and people should talk to authorities no matter what.

On top of the $10,000 Crime Stoppers reward, there is now a billboard with the victims faces asking, “Do you know who murdered us?” Sheriff Reader says that question haunts him and his staff daily – but they are dedicated to solving this case, ” I got a message for the killers…  You came in like thieves in the night and took 8 lives – some being children in the most horrific way I’ve ever seen in my 20+ years . We are getting closer. We will find you.  The family and victims will have justice one day.”