September 15-17 will mark the 19th annual Ohio Pawpaw Festival on the banks of Lake Snowden – an event that has come to be characterized by community, eclectic pawpaw dishes, local food and art, and lots of live music.

“Last year went pretty well, even though we did get some rain,” said organizer and festival co-founder Chris Chmiel. “The main issue with last year was the fact that we didn’t have a good paw paw season at all – this year things are looking to be just about perfectly on track.”

Chmiel said that the festival has grown considerably since his initial involvement with it almost two decades ago in the village of Albany. For years, the festival has been taking place at Lake Snowden, a partnership that Chmiel has been quite mutualistic in nature.

“The festival really does bring dollars into the community – every year Lake Snowden sells out, and people come from all over to see this festival. We’ve had people come from Russia, from China; there is a professor who is studying pawpaws in Romania – he won’t be able to make it to the festival this year, but that just shows that while the rest of the world appreciates pawpaws, we’re blessed with them right here in Southeastern Ohio, but we don’t always appreciate them,” said Chmiel. “We are really blessed with superior pawpaw genetics, and they are native to this region.”

This year the Pawpaw Festival will play host to the Raccoon Creek Slalom, a result of the Raccoon Creek Partnership sponsoring a canoe and kayak slalom at Lake Snowden on Saturday, September 16 at 1 p.m. The Slalom is a buoy race course, and both canoes and kayaks (as well as life jackets) will be provided.

Music is always a big part of the festival, and this year is no different. Check out the schedule below. 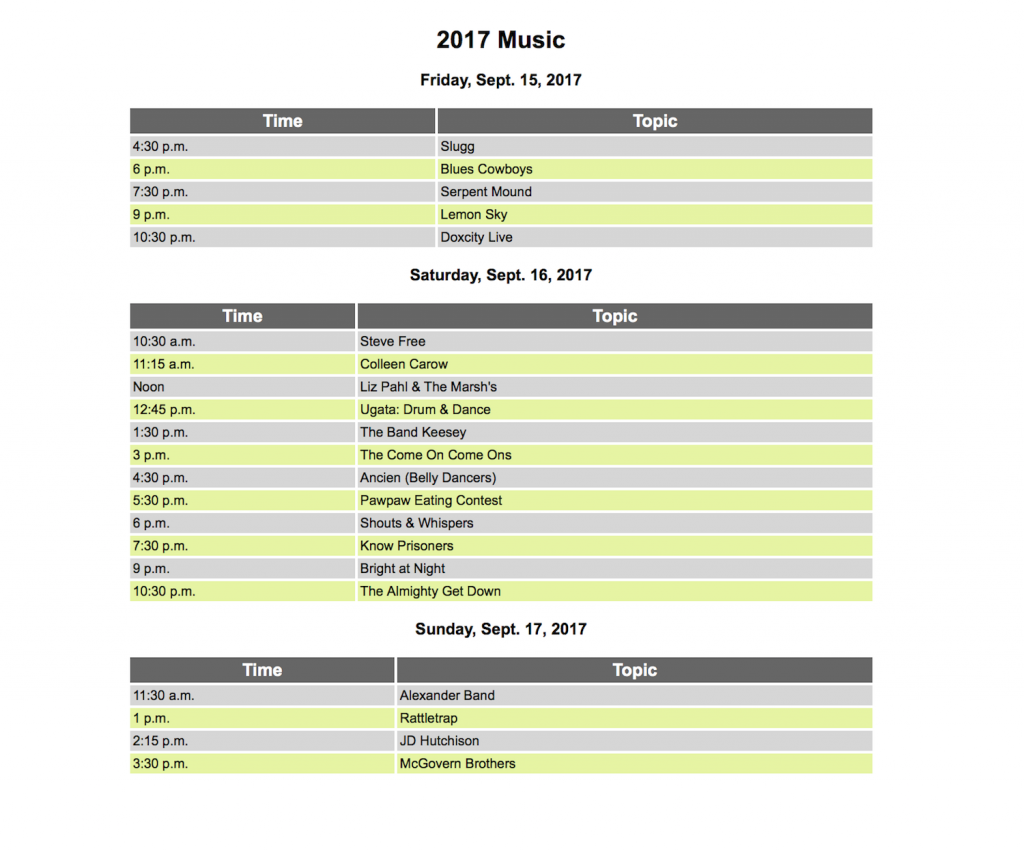 “You know, I think that we have a pretty good track record with people have a good time at the festival. I think that we have a nice mix of activities, and it’s a really nice, family friendly event – we have beer, we have music, we have a little bit of something for everybody,” said Chmiel. “We have a strong theme of supporting the local businesses that are involved, as well as local artists and musicians. I think that we do a really good job of sticking to the pawpaw theme, too, and not every food festival does that. We always go that extra mile to maintain our authenticity.”

Pawpaw Festival Going Back To The Dogs