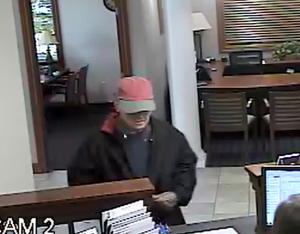 Athens Police are searching for a bank robbery suspect.

According to investigators, the suspect entered the Citizens Bank on Stimson Avenue around 11:15 a.m. Thursday morning.

Police say the suspect jumped the counter and threatened employees with a handgun. The suspect ran away with an undetermined amount of money.

The suspect is believed to be a white male and was wearing a red or pink hat and what appeared to be a skin tight light tan mask with dark glasses and a dark colored jacket with a red color. He appears to also have on gloves with some sort of design on the back of the hand.

Athens Police are investigating a report of a bank robbery at the Citizen’s bank on Stimson Avenue.

According to an alert sent out by police the suspect is described as wearing a mask, pink ball cap, sunglasses and a dark blue jacket.

He’s 5 feet 6 inches tall with the back of his head shaved, and was caring a zipper bank bag. He may have gotten into a dark colored sedan.

Police say he’s armed and ask anyone who sees the suspect to call 911.

We will update this story as more information becomes available.