Talks on renegotiating NAFTA, the North American Free Trade Agreement, are set for later this month and farm country is concerned about the potential fallout from a trade dispute. Pork producers are especially nervous about the implications of a threat from President Trump to place a 20 percent tariff on Mexican food imports.

“Mexico is one of the largest markets for pork from the United States,” said Jimmy Tosh, owner of Tosh Farms, the 24th largest pork production company in the country. “I think if Mexico doesn’t get favorable treatment we may have a 20 percent tariff imposed on our pork going to Mexico.”

Tosh has some 80 contract hog farms in Kentucky and Tennessee producing more than 600,000 market hogs each year, and he says free trade has been an essential ingredient for success.

“We have a competitive advantage because Mexico is right across the border for us and they are a large purchaser for all our agricultural products,” Tosh said.

Pork producers like Tosh fear Mexican retaliation could upend an industry built on free trade, and industry leaders and agriculture experts warn the effects could be widespread.

Tosh’s farmers enter into the industry with a 10 to 12 year commitment and build barns and allocate land for the operation. Tosh supplies the hogs and feed.

“There has been quite a bit of increase in pig production,” he said, with record production this year. “We have two new slaughter plants coming online that we hope will absorb the production, but the world market is very, very critical to the U.S. pork industry.”

The Ohio Valley region has roughly 5,000 hog farmers contributing more than $900 million in product value.  Most of those are in Kentucky and Ohio, which rank among the top 30 hog-producing states. West Virginia has a little more than 700 hog farms.

International Food Policy Research Institute Senior Fellow Joe Glauber worries about broader damage to the agriculture sector if the NAFTA talks break down and Mexico retaliates. Glauber was chief economist for the U.S. Department of Agriculture and was involved in negotiations when NAFTA was implemented 23 years ago.

“If you think back in the mid 90s we were doing, between Mexico and Canada, about $10 billion worth of trade,” Glauber said. “It’s now over four times that. It’s important for a number of commodities.” 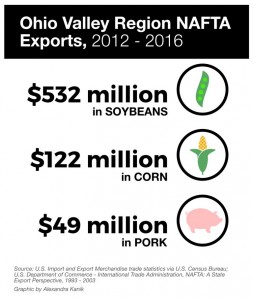 NAFTA’s  first 5 years brought a 130 percent increase in pork exports, which also boosted sales of yellow corn, which is used for or hog feed, another important crop in the Ohio Valley.

Glauber said cross border supply chains are also at risk. At the same time, Glauber said, there are some elements of NAFTA which should be reviewed. “These are old agreements,” he said, and language dealing with dispute settlements and regulations may need updates.

Jim Monroe is Senior Communications Director with the National Pork Producers Council, which has been trying to estimate the potential hit the industry could take. He said that losing the current zero percent tariff-based status under NAFTA could result in a $1.5 billion loss for U.S. pork and could affect 17,000 jobs in pork production.

“So obviously a catastrophic impact on the industry,” Monroe said. “And that’s why the renegotiation that’s taking place right now is so critical.” 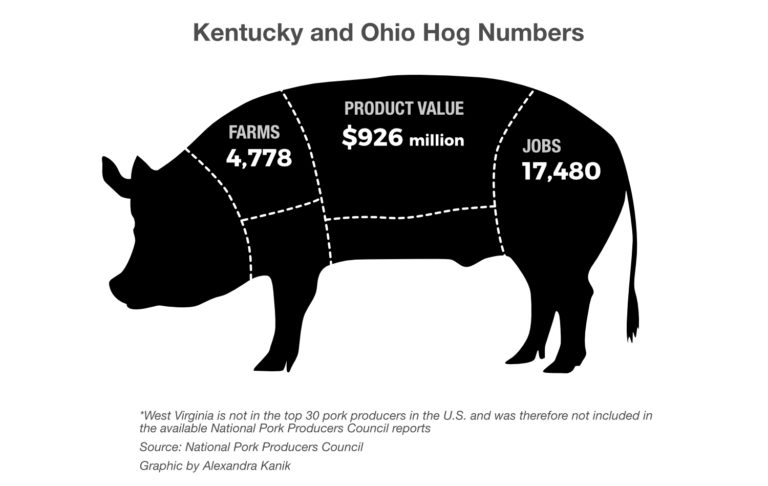 Hog farmer Jimmy Tosh worries that those losses could become long-term if global competitors such as Brazil take advantage of the market opportunity created should the U.S. lose its NAFTA advantage.

“Let’s hope it’s smoke in mirrors, but it is very concerning,” he said, adding that it’s not the only trade dispute on his radar. “There has also been threats to cancel the Korean free trade agreement too, and they take about 2 percent of our pork,” Tosh said.

Reuters reported during an August interview with President Trump that he will “either renegotiate or terminate” what he called a “horrible” free trade deal with South Korea.

NAFTA talks resume in Ottowa on September 23rd. A new deal is possible by the end of the year.

Farmers Fond of Trump But Growing Nervous About Trade

“The Producers” To Premiere During Lancaster Festival