Columbus-based poet Ruth Awad first fell in love with a dog when she took on ownership of Pete as a young adult, having moved out of her parent’s home.

“We usually had cats when I was growing up, and when I left for college, I got my first dog. I always felt like I really deeply loved my cats, but with dogs it was an entirely different experience,” the Lebanese-American poet said in an interview with WOUB in early September 2017. “I never knew you could feel so bonded with an animal.”

Animals, and pets in particular, are a primary focus for the writer, who works as a blog editor at Agape Editions. She graduated  from the Ohio State University with a bachelor’s in English, focusing on creative writing, and with an MFA in poetry from Southern Illinois University Carbondale. She now regularly conducts an interview series called “Pet Poetics,” which examines the way in which the pets we have affect the art we create.

“My dogs keep me tethered to the real world. When I’m writing, and working on heavy subject matter, it is so nice to be able to just look away for a little bit and pet your dog, just be in the moment with them – it helps you feel like you can come back from the place you are writing from,” she said. “There’s something magical about dogs, and I don’t mean to single them out particularly, I know that people can form strong bonds with all types of animals, but dogs in particular are a force field of love and understanding. They don’t care if you write bad metaphors.”

Awad’s first book of poetry, Set to Music a Wildfire, was published earlier this month by Southern Indiana Review Press. Last year it was the recipient of the Michael Waters Poetry Prize. 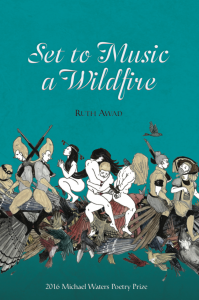 “The book started as my thesis – I graduated in 2012, and it was a long process. For a couple of years of grad school, I just didn’t know what to write about – but I did know what I didn’t want to write about, which is what “Set to Music a Wildfire” is about: my family history,” she said. “I wrote the first draft of it in 2012, and I’ve been working on it since, slowly revising it, until it was picked up by Southern Indiana Review Press last year.”

The book follows the story of Awad’s father during the enormous strife of the Lebanese Civil War. It also documents his immigration to the United States and the family he raised in a country that was entirely new to him.

“I took on this project because I wanted to understand the size of my history. I was born in America, and I feel like my father tried very hard to assimilate. When he got here, he changed his name, he learned the language, he lost some of the traditions that would have been more of a part of his day-to-day life (in Lebanon),” said Awad. “I wanted to understand where I came from.”

Awad said that she had always been interested in writing, even as a child. Her interest in poetry, in particular, was forever piqued when her mother gave her a copy of Sylvia Plath’s Ariel collection, which was Plath’s second volume of poetry to be published, coming to the shelves some two years after her suicide.

“I remember reading that collection and feeling something sparking inside me. I felt like I understood something about myself a little better, and at that age I didn’t know what that was, but I knew I wanted to be doing what Sylvia Plath had been doing. I wanted to express myself and write something beautiful like she had,” said Awad.

While her first project focused on the viewpoints of people from her family’s history, Awad said that her second will take a closer look at her personal identity.