Sunday, October 29 from 6 p.m. to 9 p.m. the pipes of the great organ will sing out at the Southeast Ohio History Center!

Renowned professional organist Dennis James will provide the sound backdrop to the  1925 silent film version of Phantom of the Opera. Hearing the live pipe organ singing out the melodies of The Phantom will send chills down your spine and engage you with sheer delight!

The Southeast Ohio History Center’s Great Hall will take on the characteristics of a 1920s movie palace in a tribute to Hollywood silent films in the presentation of the Phantom of the Opera. Starring the incomparable master of the macabre, Lon Chaney, and featuring a cast of 50 principal players and over 500 extras, the film will be presented exactly as it was originally seen in its initial release – with its original 1925 issued accompanying musical score performed in solo organ transcription from the symphony orchestra score.

Theatre organist, Dennis James is playing a vital role in the international revival of silent films with live accompaniment. He will perform the now restored original film score by M. Winkler and G. Heinrich published to be performed as accompaniment to this Hollywood horror classic. James obtained a rare surviving complete copy of the score from Vi Eggars, a veteran silent film organist active in Philadelphia, who had retained it in her private collection following the performances during the film’s release in 1925.  Included with the score were the extensive production performance notes indicating unusual staging effects to accompany the presentation, some of which will be recreated at the History Center’s screening.

Tickets are $30 for non-members, $24 for SEOHC members. TICKETS ARE AVAILABLE NOW! This is a limited seating event so get your tickets before they sell out!

This is the perfect event for celebration of Halloween- so wear your costumes- or better yet, your finest Opera attire! (Costumes completely optional) 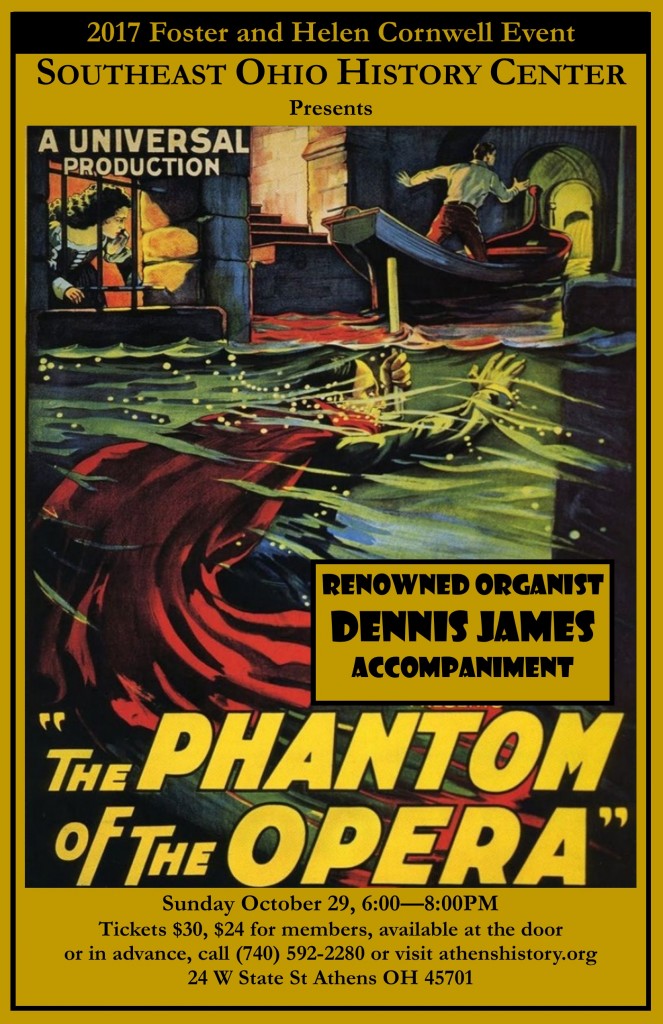 Stuart’s Opera House Hosts a Night With the Legends