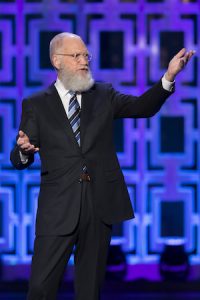 “This is an exciting honor,” said David Letterman upon learning he is to receive the nation’s top prize for comedy and humor. “For 33 years, there was no better guest, no greater friend of the show, than Mark Twain. The guy could really tell a story.”

David Letterman has been hailed as one of the most innovative and influential broadcasters in the history of television. In 33 years on late-night television, Letterman hosted 6,028 episodes of Late Night (NBC) and The Late Show (CBS), surpassing his mentor, Johnny Carson, for the longest-running late-night broadcaster in American history. As a writer, producer and performer, Letterman is one of the most-nominated people in Emmy Award history, with 52 nominations, resulting in 10 wins. Letterman is also a Peabody-Award winner and a Kennedy Center Honoree.

Born and raised in Indianapolis, Indiana, Letterman’s first network break came as a writer, in 1978 on the CBS variety series Mary, starring Mary Tyler Moore. In November of that year, he made the first of his 22 appearances on The Tonight Show Starring Johnny Carson. He also guest-hosted Tonight numerous times. In 1980, Letterman began hosting a morning comedy-variety program, The David Letterman Show, which ran for three months on NBC. His ground-breaking show Late Night with David Letterman premiered in February 1982. Throughout its 11 years, Late Night changed the complexion of late night television, earning five Emmys and 35 Emmy nominations. On Aug. 30, 1993, the Late Show with David Letterman made its debut on CBS, establishing itself as the first successful comedy/variety show in late night, outside of NBC. In its 22 years at CBS, Late Show became known as one of the most inventive and imaginative comedy programs in television, and launched the careers of countless comedians and musical acts. 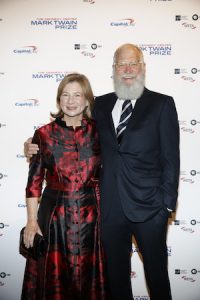 From his roots in comedy, Letterman also became renowned as a masterful interviewer, sharing the stage with the U.S. Presidents, Cabinet officials, Medal of Honor recipients, and virtually every Presidential candidate for more than 20 years. Through his guest interviews, Letterman also brought to light important global issues such as world hunger and climate change.
Letterman announced his departure from Late Show in 2014, and aired his final episode on May 20th, 2015 to an audience of 13.76 million people. David Letterman is 70, and resides in New York with his wife Regina, and twelve-year-old son Harry.

Corporate funding for David Letterman: The Kennedy Center Mark Twain Prize is provided by Capital One and Comcast/NBCUniversal. Major funding is provided by the Corporation for Public Broadcasting, PBS and public television viewers. Air travel is generously provided by American Airlines. 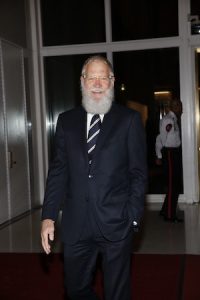 The Kennedy Center Mark Twain Prize for American Humor was created in 1998 by The John F. Kennedy Center for the Performing Arts, Mark Krantz, Peter Kaminsky, Bob Kaminsky and Cappy McGarr to recognize the art of humorists who have had an impact on American society in ways similar to the distinguished 19th century novelist and essayist best known as Mark Twain*. As a social commentator, satirist and creator of characters, Samuel Clemens was a fearless observer of society, who startled many while delighting and informing many more with his uncompromising perspective of social injustice and personal folly. He revealed the great truth of humor when he said, “Against the assault of laughter nothing can stand.” David Letterman will be presented a copy of an 1884 bronze portrait bust of Mark Twain, sculpted by Karl Gerhardt (1853-1940). The bust and its images are courtesy of the Mark Twain House, Hartford, Connecticut.

Comedy at the Kennedy Center, funded through a $5 million gift from Capital One, builds on the Center’s dedication to elevate comedy as an art form and uniting the community through laughter through events such as the Mark Twain Prize for American Humor,

WETA Washington, D.C., is one of the largest-producing stations of new content for public television in the United States and serves Virginia, Maryland and the District of Columbia with educational initiatives and with high-quality programming on four digital television channels. WETA productions and co-productions include PBS NewsHour, Washington Week, The Kennedy Center Mark Twain Prize, The Library of Congress Gershwin Prize, performance specials from the White House and the U.S. Capitol and documentaries by filmmaker Ken Burns, including The Roosevelts: An Intimate History, Jackie Robinson and the upcoming The Viet Nam War. Sharon Percy Rockefeller is president and CEO. More information on WETA and its programs and services is available at www.weta.org.