“We’re here with Mr. and Mrs. Gates from the Gates Foundation,” the students said.

The world’s richest man and his partner in life and philanthropy, Melinda Gates, had dropped in for a chat.

The students had questions, some just for fun.

The big question, of course, was why this high-tech power couple had come to Betsy Layne High. You might expect that the Gateses had come to see coal country’s problems, or to explore what could be done about the failings of small-town schools.

No. They were there to see how other schools could achieve what Betsy Layne has.

Bill Gates praised the interactive classroom and enthusiastic teachers. He also noted that Floyd County has achieved a graduation rate well above the national average in a state that has long lagged behind.

“If I could pick up Betsy Layne and make every high school in the nation do what’s happening here,” Melinda Gates said, more schools would be meeting their goals.

And the Gateses aren’t the only tech billionaires-turned-education donors who have visited eastern Kentucky schools. Facebook founder Mark Zuckerberg visited a school laboratory in Hazard in September.

Zuckerberg and Gates are attracted by the progress and promise they see in the schools participating in a collective effort called the Kentucky Valley Educational Cooperative, KVEC for short.

The 22 school districts in the cooperative serve some of the most rural, rugged country in Appalachia, towns and counties struggling with some of the country’s most profound economic and public health problems. But by working together, these schools found ways to innovate in classrooms, connect people with health care, and maybe help the region find a new path forward.

Hawkins joined KVEC 15 years ago and is now the executive director. The cooperative started with humble goals around 1970, he explained, as a way to provide driver’s education courses and purchase school supplies in bulk.

But over time the cooperative expanded to teacher training and a wholesale reinvention of the classroom experience. KVEC schools emphasize personalized learning, team projects, and an entrepreneurial attitude that Hawkins thinks can make a difference in a region in need of change.

“What we believe is that our K-through-12 classes can serve as catalytic drivers to reinvent communities where we live.”

Dessie Bowling is the associate director for KVEC, but before she took that role, she was a teacher for 28 years. Bowling said there’s one excuse that she heard a lot from students.

“I would have kids say that they didn’t need to get an education because they could go into the coal mines and make more money than what I was making,” she said.

Bowling said that’s not something she hears much anymore. Coal jobs aren’t nearly as plentiful as they once were. Many students come from generations of coal miners, and now that those good-paying jobs are harder to find, there’s been a big impact on the community’s sense of what’s possible.

Bowling said she sees people losing hope. That’s something the cooperative wants to push back against, and in the last few years, they’ve had money to make a big effort.

“Our funding from the Race to the Top grant has enabled us to showcase that there are opportunities out there,” Bowling explained.

In 2013 the U.S. Department of Education awarded a $30 million federal grant to support the cooperative’s personalized education and career readiness work. A large part of the grant has funded specific programs created by teachers and students in the cooperative’s schools. Students across eastern Kentucky have been inventing new products, building and racing drones, coding software, and whole lot more.

In one hands-on technology classroom at Belfry High School in Pike County, students said the opportunities that KVEC has opened to them has made them feel empowered to define their own future.

“People would be surprised by this from what their stereotype for people around here is,” said freshman Jacob Bowman. “Literally, we’re proving their stereotypes wrong.”

Stereotypes and a slow economy are not the only challenges that students in eastern Kentucky face. They’re also up against some extraordinary health issues. Many of the counties KVEC serves have some of the nation’s highest rates of chronic disease, such as diabetes, and unhealthy conditions including childhood obesity. More recently, the rampant opioid crisis added to disruption in communities and families and put the area at high risk of needle borne disease.

Children don’t learn well if they are sick or can’t concentrate because of turmoil at home. The cooperative has found that it must address health problems in and out of school. 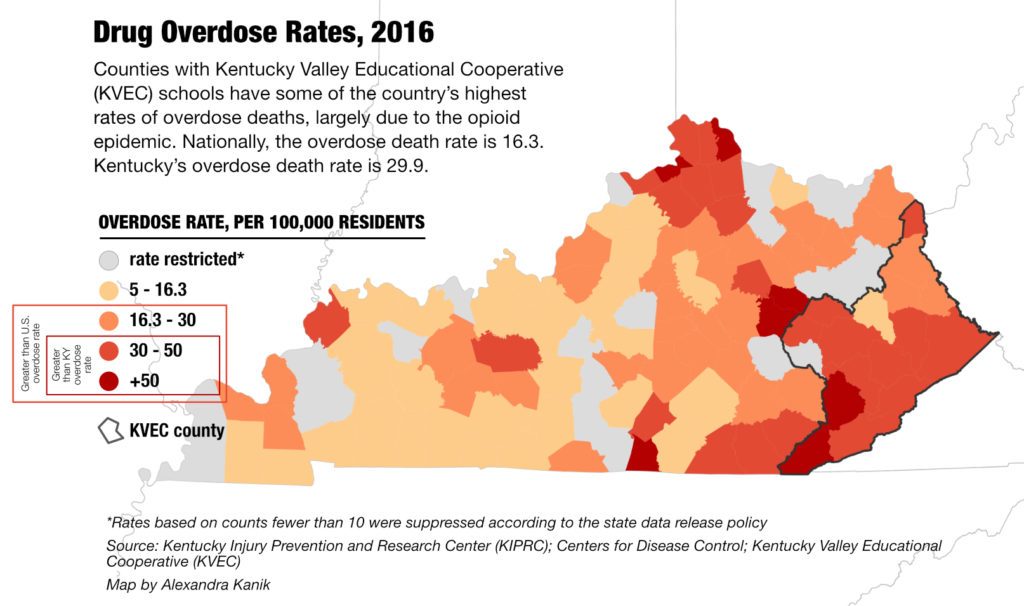 Sandy Hogg leads KVEC’s health programs. Like Dessie Bowling, Hogg has been working in the area’s schools for decades. She knows that to teach the kids, you have to help them stay healthy and focused. The goal, Hogg said, is treating the whole child.

But even the mountains people here love can complicate access to basic health care.

“Well, the biggest problem that we have is the terrain that we live in,” she said. “What we see is that children just couldn’t get to the doctor like they should.”

Many families in the cooperative districts also lack a reliable means of transportation. Hogg recalled a night clinic that had to be halted because of safety concerns. A family of five, two adults and three children, drove to the clinic on a single four-wheel All-Terrain Vehicle.

Public transportation is rare and for struggling families the cost of a tank of gas can be out of reach.

“They can’t, they just don’t have that money,” Hogg said.

Hogg said the cooperative focuses on bringing health care to students and staff, not the other way around. Mountain Comprehensive Care, a local federally-funded health care provider,  worked with KVEC to start health clinics in Letcher County schools. That has served as the model: Local health departments provide staff and school districts provide space.

Teachers can use the clinics during their planning periods. KVEC serves about 40,000 kids and about 2,000 staff.  And those clinics have evolved beyond what Hogg said she could have imagined. Letcher County Central is a good example, she said.

“We have curtains, we have three bays there for those kids, it looks like you are going through an emergency room, it’s beautiful,” she said.

Tele-health is also available in eight districts, she said. With tele-health, a nurse practitioner or a doctor serves several schools from a remote location. A trained staff member at the school performs the routine physical checks, like taking temperatures. The health care provider uses a digital connection to diagnose the patient, recommend treatment, and send prescriptions to a local pharmacy.

Reliable internet can sometimes be a problem, Hogg said.

“If you live in the mountains you are going to have trouble with the internet,” she said with a laugh. She went to one school where students were all sitting on a staircase with their tablets. It was the only spot in the building where they could connect.

But so far, cooperation among the districts and support from the community health organizations  have bolstered the health outreach.

Now the main challenge comes from the ravages of the opioid epidemic spilling over into the classroom.

“In some of our districts 50 percent — and this is astounding — of our children are being raised by their grandparent or someone other than their parents,” she said. “We have a terrible problem with opioid abuse. We have to find a solution.”

Chuck Fluharty directs the Rural Policy Research Institute at the University of Iowa where he has worked with communities dealing with economic change, from Missouri farms to Minnesota’s iron ore range. Fluharty said eastern Kentucky’s situation is among the toughest.

“This is occurring in one of the most challenged regions in our nation,” he said.

The coal industry’s collapse in the face of a rapidly changing energy market pulled the economic rug from under a region that had long depended on a single extractive industry.

“It’s called the resource curse in economics,” Fluharty said. “When you have a company town, what tends to happen over time is you crowd out the potential of other industry to make a case for their future.”

Jobs in the mines and businesses supporting them took up most of the labor supply and capital, and little effort went into diversifying the economy or training the workforce for anything else.

In most regions that rely on resource extraction, Fluharty said, change comes gradually as an industry lessens over time and decision makers look at other options.

“In Kentucky this hit almost all at once,” he said.

That didn’t just bring a loss of jobs. The larger risk is a community-wide loss of hope.

Consider just a few statistics. The region has some of the country’s highest overdose death rates, leading a sharp surge in what health experts call diseases of despair. In some of the counties the KVEC school systems serve, life expectancy is years shorter than the national average. People in Bangladesh can expect longer lives than people in Breathitt County, Kentucky.

But Fluharty, who has worked with KVEC, is optimistic.

“It is actually a revolution in how schools in that region view their role,” he said. “It’s about building total human and social capital, recognizing that the schools are at the center.”

Over the coming months this series will explore how the KVEC cooperative can help Appalachia’s coal country change course.