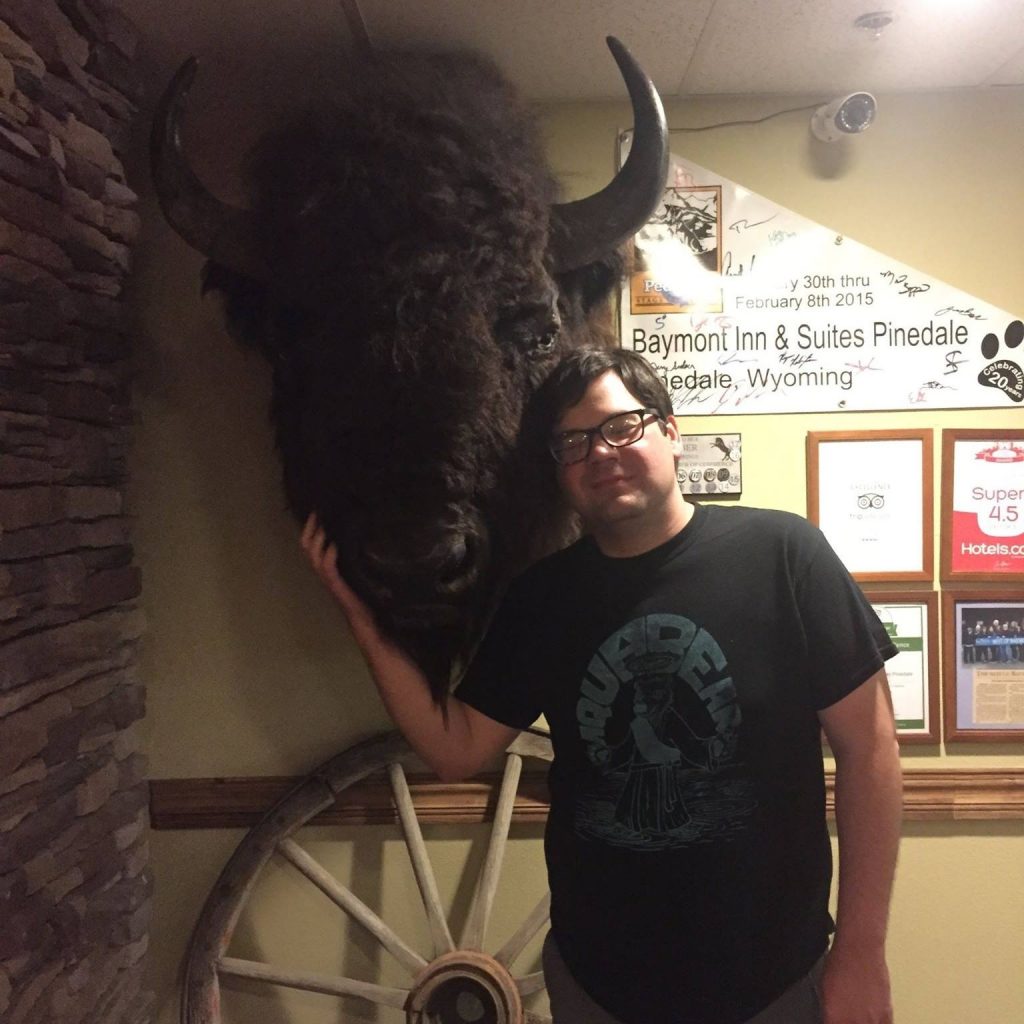 Brian Koscho lives in Athens with his wife Sherri, their cat Maggie and dog, Bosco. Brian has worked at Stuart’s Opera House and the Nelsonville Music Festival since 2007 and has helped operate the Ohio music collective Aquabear Legion since 2004. 2017 saw Aquabear put out its 12th release, the double LP compilation “Aquabear Legion Volume 6,” featuring 23 Ohio bands, you can buy it at aquabearlegion.com. He plays bass and makes noise in Athens band Unmonumental, and hosts a couple podcasts on aquabearlegion.com including one all about Ohio music called “The Western Reserve.” In his spare time enjoys being constantly disappointed in the Cleveland Browns, even more so this year than last year, which he didn’t think was possible.
—————————————————————————————————
I honestly think my albums of the year are Grateful Dead’s Anthem of the Sun and The Kinks’ Arthur, but I try to keep these things current year to year, so the following all actually came out in 2017. And honorable mention to my own (cough cough plug plug) vinyl collection Aquabear Legion Volume 6 too.
So here it goes in no particular order…
Big Thief / Capacity
Beautiful record from one of my new favorite bands, they killed it at the Nelsonville Music Festival this year and their 2016 album Masterpiece might even be better than this one. These songs all have an instant familiarity and still I find myself hearing new things with each listen, listen to Capacity and Masterpiece and you’ll see what I mean.
Favorite Song: “Objects”
Joan Shelley / Joan Shelley
Joan might have my favorite voice among current musicians, and her self titled album features some amazing production from Wilco’s Jeff Tweedy and the jaw dropping guitar wizardry of Nathan Salsburg. And as if that wasn’t enough, the songs themselves are great too.
Favorite Song: “If The Storms Never Came”
Kendrick Lamar / DAMN.  Kendrick just gets better and better, this album is not only worth the hype, I think it goes past that. Came out at the beginning of the year and still sounds as fresh at the end. Every minute of this album pushes into new territory, Lamar is clearly the best rapper in the game right now and DAMN. keeps that bar just as high as it was after the near perfect To Pimp A Butterfly
Favorite Song: “YAH.”
Endless Boogie / Vibe Killer
Rock ‘n’ roll is alive and well with the Paul Major led longform jam vets Endless Boogie, and their live show is spectacular still. And one of the most aptly named bands around to boot. Saw these guys at Ace of Cups and was floored with an hour of non-stop solos and a wall of rock and roll. Damn right.
Favorite Song: “Back in ‘74”
Pere Ubu / 20 Years in a Montana Missile Silo
Pere Ubu is post art-rock royalty from Cleveland, Ohio and they’ve been stretching the boundaries of music longer than I’ve been on this planet. It shouldn’t be surprising that they continue to do so, and their live tour this year featured one very tight and experimental band. Glad I had a chance to catch them at Mountain Stage!
Favorite Song: “Prison of the Senses”
Kamasi Washington / Harmony of Difference
Kamasi Washington is a master audio storyteller, his previous full length (the appropriately named Epic) brought a fresh perspective to jazz and Harmony of Difference continues that process. Each track building on the last and exploring a sonic territory rich in a variety of influences, I can’t wait to listen to where he goes from here.
Favorite Track: “Perspective”
Day Creeper / Mirror to the Fire
Another incredibly solid album of rock and roll from Columbus, Ohio’s Day Creeper. I’ve loved everything the group has done so far and their live shows are fantastic too. More solid songs from these folks all the way through. Check out Central States (their last album) too. Superdreamer Records and Heel Turn Records teamed up for this one too, and they are both deserving of you buying other records from them.
Favorite Track: “Unfufilled”
Spiral Stairs / Doris and the Daggers
This was a late in the year surprise for me, I missed its release earlier. I am a HUGE Pavement fan, and was always a fan of those Spiral Stairs songs and his guitar playing. But this solo release came at the suggestion of my friend Dan. Stoned out indie dad rock with some nice arrangements and earworms throughout, each time I listen to this one I like it more and more.
Favorite Track: “AWM”
Supernobody / Reliquery
Listen to me. Athens, Ohio’s Supernobody is the best rock ‘n’ roll band there is. I’m totally serious. I tell people this all the time if they ask. This just came out last week on YouTube out of nowhere. It’s really, really good. And Matt Box even sings one this time around!
Favorite Track: “Oh Yeah Records”
Vince Staples / Big Fish Theory
Another emcee that continues to push the boundaries of hip-hop, I’ve been a big fan of Staples for a few years now (his Summertime ‘06 album is also highly recommended) and was excited that this release got stuck in my head as much as the previous ones.
Favorite Song: “Yeah Right”
I also really liked these:
Slowdive / Slowdive
Neil Young / Hitchhiker
Kevin Morby / City Music
The Black Angels / Death Song
Diet Cig / Swear I’m Good at This
WV White / House of Spiritual Athletes
Counterfeit Madison / Opposable Thumbs
Tinariwen / Elwan
Twain / Rare Feeling
Hiss Golden Messenger / Hallelujah Anyhow
Top Tunes '17

Brian Koscho: My Top Albums of ’15