NPR member stations are uniquely tapped into local music scenes around the country. DJs share up-and-coming bands with listeners by playing their music on the radio, interviewing them on-air and writing articles and blog posts.

But most of that content rarely travels outside of the station’s city, and a listener in Philadelphia might not know what new music a Chicago-based DJ has just discovered. 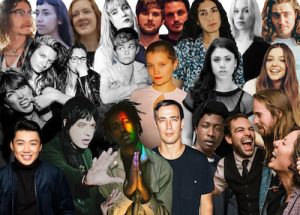 In the fall of 2017, NPR Music and VuHaus’ public radio network kicked off Slingshot, a collective effort among taste-making music stations to elevate exceptional emerging artists.

In 2018, each music member station selected one Slingshot artist in January and will add more to the list throughout the year. Some, like WebsterX (nominated by Radio Milwaukee) or Haley Heynderickx (nominated by opbmusic), are important players in a station’s local music scene. Others, like Jade Bird (nominated by KXT), are rising stars from abroad.

The Slingshot 2018 aggregation page on npr.org published on Tuesday, January 9, and each month, three new artists will be added to the site, from February to November 2018, building up to a list of 50 new artists we discovered throughout the year.