The Force Premieres on Independent Lens
Monday, January 22, 2018 on PBS

Inside Look at Oakland’s Embattled Police Department, Struggling to
Rebuild Trust in One of America’s Most Violence-Plagued Cities

At a powder keg moment in American policing, The Force presents a mesmerizing cinema vérité look deep inside the long-troubled Oakland Police Department as it struggles to confront federal demands for reform, a popular uprising following events in Ferguson, Missouri, and an explosive sex scandal. Produced and directed by Peter Nicks, The Force premieres on Independent Lens Monday, January 22, 9:00-10:30 PM on PBS. 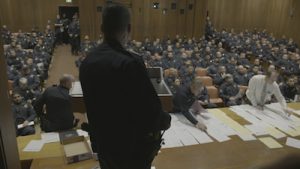 Winner of the Documentary Directing Award at the 2017 Sundance Film Festival, filmmaker Nicks embedded with the department over the course of two years to follow OPD’s serial efforts to recast itself. The film spotlights the new chief, hailed as a reformer, who is brought in to affect reform at the very moment the Black Lives Matter movement emerges to demand police accountability and racial justice both in Oakland and across the nation.

The film also follows the journey of young cops in the Academy who are learning how to police in a new era of transparency and accountability. Out on the street, the camera gets up close as rookie and veteran officers alike face an increasingly hostile public where dueling narratives surround each use of force. Under scrutiny as never before, these officers respond to a constant flood of 911 calls, and the film reveals the wide gulf between how cops see themselves and how they are seen by the public. 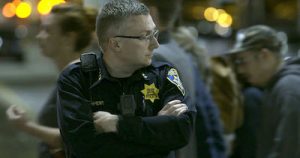 Despite growing public distrust, the OPD begins garnering national attention as a model of police reform. But just as the department is on the verge of a breakthrough, the man charged with turning the department around faces the greatest challenge of his career when a scandal breaks out about police officers having sex with a minor — threatening not only the progress that has been made, but the very authority of the institution itself.

“When we funded Pete’s previous film The Waiting Room, we encouraged his plan to make a series of films about public institutions,” said Lois Vossen, Independent Lens Executive Producer. “Independent Lens provided R&D funding for The Force so he could gain the remarkable access that allowed him to immerse himself — and audiences — inside the OPD. We knew the film would yield exceptional stories but none of us could have anticipated that the Black Lives Matter movement would explode mid-production and the OPD sex scandal would unravel as we were about to 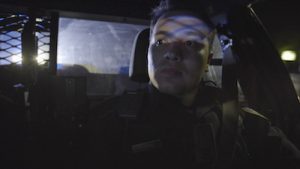 Visit The Force page on Independent Lens, which features more information about the film. The film will be available for online viewing on the site beginning January 23.

Sean Whent (Former Chief of Police, OPD) was appointed Interim Chief by Mayor Jean Quan in May 2013, replacing Anthony Toribio, who served for only two days following Howard Jordan’s resignation. Whent was permanent (non-interim) police chief from May 2014 to June 2016. He spent two decades on the force, joining in 1996. He was forced to resign due to his role in the sexual-misconduct scandal involving Oakland police officers engaging in sex acts with a minor.

Officer Jonathan Cairo (Patrol Officer, OPD) was hired by the Oakland Police Department in 2013. After successfully completing the police academy and field training he was assigned to the patrol division out of the East Oakland Sub Station. After working patrol for two and a half years he was offered a position in the department’s Community Resource Office where he is currently assigned to East Oakland.

Officer Johnna Watson (Public Information Officer, OPD) has worked for the City of Oakland since 1992. In 2011, she was selected for her current assignment as Public Information Officer. She has served an unequaled five plus years in this demanding position and has been the face of the OPD through events including Occupy Oakland, the Oikos University homicides, strife at the Port of Oakland, demonstrations stemming from police actions in other parts of our country, and most recently the Ghost Ship fire tragedy. She has witnessed the growth of social media during her tenure as PIO and assisted OPD in its social media efforts.

Ben McBride (Community Liaison, OPD) is a native of San Francisco and a longtime activist for peace and justice. In late 2014, he became the primary civilian trainer for the Oakland Police Department’s Procedural Justice & Police Legitimacy Course. Though the course is facilitated nationally, McBride is the sole community participant currently providing training and consultation to police departments around its implementation.