Pothole Pain: Who Pays if Your Car is Damaged? 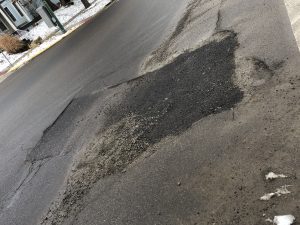 Chris Reimer turned onto East State Street on his way back to his home in Columbus when he hit a pothole big enough to damage two of his wheels.

“There was a big pothole and I tried to avoid it but there was another car on the left hand side of the road,” Reimer said. “ I avoided it the best I could and hit it with both my right side tires and ended up bending them and then my rear right tired ended up going flat so I had to replace that tire.” 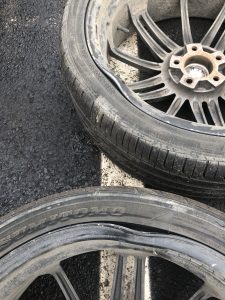 Potholes are more common in the winter because snow and ice melt on the roads, causing layers of the pavement to separate and form a hole when cars drive overtop.

Although the city is responsible for fixing and filling the holes, they are not responsible for damage to a vehicle if you hit the pothole the city doesn’t know about. Reimer hit one of those potholes.

“They said they weren’t going to fix any of the damages, the pothole was not claimed beforehand so they technically had no idea it was there,” Reimer said. “So I’m pretty much out of my money for my rims and tire.”

Reimer spent almost $1,600 to replace his rims and buy a new tire.

Andrew Stone, the public works director for the city of Athens,  says if there is proof the city knew about the pothole, had time to fix it, and did not get to it before damage was done to a vehicle, the city will pay the insurance deductible.

“If there were to be a situation like that where it was one we knew about and we just simply didn’t respond to it we could submit it to our insurance company and the insurance company would pay the deductible for the motorist,” Stone said. “Now the motorist would then obviously use their insurance to pay for the remainder of the cost.

There are at least five maintenance technicians out fixing roads every day. When a pothole is reported, technicians respond to the report by filling the pothole with a material known as Cold Patch, a temporary fix until the road can permanently be repaired in warmer weather.

To report a pothole near you, download the Athens City Source App on your smartphone, click “Submit Request” on the home screen, click “Pothole”, mark the location of the pothole, you will then be prompted to take a photo and describe the hole.

You can also report a pothole on the city’s website.

City Of Athens To Repave Streets Over Summer

Reporting Potholes in Athens May Save You Money