The Ohio Valley was once synonymous with steel. Even after the industry’s sharp decline the region is still home to many industries that produce or use steel and aluminum. Those industries are closely watching what the Trump administration will do on steel and aluminum imports.

The Department of Commerce has suggested a massive 24 percent global tariff on those imports. As a candidate, Donald Trump promised to apply tariffs. Now, it’s unclear if President Trump will follow through.

The decision carries major implications for the region where a mix of metals manufacturers and users would be among the trade winners and losers, and many other industries could be affected by the fallout that follows.

For 20 years Martin Dofka was a steelworker at Wheeling-Pittsburgh Steel in West Virginia. A Trump supporter, Dofka said foreign companies have an unfair advantage because they don’t have to comply with the regulations American companies do.

“They don’t play by the same rules, there’s no EPA or OSHA or anything else over there,” he said. “There’s no way for the American companies to, I would call it, competitively compete with them.”

Dofka isn’t against environmental or work safety regulations — he thinks they’re important. He said the sort of tariffs the Trump administration is considering would help make global trade more fair.

“I just think they should have to do the same thing,” he said. “If we’re buying their steel, if they don’t want to comply with our regulations we shouldn’t buy it at all.”

Century Aluminum, the country’s largest premium aluminum producer, cut production at its Hawesville, Kentucky, facility by more than half in 2015. Executive Vice President Jesse Gary blames subsidized imports, which forced prices down. He says if the Commerce department’s recommendations are implemented Century will be able to bring that smelter back to full capacity and bring back 350 jobs with an average pay of $90,000 a year.

“The truth about the aluminum industry is the U.S. is one of the few aluminum producing regions in the world that actually doesn’t already have tariffs on primary aluminum,” Gary said.

Gary said Kentucky is already the largest producer of aluminum in the country, and it soon could be producing more. Braidy Industries is building the first new aluminum mill in the U.S. in decades in the Ashland, Kentucky, area. Braidy CEO Craig Bouchard supports the tariff recommendations. He thinks the tariffs will mean more international companies will build smelters in the U.S., resulting in new jobs. 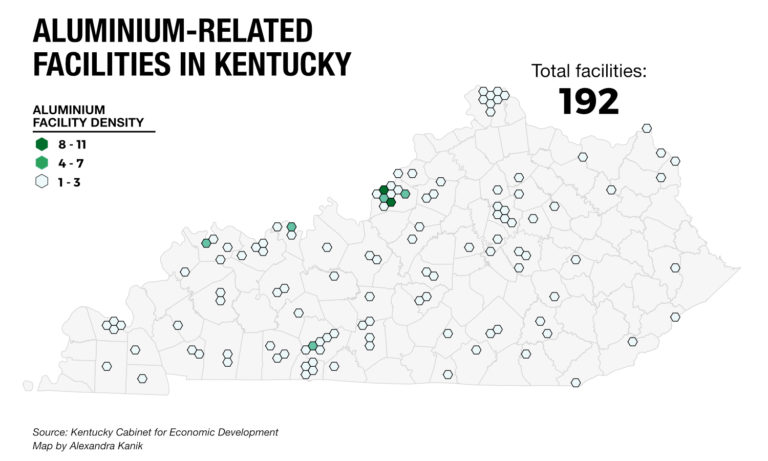 “If companies are facing tariffs as they import here and they want to continue to import here, as many of them do, they’ll consider making capital expenditures here, creating jobs and being part of our community,” Bouchard said.

Bouchard has seen how foreign competition affects both aluminum and steel. He became the president at Wheeling-Pittsburgh Steel in 2006 after a hostile takeover. He said China has often “dumped” metals into the U.S. at below-market prices, giving them an unfair advantage in the industry.

He said he would like to see the Trump administration create tariff exemptions for other countries, such as Japan and Canada, which exports the most steel to the U.S.

“I think the United States needs to favor its true friends in all these things and disfavor those that are not helpful to the country,” Bouchard said.

Kentucky taxpayers also have a lot riding on Bouchard’s current company, Braidy. The company got a $15 million investment from state government, and another $12 million in tax incentives. And as for concerns that the tariffs could trigger a trade war, Bouchard had this to say.

“Never shy of fighting a war with a good cause and always want to be a winner,” he said.

But economist Brian Strow warned that other regional industries could suffer. Strow works at Western Kentucky University and is also a Republican candidate for the Kentucky House of Representatives.

He noted that the European Union has already said it will place tariffs on bourbon from Senate Majority Leader Mitch McConnell’s state to maximize the political pain.

Aerospace industries, with major exporting companies in Kentucky and Ohio, are concerned tariffs will damage relations with client countries. And then there’s the auto industry — a major employer in the region — which Strow said needs imported steel.

“It’ll result in a net loss of U.S. jobs which is not I think what President Trump is wanting to happen but it’s the law of unintended consequences,” he said.”

Strow said only a small group of people would benefit from import tariffs but many more would lose in the trade war that would follow.

Part of the family

Bowers has first-hand experience with auto manufacturing plants closing and people losing jobs. He put in 15 years at a General Motors plant in Michigan before it closed. He said it’s hard to see a town devastated by a plant closing.

“When you work with somebody they’re part of your family, they become part of it because you spend a lot of time with them. You hate seeing them go out the door,” he said. “There’s a chance they won’t ever be called back.”

Bowers said he’s not a fan of President Trump, but he supports imposing tariffs on steel and aluminum. Like Wheeling steelworker Martin Dofka, Bowers wants to see foreign companies have to meet similar labor and environmental standards.

“I mean, you want to be competitive but there’s only one earth,” he said.

Bowers thinks America’s consuming power will help it ride out a trade war and drive more domestic production — something most economists doubt.

Those on both sides of the tariff debate will be watching eagerly for a final decision from the White House, which is due by mid-April.

Glynis Board of WVPB contributed to this story.