The Sourwood trail is a connector trail in Sells City Park off of East State Street in Athens. Although the path is well worn and tall trees create a picturesque wall around it, it is, as stated by an online directory of hiking trails, a “connector trail,” which “has no details, though it will appear on all maps.”

Although Adam Remnant didn’t name his debut solo album solely off of this little trail, one can’t help but make the connection between this rather opaque and oddly poetic disclaimer and the intentions of the album, which is entitled Sourwood. The record will be released this summer, after reaching its Kickstarter campaign goal in less than a week after its launch in late February. Sourwood eludes to a portion of life that comes with little or no forewarning minutiae, yet appears on (almost) all maps, and, most likely, will appear shorter in retrospect. Remnant construes the album as a sort of crossroads, where “dreams and realities meet.”

“Yeah, describing it like that is a little obscure, I guess,” said Remnant in an interview with WOUB about a week after his Kickstarter campaign goal had been met. “But what I was trying to get at was this general idea about being in the thick of adulthood, where I’m at right now. I’m raising kids and working and trying to juggle all these facets of life, and in the midst of all this you realize that whatever free time you had in your twenties is gone. And with that comes a sort of reckoning, which just has to happen. A part of the record is my reckoning with that change and figuring out what the dreams I had as a young person mean to my life now.”

Remnant said that crafting the album was laborious, and that many of the songs that made the record date back to as far as 2012, when Southeast Engine, (the band Remnant was a part of in his 20s,) began to disband. He recorded the entirety of Sourwood in his basement, but-by-bit, song-by-song.

“There was quite a learning curb in making the record, I was relatively new to home recording at the beginning of this process, and I assembled a home studio in my basement – it is hard to come up with the money that it takes to go into a studio and record, and, at the time, I didn’t have a band, so I was struggling with the time it took to record, too,” said Remnant, who has since assembled a band, made up of his brother and former Southeast Engine bandmate Jesse Remnant on bass, Ryan Stolte-Sawa on violin and keys, and Jon Helm on drums. Although painstakingly perfecting drum part recordings on a Tascam 38 tape recorder in his basement on school nights after having worked all day himself was quite a task, Remnant said that it fit into his new, adult existence in a more meaningful way than renting studio space.

The album artwork features a vaguely rural feeling suburban landscape: housetops and powerlines painted a blush in hues of pink and purple. Like everything else about Sourwood, crafting the album artwork was something Adam did, bit by bit, by himself. 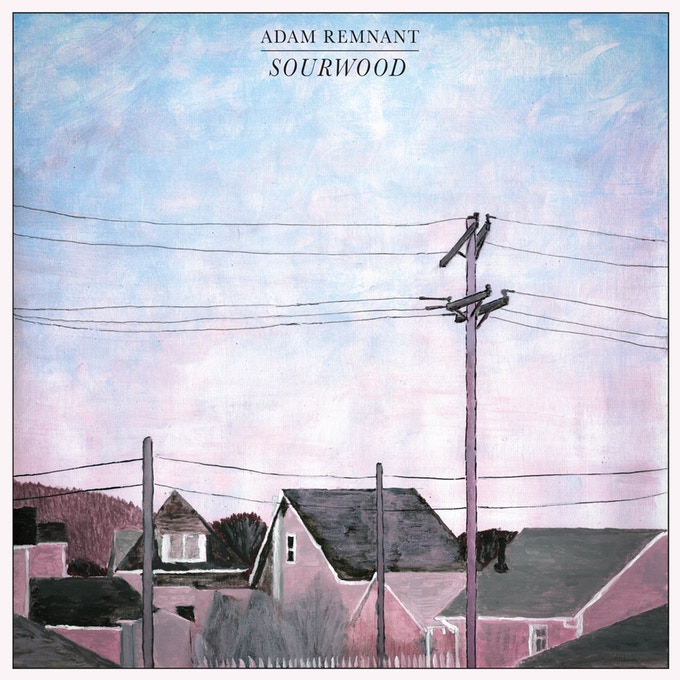 “My older daughter is really into making art everyday, so she was sort of my inspiration,” he said. “Sometimes I would sit down with her and try to make stuff. I have a brother (Joseph Remnant) who is a professional artist, so I always think that he’s the one who is a professional in that arena, and I’m just having fun. But that’s sort of my entire philosophy on making art, anyway.”

“The album artwork itself is a composite of a few images – I was thinking very abstractly about it when I started working on it, what I wanted the album artwork to be,” said Remnant. “When I write a song, I think about what time of day it is, what season it is, and I always try to evoke some sensory details that might be relevant in expressing that idea or emotion. And for this album, I settled on a pinkish sunrise or sunset – and I wanted the houses to look sort of Midwestern, and there are a couple of references to powerlines throughout the record, so I wanted to contain all of those images and colors.”

All-in-all, the aforementioned Kickstarter campaign that is bringing Sourwood to fruition raised a total of $5,684 from 133 backers, considerably more than it’s goal of $4,000.

“You know, I’ve always been someone that simultaneously wanted to be Kurt Cobain yet was so excited for the next practical step in my life,” he said. “When I first moved to Athens to go to college, getting booked to play at The Union was the biggest thing that could have happened to me, and I was very excited for that, it seemed like a dream come true, a huge goal to attain. I think (Sourwood) is kind of about how you harbor these desires for greater things while maintaining a practical outlook. In some ways, maybe I still want to be Kurt Cobain.”

‘When I Was A Boy’: Adam Remnant’s First Solo EP