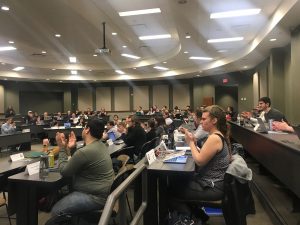 The Ohio University Student Senate passed a resolution Wednesday demanding the Ohio General Assembly to pass stricter regulations on accessing and purchasing firearms in the state of Ohio.

The action comes in the face of a recent stream of mass shootings in the U.S.

“I actually do feel in the climate we have today, there is a big risk for students on campuses, and I feel like lenient gun laws contribute to that,” July Holbert, a student at OHIO,  said.

One provision of the resolution calls for lawmakers to ban all semi-automatic assault weapons in the state.

“I understand people’s right to own a gun and defend themselves, but I don’t see a need for automatic assault rifles,” Student Senator Imani Edwards said. “Especially on a college campus.”

“I support a ban on semi-automatic weapons, which is what an AR-15 is,” Holbert said. “I support people’s right to own guns, but no one needs a weapon that can fire with every trigger pull.”

A similar push has been made within the Ohio Senate to ban assault weapons, including the AR-15, which has been the most widely used weapon in mass shootings.

The bill was controversial not only within the Senate but statewide.

“It has been proven you can go and purchase an AR-15 in less than seven minutes,” Holbert said referring to how Ohio gun shows take advantage of the “gun show loophole” to allow individuals to sell their personal collections of firearms without a license.

While the goal of the resolution is to make schools safer, not everyone is convinced limiting guns is the way to do it. Some Ohio University students don’t agree with Student Senate’s approach.

“They want to call for a ban on semi-automatic assault rifles, which most hand guns are semi-automatic,”said Missy Pedulla, president of the Ohio University College Republicans.  “So if you have a concealed-carry permit, you won’t be able to carry that anymore.”

Pedulla said she feels the student senate needs to be more informed before making such demands.

The divide on OHIO’s campus reflects a similar national divide on gun control.

“I don’t think this comes down to an issue of rights; it comes down to protection of individuals,” Senator At-Large Sam Miller, a secondary sponsor of the bill, said at the meeting.

OU Student Senate Decides Not To Vote On SB 5 Issue