< < Back to
The Ohio University School of Music is pleased to announce the Ampersand Festival 2018, a concert presented by the Wind Symphony on Monday, April 9 at 7:30 p.m. at Templeton-Blackburn Alumni Memorial Auditorium. This concert will feature four world premieres written by current students and alumni composers, including collaborative performances with local and regional rock bands and dancers. Admission to this concert is free and open to the public.
The Ampersand Festival, founded by Andrew Trachsel, associate professor of conducting and director of bands, explores new opportunities for creative collaboration across multiple musical genres and arts disciplines. The innovative and experimental programming of Ampersand breaks down traditional barriers to create new and authentic art to reach a wide audience. This is the third official year of the festival, and is a complementary event to the Athens International Film + Video Festival held April 9-15.
Two guest ensembles will be featured with the Wind Symphony. Wolfmen, founded in Athens and now active throughout the state, is comprised of four current and/or alumni musicians Seth Alexander, Bobby Lucas, Alex Shinn, and Daniel Spencer, who play progressive rock and have released two albums. Members of this group composed “In A Quiet Place” for this particular concert, which combines Wolfmen with the Wind Symphony.
The experimental rock trio Triangulus, also alumni, will perform a world premiere called “monsters like me” by D. Turner Matthews. Matthews graduated from Ohio University in 2015 with a bachelor’s degree in composition and percussion performance and in 2017 from Rutgers University with a master’s degree in composition, has composed the piece specifically for the combination of Wind Symphony and Triangulus. The instruments that Triangulus plays are invented by Matthews and performed by him and two other percussion alumni: Eli Chambers and Seth Alexander.
Alexander wrote “The Paths Between” for this concert, which features the Wind Symphony and dancers Caroline Ciferno and Lily Gelfand, seniors in the Division of Dance who collaborated with Alexander on the piece. The “Paths” in the title refer to the choreography that takes place between the dancers, who are set apart between rows of the Wind Symphony.
The final piece that will be premiered is Aaron Butler’s “10 Breaths for Wind Ensemble,” an experimental exploration of slow sound transformation with structured silences built between. The piece is performed by the full Wind Symphony and entirely without a conductor.
Patrons are encouraged to transition from this concert to that evening’s Athens International Film + Video Festival After-Party, hosted at Jackie O’s at 9 p.m. and featuring music by Daniel Bachman, primitive guitar and dobro.
This event is free and open to the public. For more information about this and other School of Music Events, please visit www.ohio.edu/finearts/music/ 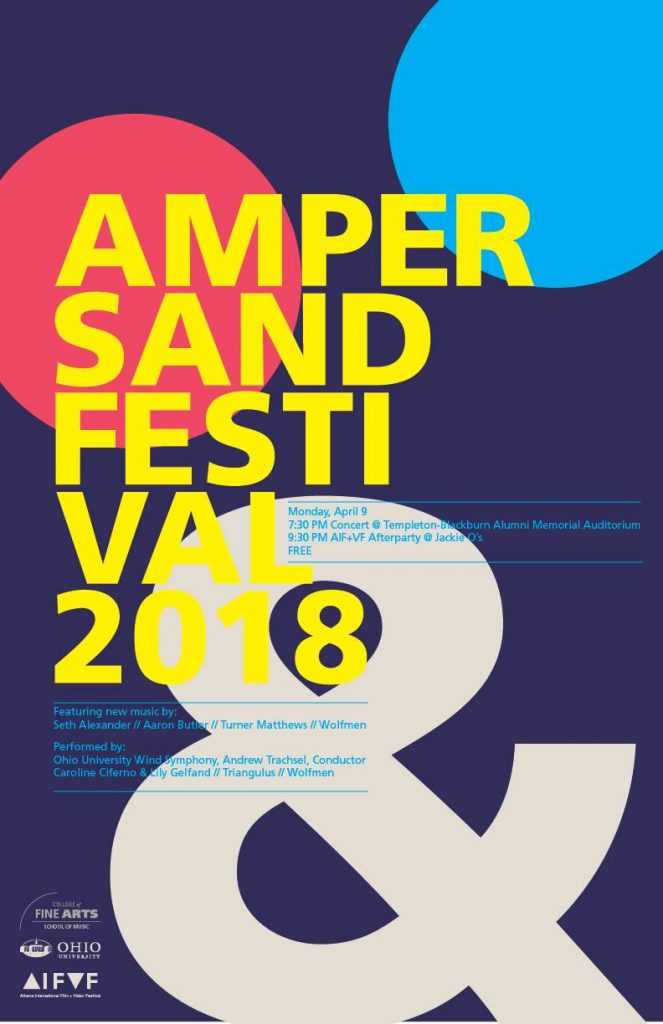