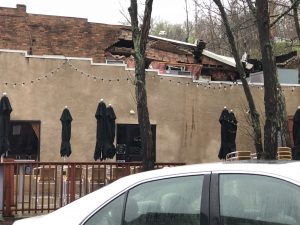 Authorities in Athens are investigating a possible explosion that occurred Sunday evening in the apartments above Cycle Path Bicycles at 104 1/2 West Union Street. The building partially collapsed.

Deputy Service Safety Director Ron Lucas says everyone in the building is out and accounted for. One male in his early 20s was rescued and transported to OhioHealth O’Bleness Hospital.

Residents from seven apartments in the building are displaced.

The owner of the building says this was a gas explosion, but the Athens Fire Department is still investigating. Columbia Gas of Ohio was on the scene.

Lucas says the state fire marshal will investigate, the length of the investigation is unknown.

West Union is closed from High Street to Depot Street. Thai Paradise and Cycle Path Bicycles will be closed until the investigation is complete.

Six Injured and Dozens Displaced Because of Union Street Fire