The 24th Annual Seabury Quinn Jr. Playwrights’ Festival will kick off on Friday, April 27. Every year the festival brings impressive productions of MFA playwriting student’s thesis plays to the Elizabeth Baker Theater and the Forum Theater on Ohio University’s campus. Check out information on the featured thesis productions, as well as mentor bios, below. 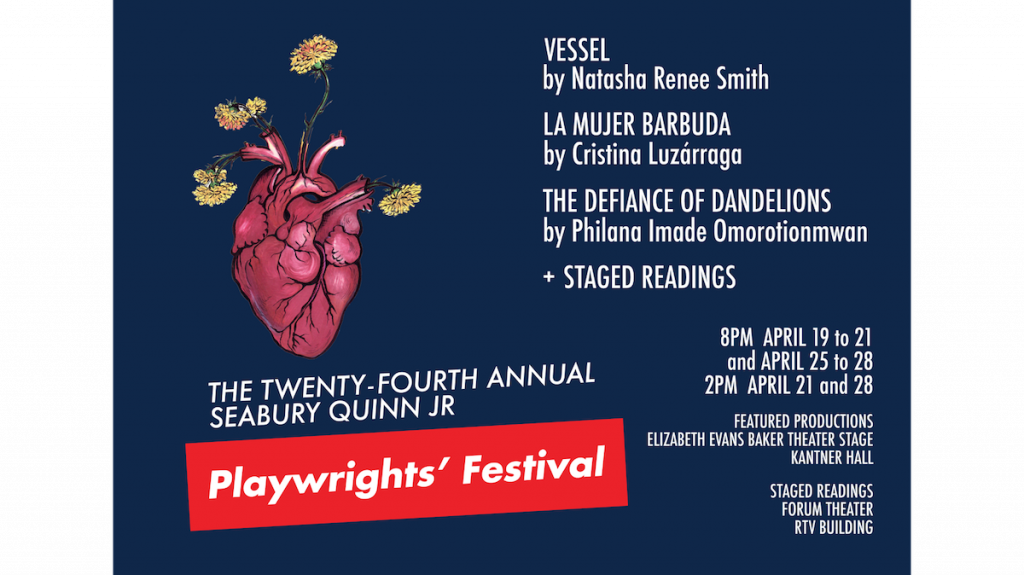 FEATURED THESIS PRODUCTIONS
Tickets for the Featured Productions are $5 general admission or FREE for OU Students (with valid student ID) through Arts for Ohio; available at the Templeton–Blackburn Alumni Memorial Auditorium box office.

The Defiance of Dandelions
by Philana Imade Omorotionmwan, directed by Jeanette L. Buck
8 p.m. – April 27, Elizabeth Baker Theater, Kantner Hall
Do not speak too loudly or too little or too much.  Do not get out of the place you’ve been assigned.  Do not give birth to a meadow of dandelions.
For as long as they can remember, The Strongness, The Queerness, The Boisterousness, The Brazenness, The Thickness, and The Softness have been trapped in the In-School Shading Room. While they wait for a release that seems like it may never come, a bouquet is born and they begin to remember the selves and the world that they forgot.

La Mujer Barbuda
by Cristina Luzárraga, directed by Jonathan Helter
8 p.m. – April 25 & 28, Elizabeth Baker Theater, Kantner Hall
Two women. Four breasts. One beard.
Maggie is an American airline pilot and new mother. When she tries to pump breast milk in the cockpit, she almost perishes in a plane crash––and that’s not even the worst of it.
Magdalena is a 17th century Italian weaver and new mother. When she suddenly grows a beard and nurses a baby at age 52, she sets off a domestic and civil crisis– and that, too, is not even the worst of it.
La Mujer Barbuda explores the intersecting lives of two women, separated by time and space and united in the struggle to thrive as a mother in a man’s world.

STAGED READINGS
Staged readings are free and open to the public.

How to Bake a Genoise Sponge Without Breaking Any Eggs
by Jean Egdorf
1 p.m., Thursday April 26, Forum Theater, RTV Building
Hello, bakers! Thank you for joining me for this very special episode of Melissa B’s Genoise. Today we’re making the trickiest cake there is: the genoise sponge. I better be able to perfect this recipe if I’m going to make it studying pastry at Le Cordon Bleu! My mom and my therapist think I’ll crumble under the stress, but I’m sure with help of my friends, Ms. J and Sylvie, neither me or my cake will fall apart.

Exodus of Dreams
by Inna Tsyrlin
4 p.m., Thursday April 26, Forum Theater, RTV Building
Can a kosher child live with a non-kosher heart? While Avram struggles to integrate himself and his family into American society, and meets constant obstacles in keeping his faith, his daughter befriends a pig. This pig may be the answer to the family’s heart transplant predicament, but if Avram accepts a pig’s heart for his sick daughter, will he still be a good Jew?

She Moves In Her Own Way
by Liv Matthews
1:30 p.m., Friday April 27, Forum Theater, RTV Building
Three seconds on the clock. Rolling Hills Middle School is down by two. All eyes are on point guard Alex Williams. She dribbles, pliés, and shoots the ball. It pirouettes in the rim and Alex’s mind leaps across time to her coach and former Atlanta Hawks player Anthony Prince. As the athletes wait for the ball to land, Alex’s journey through basketball and dance begins a duet with Anthony’s distant rise to NBA stardom.

Cora
by Katherine Varga, directed by Olivia Rocco
4 p.m., Friday April 27, Forum Theater, RTV Building
A young photojournalist travels overseas to document war crimes. But first, she must agree to leave her heart behind. Fortunately, her news corporation has state-of-the-art technology to ensure the hearts are protected and thoroughly entertained. Cora explores how a digital culture that connects us to the world can separate us from ourselves.

A Driving Beat
by Jordan Ramirez Puckett
1 p.m., Saturday April 28, Forum Theater, RTV Building
2,000 miles, a cross-country car ride
adopted son and mother travel side by side
white woman, brown son in the same space
Nine states to the hospital, the teen’s birthplace
Four days, if all goes according to plan
Five nights, of doing all that they can
to find his birth mom, identity, or home
but by the end of their journey
will any answers be known?

The Water Baby
by Trip Venturella, directed by Ernesto Ponce
4 p.m., Saturday April 28, Forum Theater, RTV Building
The year is 1930, and Theofanis Tombras has returned from his tour of duty in the Marines with an unnamed baby in tow. He finds a country bruised by economic crisis; Alexandra, his arranged fiancée, stranded across the ocean; and an unlikely opportunity offered by an old friend. As a better life beckons, it becomes clear to his young family that Theo will sacrifice nearly anything to sustain his growing ambition, and contain the specters of his past.

GUEST ARTISTS IN RESIDENCE
Each April, three nationally recognized, industry professional guest artists are invited to be in residence for the Seabury Quinn Jr Playwrights Festival to respond to the MFA plays and work with the MFA playwrights.

We are pleased to announce the guest artists joining us for the 2018 Seabury Quinn Jr Playwrights Festival:

Deborah Brevoort is a playwright and librettist from Alaska who now lives in the New York City area. She is an alumna of New Dramatists, an original company member with Alaska’s Perseverance Theatre and a co-founder of Theatre Without Borders. She is best known for her play The Women of Lockerbie, which won the Kennedy Center’s Fund for New American Plays Award and the silver medal in the Onassis International Playwriting Competition. The play is produced all over the US and internationally. It is published by DPS and by No Passport Press in a volume with The Comfort Team. The Comfort Team, about military wives during the surge of Iraq, was written with a commission from the Virginia Stage Company, where it premiered in 2012. My Lord What a Night, a one-act play about Marian Anderson and Albert Einstein, premiered in 2016 at Premiere Stages. She has since turned it into a full length play. The Blue-Sky Boys, a comedy about NASA’s Apollo program, was written with a commission from the EST/ Sloan Foundation. It was produced at the Barter Theatre and Capital Rep where it was the #1 critics pick for 2016. The Poetry of Pizza, a cross cultural comedy about love, was produced at Purple Rose Theatre,Virginia Stage, Mixed Blood Theatre, California Rep, Centenary Stage, and others. The Velvet Weapon, a back stage farce, won the national playwriting contest at Trustus Theatre. It is published with The Poetry of Pizza by No Passport Press. Blue Moon Over Memphis, her Noh Drama about Elvis Presley, is published by Applause Books in “The Best American Short Plays.” It is produced by Theatre Nohgaku who is touring it internationally. Into the Fire won the Weissberger Award. Signs of Life won the Jane Chambers Award, a Rockefeller Foundation grant, and the gold medal in the Pinter Review Prize for Drama. Both are published by Samuel French.

Deborah has also written the librettos, books and lyrics for numerous musicals and operas. She holds MFA’s in playwriting from Brown University and in musical theatre writing from NYU’s Tisch School of the Arts. Her website is: www.DeborahBrevoort.com.

Beth Blickers is currently an agent at APA, where she represents artists who work in theatre, opera, television and film. Before joining APA, she was an agent at Abrams Artists Agency, Helen Merrill Ltd. and the William Morris Agency, where she began work after graduating from New York University.

Beth has served on the jury panel for the Weissberger Award, the Ed Kleban Award, the Lark’s PONY Fellowship and Playwrights Week, participated in the Non-Traditional Casting Project, Inc.’s roundtable on inclusion and diversity in the theatre and has presented workshops and sessions on agenting, playwriting, directors and choreographers and related topics for organizations such as the Society of Directors and Choreographers Foundation, the Dramatists Guild, League of Professional Theatre Women, the Lark, New York University, the National Alliance for Musical Theatre, the Texas Educational Theatre Association and the Kennedy Center American College Theater Festival.

She is a member of the Association of Authors’ Representatives, Inc. where she served on the board for 15 years; the President of Literary Managers & Dramaturgs of the Americas; and is the Board Chair Emeritus of Theatre Breaking Through Barriers, a New York company that works with artists with disabilities.

Doug Wright was most recently represented on Broadway by the musical War Paint, which played at the Nederlander Theater.  His earlier plays include I Am My Own Wife (Tony Award, Pulitzer Prize), Posterity, and Quills (Obie Award), as well as books for the musicals Grey Gardens (Tony Nomination), The Little Mermaid and Hands on A Hardbody. (Drama Desk Nomination). Films include the screen adaptation of Quills (Paul Selvin Award, WGA) and production rewrites for director Rob Marshall, Steven Spielberg and others. Acting credits include two appearances on Law and Order: Criminal Intent, and the films Little Manhattan and Two Lovers. He is president of The Dramatists Guild and on the Board of The New York Theater Workshop. He has received grants from United States Artists and the American Academy of Arts and Letters, and is a graduate of Yale University (BA) and New York University (MFA). He has been a frequent guest at Yaddo and the MacDowell Art Colonies, and has taught or guest lectured at the Yale Drama School, Princeton University, Julliard and NYU.  He lives in New York with his husband, singer-songwriter David Clement and cats Glynis and Murray.