Infection And Inequality: How The Income Gap Fuels Ohio Valley’s Hep A Outbreak

The spokesperson for the Madison County, Kentucky, Health Department said there is a real threat of a Hepatitis A outbreak at the detention center right down the road in Richmond.

“It’s like a petri dish, they are packed so close together,” he said.

The majority of the Madison County inmates are in jail on drug charges, and health officials say the homeless and people with substance abuse disorders are most vulnerable to Hep A infection in this outbreak.

Other communities have vaccinated jail inmates and Kentucky health officials have supplied vaccine to prisons.

The Centers for Disease Control and Prevention supplies free vaccine for use in
high risk groups.

Thacker said that CDC deal comes with a hitch.

“The benchmark set by the state is if a county has five confirmed cases they can immediately apply to get a thousand doses of the Hep A vaccine,” he said.

With only one confirmed case so far, Madison County hasn’t met that threshold. Surrounding counties have reported more cases and while Thacker can see what is likely coming his way, he has only a few dozen doses of vaccine available and only for people in the high risk groups.

“We’d like to get those one thousand doses before we reach five cases, and are making inquiries into that, because we would like to get ahead of the game,” he said. For now, efforts are focused on letting people know the best methods for prevention, such as hand washing, and helping those with insurance get vaccine through private providers. 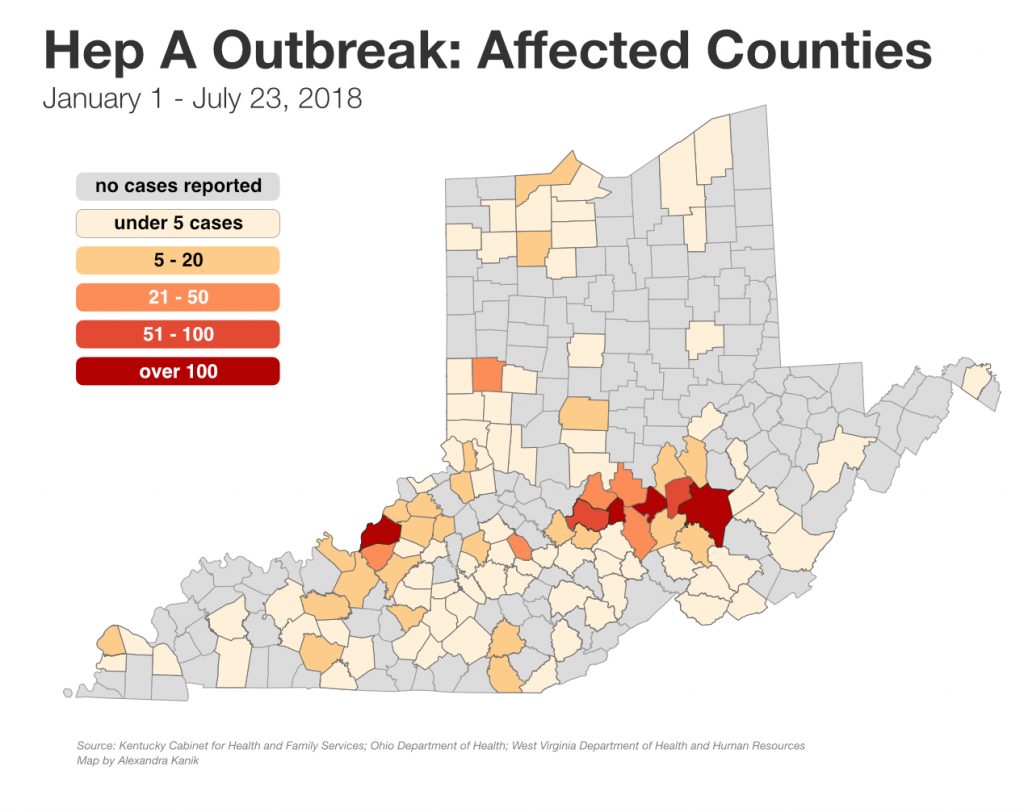 Kentucky health officials say they are reviewing requests for more vaccine on a case-by-case basis and that the majority of new infections continues to be in the high-risk groups.

Thacker’s predicament shows the difficulty many health officials in the Ohio Valley face as they race to contain the Hepatitis A outbreak. And experts say economic inequality could be fueling the spread of the infectious disease.

Hepatitis A is spreading rapidly in the region. In June alone, West Virginia confirmed 300 cases, bringing the total number of confirmed cases there to 699. Officials say the number of infections that go undiagnosed is likely far higher.

West Virginia’s total population is about 1.8 million. For comparison, California, with a population of more than 39 million, confirmed just 704 cases by the time the state declared its outbreak over in April.

And if the outbreak in the Ohio Valley follows the path of other connected outbreaks, officials say, it could last as long as two years.

Dr. Rahul Gupta is the chief health officer in West Virginia. He said the state is working closely with local health departments and other partners to reach those most at risk for infection. He said comprehensive harm reduction efforts, which include needle exchange programs, testing, and referrals, are essential to reaching those populations.

A West Virginia harm reduction program in Charleston closed amid local concerns about the needle exchange program. But Gupta said that program did not routinely offer Hep A vaccine. A nonprofit group has taken over providing those harm reduction service programs and the new program can also treat Hepatitis B and C, diseases associated with needle drug use.

While there are a growing number of harm reduction programs in the region, they continue to be a tough sell in many communities because of a public perception that they are encouraging or enabling drug use. 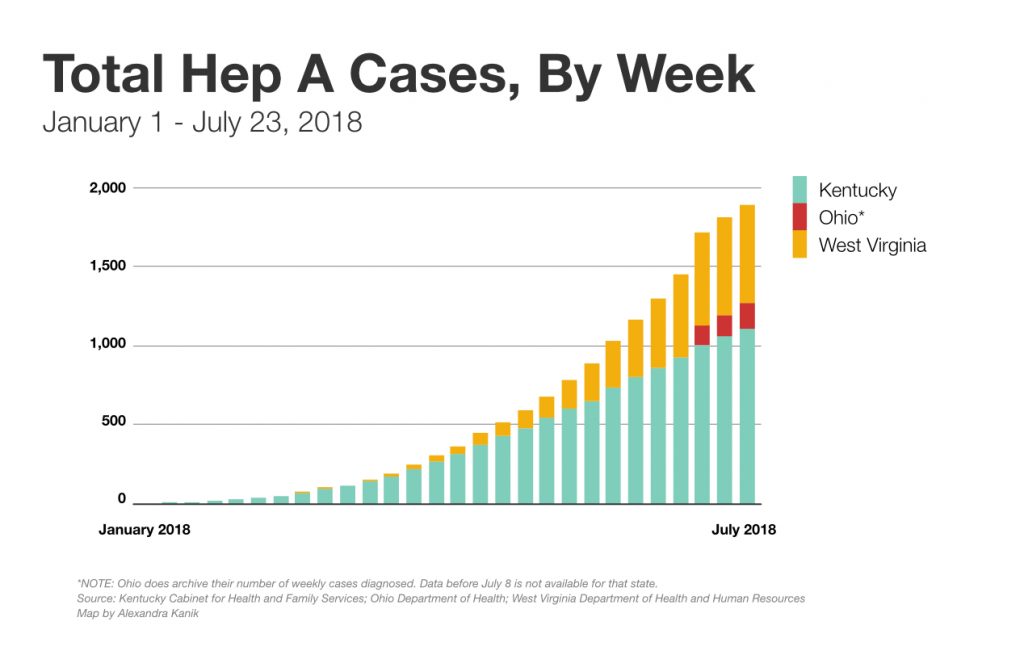 There are two ways health departments can receive vaccine according to Dr. Kraig Humbaugh who runs the Lexington-Fayette County Health Department in Kentucky.

Health departments can receive money from the CDC to buy vaccine for the at risk groups or they can buy it directly from manufacturers and potentially offer vaccine to a wider range of people.

There are six confirmed cases so far in Fayette County. But Humbaugh didn’t apply for free vaccine. He had enough money in a rainy day fund to buy vaccine. Some of that has already been used on inmates in the local detention center, in homeless shelters, and at other touch points with high risk groups. Some may eventually be sold at a minimal cost to people with insurance.

“Those are health departments who are really cash strapped,” he said.

Dr. Jeffrey Howard is Kentucky’s public health commissioner. Howard grew up poor in Harlan, in eastern Kentucky’s coal country, and he knows personally the challenges of poverty. He said this infectious disease outbreak highlights the chronic problems in much of rural Appalachia.

“We are trying to focus our efforts on the social determinants of health, which aren’t just social issues,” he said, and listed some of the many questions health providers must address. “Can you get to care, do you have a car, do you have a cell phone, can you fill your prescriptions, can you do all the things you need to do to be healthy?”

The lack of access to good housing, clean water and other basic needs contributes to health woes, he said.

These social determinants are part of the reason people in Appalachia are dying at a younger age than are people in the rest of the country. Often those health disparities are associated with high rates of disease such as heart disease, cancer, diabetes and obesity. The Hep A outbreak is a reminder of how infectious disease also relates to social factors.

Many of the region’s poorest counties are also hard-hit by the opioid crisis and the needle-borne diseases associated with opioid drug use. Much of the region has already been identified as having the highest risk of an HIV outbreak in the country. Now, many of those same counties are showing cases of Hep A.

Wanda Wyporska is executive director of the London-based nonprofit Equality Trustwhich campaigns to reduce inequality around the world.

She said the United States has some of the highest levels of inequality among developed nations, and that a large body of research shows that inequality has a broad range of consequences.

“What we are seeing is an increased amount of money going to the top 1 percent,” she said. “In countries where inequality is high we have higher levels of socially determined ills.”

Research links high levels of income inequality with higher rates of addiction, incarceration, and mental and physical illnesses. Wyporska said that, combined with reduced access to health care, can set the stage for an infectious disease outbreak like Hep A.

The disease, in turn, makes it harder for those living on the margin to stay solvent. She said that for someone working at an hourly, low-wage job, spending time in the hospital can set up a cascade of misery.

“It is a spiral and it takes one very small step, sometimes a minor step, to start people to fall into that spiral,” she said.

The ReSource’s Alexandra Kanik and Jeff Young contributed to this story.

Officials: Kentucky’s Hepatitis A Outbreak Now Worst In US