Click here for additional educational resources that align with the programming for Wednesday, May 27th. #LearnAtHome

The Ohio Valley Chapter of the National Academy of Television Arts and Sciences awarded Regional Emmy Awards to WOUB’s Evan Shaw, Rusty Smith and Adam Rich along with Liz and Lynn Shaw for their work on the 2017 documentary “Our Town: Jackson.”

“Our Town: Jackson” features an in-depth profile of the history and people of the Appalachian town of Jackson, Ohio.  It premiered in Jackson in the spring of 2017. 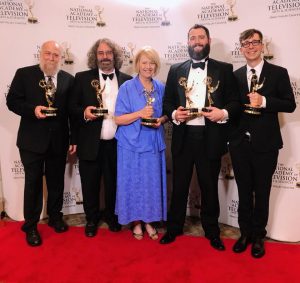 The Shaws made this a family affair with father, mother, and son all being winners.

“Winning with my parents is definitely a highlight of my career,” says Evan. “They’re both extremely accomplished musicians, and working with them on these (Our Town) projects has been an incredible experience.”

“I’m really happy for Rusty and Adam, who have been integral to the “Our Town” project, to be recognized for their work,” Evan comments.

“Our Town: Jackson” is one in a series of WOUB Public Media documentaries focusing on the culture and communities of Appalachia.

It is produced in partnership with the Barbara Geralds Institute for Storytelling and Social Impact at Ohio University.