God Knows Where I Am
Premieres Monday, October 15 at 10 p.m. on WOUB
Streams beginning October 16 on pbs.org and PBS apps

On May 3, 2008, the body of a homeless woman was found in an abandoned New Hampshire home. A journal found beside the body documents a journey of starvation and the loss of sanity with poignancy, humor and spirituality. God Knows Where I Am tells the story of Linda Bishop, a well-educated New Hampshire mother diagnosed with severe bipolar disorder with psychosis, who was intermittently incarcerated and homeless. 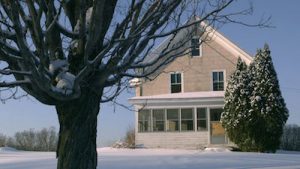 Through interviews with family, friends and medical and legal professionals involved with Bishop’s case, as well as readings from Bishop’s journal entries by Golden Globe-winning actress Lori Singer (Footloose, Short Cuts), the documentary traces the events leading up to Bishop’s hospitalization and investigates the final months of her life following her discharge. These intimate accounts of Bishop’s experience raise questions about society’s treatment of people with mental health conditions and those who are displaced, exposing systemic failures to protect those who cannot protect themselves.

Following the documentary’s premiere, PBS NewsHour Weekend anchor and Amanpour and Company contributor Hari Sreenivasan hosts a new panel discussion with filmmakers Todd and Jedd Wider and psychiatrist and former president of the American Psychiatric Association Carol Bernstein about mental illness, homelessness and other issues raised in the film. 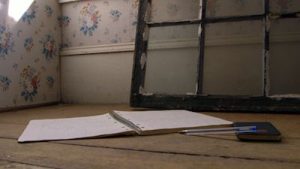 Noteworthy Facts:
• Linda Bishop’s body was found on May 3, 2008, in a home owned by Brian Smith and Lora Goss at 393 Mountain Road in Concord, NH, with a notebook found by her body. In an entry addressed to “whomever finds my body,” Bishop described her death as the result of “domestic violence and abuse” and asked for her death to be reported to the state police. She also requested to be buried at the New Durham Town Cemetery. The entry also included the note, “Jesus take me home.”
• Initially, Linda Bishop’s death was believed to be a suicide. However, her journal revealed that she lived in a minimally heated house through one of the coldest winters on record beginning in October and survived on apples and water from the nearby stream until December. Her death was later determined to be from starvation with dehydration, and associated with psychiatric illness.
• Family members began to notice a drastic change in Bishop’s behavior beginning in 1999, after leaving her job at a restaurant in Rochester, NY, because she believed she was being followed by the Chinese mafia.
• Linda Bishop’s daughter Caitlin was under her mother’s care until her teenage years, following an incident where Linda disappeared and left Caitlin home alone. Afterwards, Caitlin lived with family members while Linda moved from place to place; she last saw her mother in 2005.
• After Linda Bishop was found in northern New Hampshire by authorities following a disappearance, her sister Joan convinced her to seek psychiatric help. Bishop was diagnosed with schizophrenia and prescribed lithium and Zyprexa. Following her initial diagnosis, Bishop went on and off her medications, disappeared and was homeless for months at a time. Joan credits this behavior to the lack of aftercare for Linda.
• Following numerous offenses, including a felony for assaulting a corrections officer, Linda Bishop was deemed too incompetent to stand trial and was sentenced to a three-year stay at the New Hampshire State Hospital in 2006.
• While receiving mental health services, Linda Bishop refused medication. The hospital asked her sister Joan to apply to be her guardian, but in court, Bishop proved herself to be completely competent and did not meet the legal criteria for guardianship. Following this ruling, Bishop continued to refuse care in the hospital and was discharged on October 3, 2007. She eventually made her way to the Mountain Road home where she died. Family members were not informed of her release from the hospital, according to Joan. 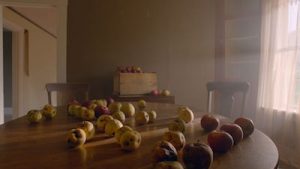 Noteworthy Quotes from the Film:
• “I’m so glad I found the 23 Psalm. He leads me in the paths of righteousness for his name’s sake. God knows where I am.” –excerpt from Linda Bishop’s journal
• “It’s not something I would ever wish on someone, because it is that life-changing. It does hurt that much. I blame her illness. I don’t blame her, I don’t. With my mother there are two very clear, different people. There is my mother, and there is Linda Bishop. My mother is the person I grew up with, the person who I came first. Linda Bishop is her illness. Linda Bishop’s who I hate.” –Caitlin Murtagh, Linda Bishop’s daughter
• “We’re supposed to be the greatest country in the world, and yet we allow this kind of thing to happen to someone who is defenseless in a lot of ways, and really cannot advocate for themselves, and cannot stand up, and say, ‘I need help.’ The system let her down. It caused this terrible death to this person who did not deserve it.” –Joan Bishop, Linda Bishop’s sister

RETRO REPORT ON PBS Premieres Monday and Tuesday, October 7 and 8