A Cautionary Tale About the Quest for Human Perfection

The Eugenics Crusade tells the story of the unlikely –– and largely unknown –– project to breed a better American race, tracing the rise of a movement that turned a scientific theory of heredity into a powerful instrument of social control. Populated by figures both celebrated and obscure, it is an often revelatory portrait of an America at once strange and eerily familiar. Written and directed by Michelle Ferrari, produced by Ferrari, Rafael de la Uz and Connie Honeycutt, and executive produced by Mark Samels, The Eugenics Crusade premieres on AMERICAN EXPERIENCE Tuesday, October 16, 9:00-11:00 p.m. on PBS. 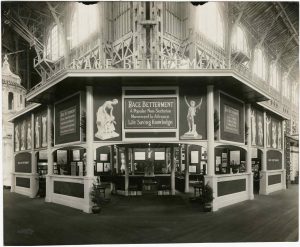 The word “eugenics” tends to conjure gruesome images of Nazi concentration camps and the millions of casualties from Hitler’s ruthless campaign for racial purity. What may come as a surprise to many is that a similar effort to breed a “better” human race flourished in the United States in the decades prior to World War II –– and that the manifestos written by the American movement’s proponents and the policy victories they achieved were a direct inspiration to the Führer.

Perhaps more surprising still, American eugenics was neither the work of fanatics, nor the product of fringe science. The goal of the movement was simple and, to its disciples, laudable: to eradicate social ills by limiting the number of those considered to be genetically “unfit” –– a group that would expand to include many immigrant groups, the poor, Jews, the mentally and physically disabled, and the “morally delinquent.” At its peak in the 1920s, the movement was in every way mainstream, packaged as a progressive quest for “healthy babies.” Its doctrines were not only popular and practiced, but codified by laws that severely restricted immigration and ultimately led to the institutionalization and sterilization of tens of thousands of American citizens.

A hybrid derived from the Greek words meaning “well” and “born,” the term eugenics was coined in 1883 by Sir Francis Galton, a British statistician and cousin of Charles Darwin’s, to name a new “science” through which human beings might take charge of their own evolution. Theorizing that all traits –– everything from height and hair color to intelligence –– were passed down from parents to their offspring, Galton proposed that matings be regulated so as to enhance the breeding stock of the human race.

By the turn of the century, eugenics had found an advocate in the United States: a Harvard-educated biologist named Charles Davenport who saw in the infant science of genetics a tool with which to realize Galton’s vision. Extrapolating from his own breeding experiments with plants and animals, Davenport put forth the notion that a wide range of other conditions were also hereditary –– not only physical traits but also criminality, pauperism, and sexual deviance. His beliefs were fueled by the widely shared concern that the America he knew was rapidly changing. “Davenport was very focused on wanting to maintain the traditional American stock,” explains Christine Rosen. “There was this fear that the right sort of American wasn’t having enough children. And the race as it existed was being diluted and polluted by incoming waves of immigrants.” 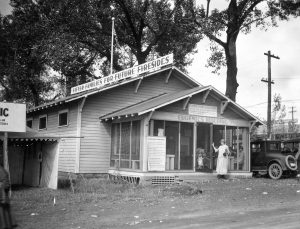 Eugenics became a deeply influential doctrine in the 1920s –– promulgated from pulpits and university lecture halls, popularized by human stock competitions known as “Fitter Families for Future Firesides,” and etched in legal codes that effectively barred entry to immigrants from most of the world and marked those at the margins of American society for planned extinction.

For many Americans of the time, the idea that humanity could be scientifically perfected held an almost irresistible allure. At a moment when “improvement” and “progress” were the rallying cries of the day and faith in science supreme, eugenics appeared to be an unusually efficient and effective strategy, one designed not merely to ameliorate social problems, but to eradicate them once and for all. Social reformers of all stripes –– including birth control proponent Margaret Sanger, health reformer John Kellogg, and W.E.B. DuBois –– embraced the possibility of “better breeding” and eugenics was used to justify all manner of agendas.

But as the 1920s came to a close, many scientists came to realize that some of their original suppositions about genetics and heredity were faulty. As the Great Depression proved that poverty and other social ills could befall even those from the best of families, the dogma of the eugenics movement rang ever more hollow. In 1936, when a young heiress named Ann Cooper Hewitt sued her mother and two doctors for surgically sterilizing her without her knowledge, the sensational celebrity trial that ensued made headlines across the country and further called into question the assumptions behind the decades-long program.

Although the craze was fleeting, the laws passed in the name of eugenics and the impulse that inspired them proved far more durable, lingering on in American life well after the movement’s scientific foundations were discredited by geneticists themselves, and even after the Nazis would link eugenics inextricably to genocide. Charting the movement’s rise and fall, as well as its legacy, The Eugenics Crusade explores the dangers inherent in the pursuit of human perfectibility.

“The impulse to perfect humanity is an ancient aspiration — the idea that somehow or the other you can get the best humans by selectively breeding the best, most fit, heartiest, most beautiful,” notes Dr. Siddhartha Mukherjee. “The trouble is that only some human beings can dictate or decide what those correct features might be. Who decides?”

“This film tells a story that’s incredibly timely,” said Samels. “The eugenics crusade of the early 20th century foreshadows so many of the issues facing us now, rising as it did from fears about demographic changes brought on by immigration, coupled with scientific advances in our understanding of genetics and heredity that led some to question what types of people were worth saving or helping. We see these debates now with advances in genetic manipulation and ‘designer babies.’ It’s a cautionary tale about how an idea that seems to begin with so much reason and justification can turn into a movement that blinds people to its consequences. It’s almost Orwellian in that it shows how we can slowly begin to accept a mindset that, looking at it in the rearview mirror, is shocking and shameful.”

The Eugenics Crusade will be available on DVD from PBS Distribution and can be purchased at ShopPBS.org. Online viewing begins Wednesday, October 17 at PBS.org. 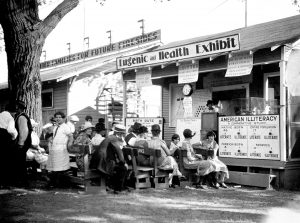 Adam Cohen, a former member of The New York Times editorial board and senior writer for Time Magazine, is the author of Imbeciles: The Supreme Court, American Eugenics and the Sterilization of Carrie Buck.

Nathaniel Comfort is a Professor at the Institute of the History of Medicine, The Johns Hopkins University, and author of The Science of Human Perfection: How Genes Became the Heart of American Medicine.

Daniel Kevles is the Stanley Woodward Professor Emeritus of History, History of Medicine & American Studies, Yale University, and author of In the Name of Eugenics: Genetics and the Uses of Human Heredity.

Wendy Kline is the Dema G. Seelye Chair in the History of Medicine in the Department of History at Purdue University. She is the author of Building a Better Race: Gender, Sexuality, and Eugenics from the Turn of the Century to the Baby Boom.

Thomas C. Leonard is a Research Scholar and Humanities Council & Lecturer, Department of Economics, Princeton University. He is the author of Illiberal Reformers: Race, Eugenics & American Economics in the Progressive Era.

Paul A. Lombardo is Regents’ Professor and Bobby Lee Cook Professor of Law, Center for Law Health and Society, Georgia State University. His books include Three Generations, No Imbeciles: Eugenics, the Supreme Court and Buck v. Bell and A Century of Eugenics in America: From the Indiana Experiment to the Human Genome Era.

Alexandra Minna Stern is Professor and Chair of the Department of American Culture at the University of Michigan and the director of the department’s Sterilization and Social Justice Lab. She is the author of Eugenic Nation: Faults and Frontiers of Better Breeding in Modern America, 2d. ed.

Siddhartha Mukherjee is the author of The Emperor of All Maladies: A Biography of Cancer (winner of the 2011 Pulitzer Prize in general nonfiction), The Gene: An Intimate History and The Laws of Medicine. He is an assistant professor of medicine at Columbia University and a cancer physician and researcher.

Alondra Nelson is president of the Social Science Research Council and professor of sociology at Columbia University. She is the author most recently of The Social Life of DNA: Race, Reparations, and Reconciliation after the Genome.

Christine Rosen is the author of Preaching Eugenics: Religious Leaders and the American Eugenics Movement.

Jonathan Spiro is Chief Academic Officer at Castleton University in Vermont and author of Defending the Master Race: Conservation, Eugenics and the Legacy of Madison Grant.