Arrests Made In Connection To 2016 Pike County Murders

“The evidence will show they conspired to kill these 8 people, 8 of their friends,” DeWine said.

In addition to aggravated murder charges for each of the four arrested, other charges include conspiracy, engaging in a pattern of corrupt activity, aggravated burglary, tampering with evidence, unlawful possession of a dangerous ordinance, obstruction of justice and forgery of child custody documents.

Child custody was mentioned as a big part of the case by DeWine, Reader, and Junk. Jake Wagner was the father of a child with Hanna Rhoden, according to officials.

“We won’t be able to say much about motive,” DeWine said. “But custody of that young child plays a role in this case.”

The great-grandmothers of the child, Rita Newcomb and Fredericka Wagner, were both arrested as well, on allegations of misleading authorities during the investigation.

The Wagners had been the prime suspects in the case for “some time,” according to DeWine.

DeWine and Reader said the suspects planned the alleged crimes for months by studying the victims’ habits, routines and the layout of their homes, including where they slept.

“They left traces, they left a trail, the parts to build a silencer, the forged documents, the cameras, the cell phones, all that they tampered with, and the lies, all the lies they told us,” Reader said.

The two-and-a-half year investigation was the most complex in the Bureau of Criminal Investigation’s history. DeWine said investigators received 1,100 tips from the public, conducted 550 interviews and issued more than 200 subpoenas and court orders, while testing more than 700 pieces of evidence.

Junk said the process of concluding the cases will likely take several years.

DeWine said there is no evidence that anyone else is involved.

Attorney General Mike DeWine has announced that four people have been arrested in connection to the 2016 slayings of eight people in Pike County.

The following four members of the Wagner family, of South Webster, were taken into custody Tuesday and charged with planning and carrying out the murders:

#BREAKING: Following an extensive investigation by my office’s #OhioBCI and the #PikeCounty Sheriff’s Office, we have arrested four people accused of the murders of eight people in Pike County on April 22, 2016. #Ohio pic.twitter.com/dyf5qk86jX

The arrests come two years after the state Bureau of Criminal Investigation and Pike County Sheriff’s Office began investigating the “execution-style” killings of seven members of the Rhoden family and a the fiance of one of the victims on April 22, 2016. 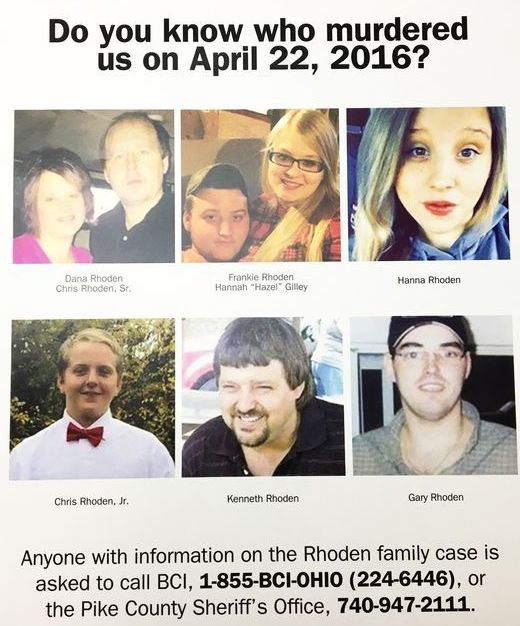 This story is developing. The Attorney General’s Office said it would have more details at a press conference to be held at 4 p.m. in Waverly, Ohio.

Investigators Name 4 in Tips Request on Ohio Slaying of 8