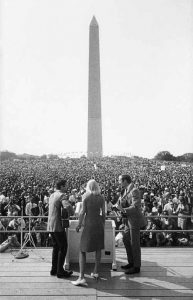 PETER, PAUL AND MARY AT NEWPORT 1963-65, by four-time Emmy Award-winning producer/director Jim Brown, is a documentary flash of insight and revelation during America’s 1960s iconic, hope-filled era. The film is part of special programming premiering on PBS stations in November/December 2018.

PETER, PAUL AND MARY AT NEWPORT 1963-65, their seventh special for PBS, captures the spirit of America’s Folk Renaissance at its zenith, when folk music dominated the Top 40 charts and songs written straight from the hearts of idealists, activists and poets provided the soundtrack for enormous, unprecedented changes in the American social-political landscape. 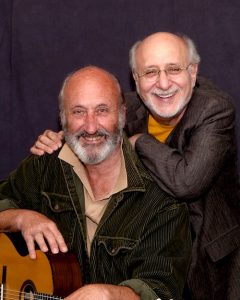 PETER, PAUL AND MARY AT NEWPORT 1963-65 presents songs filmed during the emergence of the group as the most honored folk trio in history, and includes — save for two snippets from a previous documentary — 17 never-before-seen, archival Newport performances including “The Times They Are A-Changin,’” “If I Had A Hammer,” “The Hour When the Ship Comes In,” “Blowin’ in the Wind,” and their only filmed renditions of such treasures as “Jesus Met the Woman at the Well,” “San Francisco Bay Blues,” “Rising of the Moon” and The Weavers’ iconic and powerful “Wasn’t that a Time.”