Carrie Mae Weems is one of the most respected and accomplished contemporary artists of our time. Her work, which spans over the course of three decades, incorporates a multitude of mediums to explore the consequences of power, family relationships, political systems, sexism, racism, and history.

On Friday, January 11, the Kennedy Museum of Art will open Carrie Mae Weems: The Usual Suspects, an exhibition organized by the LSU Museum of Art that features three of Weems’ most recent works that explicitly examine the way in which black bodies are associated with criminality. The three featured works are All the Boys (2016), People of a Darker Hue (2017), and The Usual Suspects (2018). The exhibition will be on display until March 31.

Weems will visit Ohio University’s Athens campus for a week, a residency that will kick off with a lecture she will give in the Baker Ballroom at 7 p.m. on January 22. On January 24 she will be at the opening reception of Carrie Mae Weems: The Usual Suspects at the Kennedy Museum of Art 6 p.m. to 7:30 p.m. On Friday, January 25, she will present the culminating performance from a week long Master Class in the Forum Theater that is located in the RTV Building on Ohio University’s Athens campus at 8 p.m. All of the events are free and open to the public. Tickets for the master class performance are free, but given on a first come, first served basis. They can be reserved at this link.

“I knew nothing about Carrie Mae Weems until I watched the video Grace Notes, and I was blown away at the interdisciplinary work in the video,” said Charles Smith, a Distinguished Professor of Theater and Playwriting in the Ohio University Division of Theater. Smith has been working with a variety of graduate students from several academic disciplines to develop the master class, which is being built around a prompt that he and Weems developed last month. 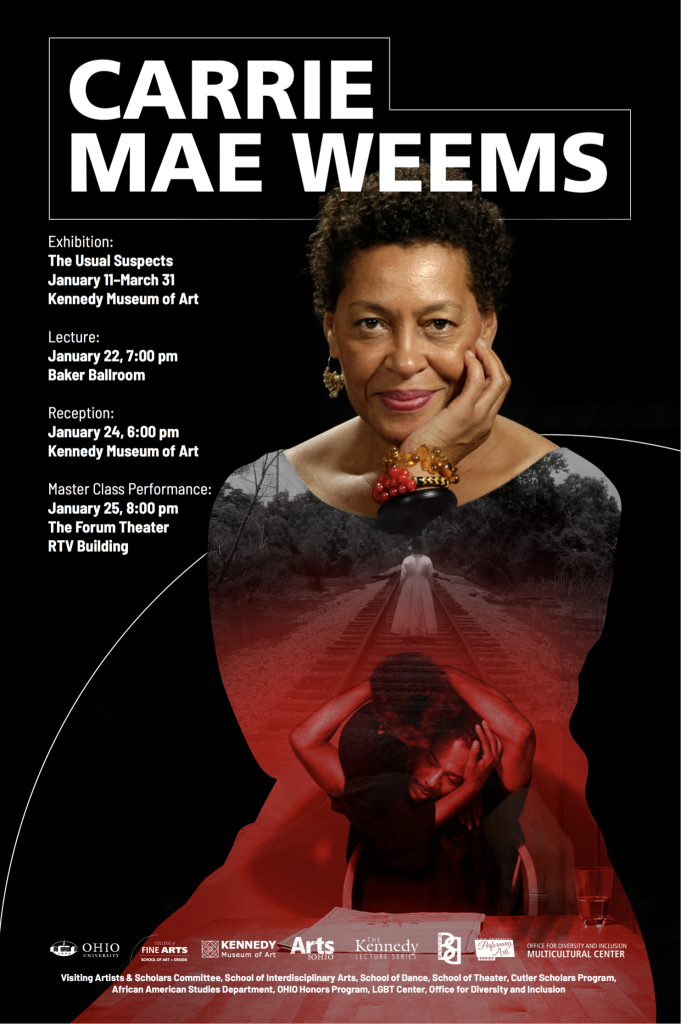 Smith said that the prompt asks students to respond to the impact of social and cultural violence in their lives while focusing on the racial tensions in the U.S. and examining the role of grace in the pursuit of democracy.

Putting together the master class will begin the week of January 14 and it won’t conclude until Carrie Mae Weems is on campus, in person, to further work with the students on the piece.

“We don’t necessarily have a black population living in the area that is extremely large, however, whenever classes are in session, that number grows, and I think that it is a good opportunity to bring her (Weems) here and have a conversation about everything that is happening in the world right now, in the past and in the not-so-distant past,” said Courtney Kessel, the Gallery Coordinator at the Ohio University School of Fine Arts and the Co-Chair of the Visiting Artists Committee. “This is just an important conversation to have, and to have it in different avenues, not just in a lecture in which you would passively sit and listen – but to get to experience her work in different ways.”

Lisa Quinn, the Educational Programs Director at the Kennedy Museum of Art, said that because Weems’ work speaks to such a wide swath of academic disciplines, her visitation served as a way to bring together a multitude of Ohio University’s departments.

“Her visit is not just for the students in the College of Fine Arts, this is really an interdisciplinary residency that really reaches across campus and opens up a dialogue in the national conversation right now, and brings it here for us to participate in it,” said Quinn.