From the South to Brooklyn to China, Meet the People Who Reproduce, Consume and Reclaim Racially-Charged Black Memorabilia 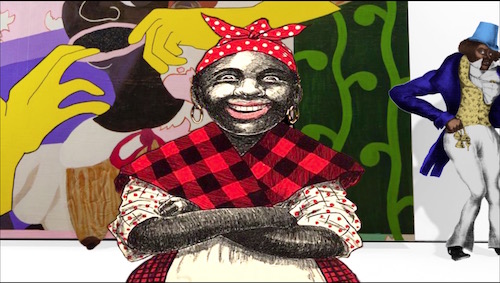 Black Memorabilia explores the world of racist material, both antique and newly produced, that propagate demeaning representations of African Americans and promotes white supremacy. From industrial China to the rural South to Brooklyn, the film shines a light on those who reproduce, consume and reclaim these racially-charged items, from “Jolly Nigger” banks to Mammy kitchenware, confederate flags, Nazi insignia and other ephemera. Produced and directed by Chico Colvard, Black Memorabilia premieres on Independent Lens Monday, February 4, 2019, 10:00-11:00 PM ET  on WOUB.

“I grew up with images of the coon, mammy, buck, sambo, pickaninny, and blackface characters, portrayed in subservient roles and mocking caricatures,” says filmmaker Colvard. “From Uncle Remus and Aunt Jemima at breakfast, to the Little Rascals, Shirley Temple and Bugs Bunny in blackface on Saturday morning TV, to Uncle Ben staring at me from the cupboard – these exaggerated and demeaning representations of African Americans were alien to the hard-working and dignified people I knew.”

At the intersection of international commerce, racial identity, and historical narrative, Black Memorabilia explores the meaning of these objects and questions their continued production. The film visits a Chinese factory that manufactures reproductions of racist black memorabilia and a flea market in Raleigh, North Carolina, where vendors and consumers gather to buy, sell and trade a variety of racist, confederate and KKK collectibles. From there the film travels to Bedford-Stuyvesant in Brooklyn, NY, where African American artist Alexandria uses racial minstrel show tropes to strip them of their power. 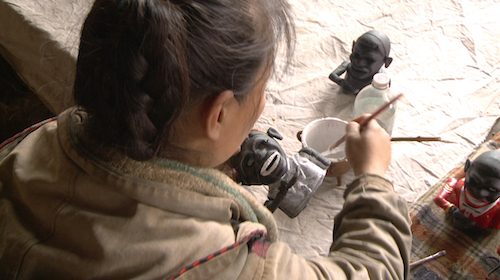 “Chico Colvard’s film traces the modern trade of objects that are the physical embodiment of cultural stigma and the literal objectification of people into racial stereotypes,” said Lois Vossen, Independent Lens executive producer. “At times uncomfortable and often unexpected, Black Memorabilia is a thought-provoking, stimulating addition to our nation’s ongoing conversations about how we think and talk about race. Chico pushes the boundaries of documentary form as he explores where these objects come from, what they mean to us, why they persist, who profits from them, and how their meaning can be reclaimed.”

Visit the Black Memorabilia page on Independent Lens featuring more information about the film, which will be available for online viewing on the site beginning February 5.

Chico Colvard (Director/Producer) teaches race, law and media-related courses in Boston. The Founding Curator of the UMB Film Series, he is also the founding member of C-LineFilms, which produces short and longform documentaries as well as online commercial content. His feature doc, Family Affair, premiered in competition at Sundance and was the first film acquired by Oprah Winfrey for her cable channel, OWN. The film streamed on Netflix, iTunes and other online outlets and screened at festivals and aired on TV stations around the world. Colvard is a two-time Sundance Fellow, WGBH Filmmaker-in-Residence, Firelight Media Fellow, and Flaherty Fellow and is a frequent guest speaker, moderator, festival panelist and juror.

“Always in Season” on INDEPENDENT LENS, Monday, February 24 at 10

“Tell Them We Are Rising: The Story of Black Colleges and Universities” on INDEPENDENT LENS, Thursday, February 27 at 9