As per tradition, Athens residents and OU students celebrate Green Beer Day on the Wednesday before spring break.

Bars such as The J Bar and The Crystal were scheduled to open at noon with specials like select $2 beer and green-tea shots for $3.50, aimed at attracting early celebrants.

Anna Onderisin, senior bartender at The J Bar, said because the business normally opens at noon on Green Beer Day the employees have to prepare much earlier.

“We order domestic kegs to dye green, we dye our rumple green and advertise our hours,” she said.

This year’s later start for Green Beer Days, still allowed drinkers to get a jump on their normal drinking. While police said the number of drinking-related offenses is similar to that on most Friday nights, Green-Beer-Day arrests have been almost non-existent in recent years.

According to the Athens Police Department, no one was arrested last year, in 2017 just one DUI was reported, and in 2015 just 3 arrests were made for under-age consumption.

APD Lieutenant Anthony Fish says there is really nothing special about this day.

“It is a normal Wednesday for us, I didn’t even know Green Beer Day was [tomorrow],” Fish said. “We normally don’t bring in more people that night.”

While the APD does not increase its staff, it does pay more attention to Court St.

Lindsay Stanton, a junior studying middle childhood education, has gone out for every Green Beer Day since coming to Ohio University. 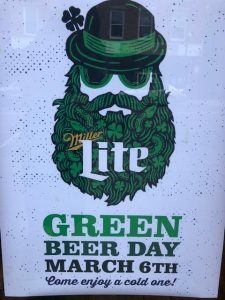 “People literally deck themselves out all in green and skip classes to go out to the bars,” she said.

She said she stayed out all night celebrating last year’s Green Beer Day at The Crystal and the C.I. She said she was surprised that people were out drinking in the middle of the week.

Stanton said she thinks fewer police are needed because of the earlier opening of the bars this day.

“I think there are more police out at night compared to the day since people are still going to class,” she said.