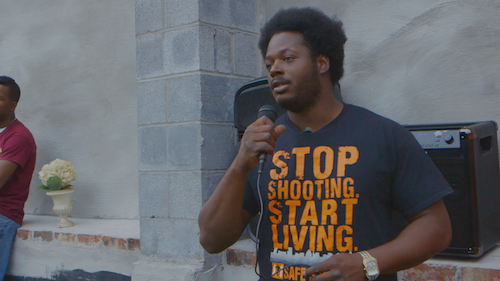 Filmed over a violent three-year period when Baltimore’s nickname never seemed less apt, Charm City profiles a group of police, citizens, community leaders and government officials who, with grit, fury and compassion, are grappling with the consequences of violence and trying to reclaim their city’s future. Directed by Marilyn Ness, Charm City premieres on Independent Lens Monday, April 22, 2019, 10:00-11:30 PM on WOUB and will also be available simultaneously for online streaming at pbs.org.

On the streets of Baltimore, shooting is rampant, the murder rate is approaching an all-time high and distrust of the police is at a fever pitch. With nerves frayed and neighborhoods in distress, dedicated community leaders, compassionate law enforcement officers and a progressive young city councilman try to stem the epidemic of violence. Filmed during the lead up to, and aftermath of, Freddie Gray’s death in police custody, Charm City is a powerful cinema vérité portrait of those surviving in, and fighting for, the vibrant city they call home.

“Charm City captures the realities of Baltimore by focusing on real-life cops, community organizers and politicians who are trying to save lives in the city that The Wire defined as urban decay,” said Lois Vossen, Independent Lens executive producer. “Marilyn spent three years capturing life in one of the city’s toughest neighborhoods to reveal three sides of the same story: the law enforcement officers who patrol the streets, the residents trying to survive those streets and make them safe for others, and politicians working with both groups. Although the issue of gun violence continues to dominate news cycles, Charm City offers brief flashes of hope that remind us that positive change is possible.”

Visit the Charm City page on Independent Lens, which features more information about the film.

About the Major Participants

Mr. C, Alex, and the Rose Street Community Center
In the heart of Baltimore’s Eastern District, made famous by The Wire for its blighted row houses which were home to the violent drug trade, sits the Rose Street Community Center. Clayton “Mr. C” Guyton, its founder and patriarch, has earned the respect of local gang members, drug dealers, and those just trying to survive in the neighborhood known as the “Middle East.” The beating heart of Rose Street, Mr. C shows us the power of empathy and humanity in battling years of community-wide trauma. Together, Mr. C and his Rose Street crew kept their four square-blocks free of homicides for 18 months. But when Mr. C is hospitalized, Rose Street sees a sudden uptick in violence, and the fragility of the peace Mr. C keeps is in jeopardy.

Alex Long
Alex Long is one of Mr. C’s many “sons,” not by birth but by choosing. A product of the Baltimore streets, his father was in prison by the time he was six, and he was shuttled into foster care by the time he was eight. Alex found a home at Rose Street, and helps Mr. C with his homegrown programs including neighborhood trash collection, gang mediation and his own brand of de-escalation training. And though Alex formalizes his role as a neighborhood peacekeeper by joining Safe Streets — the Baltimore equivalent of Chicago’s better-known Interrupters — this can’t protect him from the violence engulfing Baltimore. 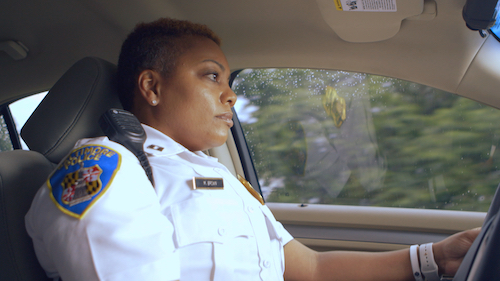 Captain Monique Brown
This 16-year police veteran knows what it’s like to grow up on the hard streets of Baltimore. A rising star in the department, this mother and grandmother attempts to restore the image of police officers in the Southern District, both to the citizens she serves and the officers she mentors. All the while, we witness the toll taken on those who have pledged to be police officers in Baltimore.

Officer Eric Winston
Baltimore born and bred — the ideal candidate according to most experts trying to heal a police/citizen relationship that has long been fractured — Officer Eric Winston began patrolling the Southern District in the days after the unrest that followed the death of Freddie Gray in police custody. Watching Winston, we begin to understand the long-term consequences of dealing with trauma day after day.

Officer John Gregorio
Officer John Gregorio has served in the Southern District with distinction, winning multiple commendations including the Officer of the Year Award for his six years of service. Wanting to be a police officer since he was a young boy, Officer Gregorio left his life in the suburbs to confront the entrenched hardships in Baltimore. Keenly aware that his uniform carries a heavy weight and that he is considered the face of government to most people he sees throughout the day, he bears the burden of the actions of all of his brothers and sisters in blue. With so many of his calls falling outside the scope of policing, and reliant on other agencies to provide the support so often needed, Officer Gregorio must live with the consequences of a system that routinely fails the people it is intended to serve.

Councilman Brandon Scott
The youngest City Council member ever elected in Baltimore, Brandon Scott pledged to serve his community through politics since he was a young boy growing up in a violent part of Baltimore. As we follow him through the three most violent years in recent Baltimore history, we see Scott use his position to hold the police — and the rest of the city’s agencies — accountable. His ethos is a constant drum beat: “Violence is a public health issue and it is not for the police alone to solve.” A bridge-builder and innovator, Scott is trying everything he can imagine to change the entrenched positions that drive the incarceration and violence rates plaguing Baltimore. 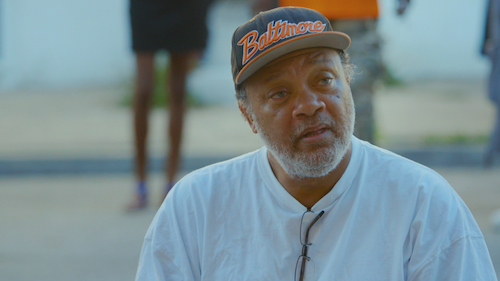 Marilyn Ness (Director/Producer) is a two-time EmmyⓇ, Peabody, and DuPont Award-winning filmmaker, and a member of the Academy of Motion Picture Arts and Sciences. She produced Cameraperson (dir. Kirsten Johnson), which premiered at Sundance in 2016, was released by the Criterion Collection, and was shortlisted for the 2017 Academy AwardsⓇ. Trapped (dir. Dawn Porter), which premiered at the 2016 Sundance Film Festival, received the Jury Prize for Social Impact Filmmaking, premiered on Independent Lens, and was awarded a Peabody. She also produced Katy Chevigny and Ross Kauffman’s feature documentary E-Team, which premiered at the Sundance Film Festival in 2014 and was bought by Netflix Originals, and later earned two EmmyⓇ nominations. Ness also produced Johanna Hamilton’s feature documentary 1971, which premiered at the 2014 Tribeca Film Festival, was broadcast on Independent Lens in 2015, and earned an EmmyⓇ nomination. She directed the documentary feature film Bad Blood: A Cautionary Tale that broadcast nationally on PBS in 2011.

Katy Chevigny (Producer) is an award-winning filmmaker and co-founder of Big Mouth Productions. Most recently, she produced Dark Money, which premiered at the 2018 Sundance Film Festival, and she directed one of the storylines in Kartemquin Films’ documentary series Hard Earned, which explores the lives of five American families struggling to get by in today’s economy, and won a 2016 Alfred I. DuPont Award. She co-directed (with Ross Kauffman) the EmmyⓇ-nominated documentary E-Team, which premiered at the 2014 Sundance Film Festival. Chevigny has produced and/or directed 12 critically acclaimed feature-length documentary films through Big Mouth, including Deadline, Election Day and also 1971 with Marilyn Ness. Her work has won multiple awards, been broadcast on networks including PBS, NBC, HBO, Netflix, and Arte/ZDF, and has played at festivals around the world.

CHARM CITY is a Big Mouth Production in association with Webber/Gilbert Fund and Motto Pictures.