Governor Mike Dewine signed the Heartbeat bill into law earlier this month adding more fuel to what was already a fiery debate on abortion rights in Ohio. 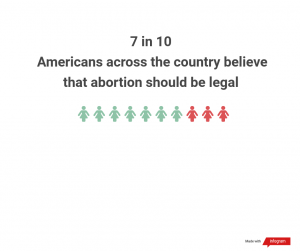 House Bill 258 is considered one of the most restrictive abortion laws in the nation.

Ohio is not not the only state to pass such a bill. Heartbeat bills have been making waves across the country.

The name “Heartbeat Bill” comes from the key stipulation in the bill that once a fetal heartbeat can be detected, a woman can no longer have an abortion. A fetal heartbeat can usually be heard six weeks into pregnancy, hence the bill’s nickname, “the six week ban.”

“It essentially bans abortion in the state of Ohio, it bans abortion before a woman knows she’s pregnant,” said Reverend Terry Williams, a  Pastor of Orchard Hill United Church of Christ who works with the National Abortion and Reproductive Rights Action League (NARAL).

NARAL has been an active opponent of House Bill 258 and has pledged to continue fighting it’s legality.

The other key player in this debate is Ohio Right to Life (ORTL)  that had lobbied in favor of the heartbeat bill.

“So, not only myself but ORTL we believe that life begins at conception. Abortion at any point would be ending a human life, “ said Jamieson Gordon, the director of communications and marketing for Ohio Right to Life.

Ohio Right to Life believes the Heartbeat Bill outlines a sensible timeline in determining a fetus’s  viability, or the ability of a fetus to survive outside of the uterus.

“When Roe v. Wade was handed down, viability was at 24 weeks and now we’ve seen babies live at 21 weeks. It depends on the medical care available to you,” Gordon said. “Our argument is that the heartbeat is an objective standard, there’s a heartbeat or there isn’t.”

Many others see the stringent timeline as an unfair hurdle that makes it impossible for women to get an abortion.

“A lot of women don’t know they’re pregnant at that point,”  said Rachel Stroup, the commissioner for Women’s Affairs at Ohio University. “What that bill is addressing is saying life begins with the heartbeat, that sort of definition has an agenda to it in order to enact a anti-choice legislation which is harmful to women.”

Madeleine Laflamme, a student at Ohio University, was inspired to take a stance against this bill after witnessing the hardships her friend suffered through after getting pregnant.

“She was in so much shock and didn’t know what to do so she didn’t go to class and she’s at home this week ” Laflamme said. “Obviously she’ll have to be out of class for a couple weeks and depending on the professor that could ruin everything for her.”

Her friend, whose hometown is Cincinnati, had to drive four hours to Cleveland just to book an abortion screening because all of the appointments for the clinic in Cincinnati were already booked up. Currently there are eight clinics that perform abortions in Ohio.

Laflamme believes there are already many existing hurdles preventing women from getting an abortion and this heartbeat bill is only going to make it harder.

“ It makes me sad for the women because it’s going to change so many women’s lives and make it so much more difficult,” Laflamme said.

ORTL’s Jamieson Gordon doesn’t see this bill as harming women but instead protecting them from making an irreversible decision.

“They go to abortion because they don’t feel like they have power,” Gordon said. “So if you show them the resources and support that could be given in their community, a lot of times they will choose to parent or make an adoption plan for those reasons.”

OTRL supports pregnancy centers that offer low-cost prenatal care, parenting classes and connect women in need with shelter and resources to raise a child. The organization believes if women were more educated about other options such as adoption, they would not choose abortion.

“A big part of what we want to do is make abortion illegal and unthinkable where women don’t consider that an option because they don’t feel they have to…our goal is to make abortion unthinkable because of the support women have and the resources they have,” said Gordon.

She was moved after hearing testimonies of women who’ve had abortions and regret the decision years later.

“Women share their stories and experiences and the pain they felt whether it be emotional or physical that can last for a while afterwards,” Gordon said. “Women that have experienced it say they don’t want anyone to go through that experience.”

Williams disagrees, he believes the most important thing is preserving a women’s right to choose and have autonomy over her own body.

“For me, knowing that a woman has the right of autonomy over her body and the choices she has to make for her own health care, that is just a nonsecular,” Williams said. “ I understand from my faith position, that every person has autonomy over their body.” 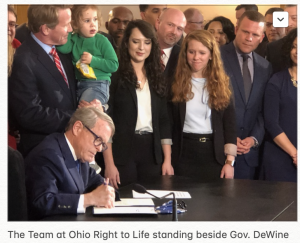 He wants to stop the use of religion to shame women for having abortions.

“This shaming of women out of a religious bent into thinking they’ve done something wrong and that grieves me because I feel powerless. I feel powerless to in any way affect what I already see as a frustrating lack of healthcare and abortion services,” said Williams.

He believes the only thing the heartbeat bill will do is increase  illegal abortions.

“We’ve heard about clothes hanger abortions in back alleys, the reality is this is already happening in southern Ohio today,” Williams said. “Women who are working middle class who can’t afford to travel or take time off of work for the required stay or surgery are already taking measures to hurt their bodies.

Williams is also concerned about the legal repercussions the bill outlines for doctors. Any doctors who performs an abortion after a heartbeat can be heard can be charged with a fifth-degree felony, punishable by up to one year in prison.

Williams believes this will deter doctors from wanting to work in Ohio.

“They wouldn’t have access to a great deal of resources that other states could provide and for me, that’s frightening in Appalachia because we already facing a shortage of OBGYNs,” Williams said.

Gordon doesn’t believe this bill will make any impact to doctors wanting to work in Ohio.

“Doctors are always being held to a certain code and they have to uphold certain standards and abide by certain laws based on what the medical bill puts them through,” Gordon said. “ I think in general they have to be careful across all practices, I think this would be no exception.”

Another aspect of the heartbeat bill that upset Williams is there is no exception made for cases of rape and incest.

“We are simply banning all of that decision making without deference to rape or incest and without significant protections for the life of the mother which I believe to be morally abhorrent,” Williams said.

Those in favor of the bill argue that there is no precedent to make exemptions for medical procedures due to these circumstances.

“We don’t include rape or incest exceptions in the bill and that’s because there’s nowhere else in the Ohio law in which we differentiate based on the state on someone’s conception,” Gordon said.

To the Supreme Court

As the debate continues on the local level, these heartbeat bills may very well make it to the Supreme Court, which is what abortion opponents are hoping for.

They believe with the two conservative appointments President Trump made of justices Neil M. Gorsuch and Brett M. Kavanaugh, the tide is in their favor and Roe V. Wade could be overturned.

As more of these heartbeat bills pop up around the U.S., one thing is certain, both sides will continue the fight as the legality of abortions hangs in the balance.

Heartbeat Bill Gets Another Hearing Today