Although the Huntington, WV-based band might have taken more from the eclectic American artistry of Neil Young and the heartfelt sonic articulations of Jeff Tweedy on their first album, 2016’s American Fiction, their debut on fellow Appalachian Tyler Childer’s Hickman Holler Records (distributed by Thirty Tigers) smacks with new wave, post punk, and psychedelic pop influence.

Full Moon, Heavy Light is ear candy, for sure, but in the sometimes emotionally hefty way that defines those aforementioned genres. There is still an Americana tinge – you can hear it on tracks like “Young Forever,” “Golden Highway Deserter” and especially in the expert way in which producer Drew Vandenberg (Deerhunter, Of Montreal,) works with Bradley Jenkins’ voice throughout the album. 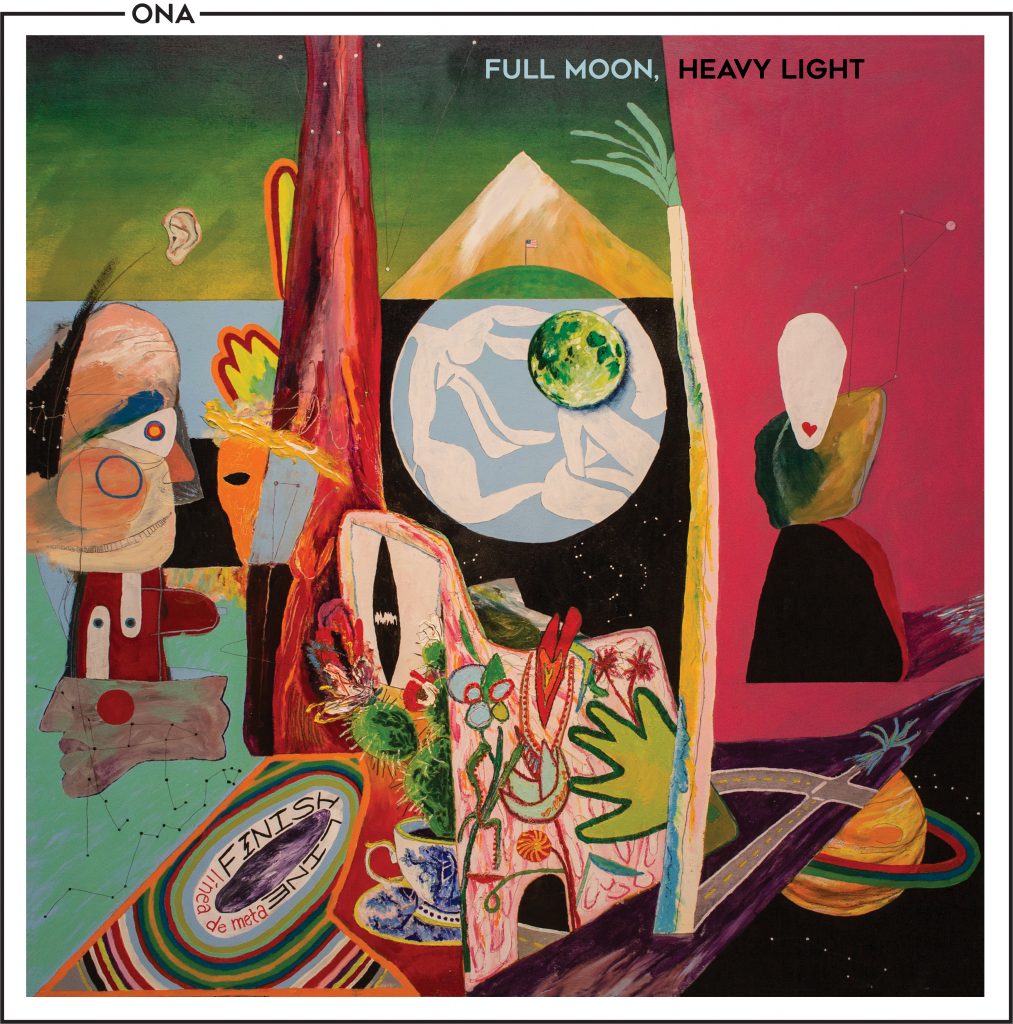 “Summer Candy” is the confection that leads Full Moon, Heavy Light: a bright testament to bubbly, sugary romantic infatuation, an emotional space that is tangible in the curiously affecting non-sequiturs (like the lyricism of Jeff Tweedy, or perhaps David Bryne,) sprinkled throughout the song as well as the expertly crafted sound that blankets them.

That leading track bleeds into “True Emotion,” which busts out with buoyant electric guitar and drummer Max Nolte keeping time to magical effect. The chorus breaks like a sonic wave, backed up by artful keyboard work by Brad Goodall, who joined Ona full-time on Full Moon, Heavy Light.

Goodall brings his multi-faceted understanding of sonic texture and genuine love for sound to the record. Part of this is due to his schooled usage of vintage keyboards throughout the record, such as the the fabled Yamaha DX7, the synthesizer that debatably defined the sound of the ‘80s on records such as Tears for Fears’ Songs From the Big Chair, Michael Jackson’s Bad, Dire Straits’ Brothers In Arms and so many more.

His presence is felt particularly potently on “Allison in the Grass,” a percolating electronic tune that weaves satisfying drum machine and seemingly obtuse lyricism into an oddly ear catching little melody that is strong on the keys.

“Young Forever,” is the second advance single Ona dropped from the album, serving as a downbeat foil to the exuberant “Summer Candy.” The song’s chromatic melancholy feels like finding forgotten photographs. The song hints at the casual cruelty embedded in all people, even people in love, and perhaps at time’s capability to put these slights into perspective. Sonically, the song is more complex fare than your standard indie love ballad, as it warps like burning film as it meanders to a close.

Similarly downbeat “Pennyroyal” gives way to the kaleidoscopic sound of “Golden Highway Deserter,” which pulsates while being underlined by barreling percussion and glittering, infectious guitar and keyboard. A synthesizer breakdown in the middle of the song leads into a hypnotic guitar solo pushing us to the climatic end of the track. Although sheathed in a sound pallet not unlike Golden Smog or Uncle Tupelo, the tune still manages to feel like it’s at least co-written by Edwyn Collins of Orange Juice, with its florid riffs and dependable beat.

The album ends with the gentle effervescence of “With You All Along,” which palpitates with an understanding of the way in which memory informs the past, present, and future. Injections of undulating synthesizer of a myriad of varieties pop through the song, which waltzes into a captivating denouement.

Full Moon, Heavy Light, while infectious, and occasionally sweetly nostalgia-laden pop on its façade, is also a tight record, in the best sense of the word. It feels like a 40-minute portal into the minds of five musicians whose careers are taking off after years of grinding away at building their fan base the old-fashioned way. There is some melancholy, there is much reflection, but largely, there is joy.

Ona will perform at Ace of Cups on Sunday, May 12. Listen to WOUB’s interview with the band, embedded above.

Tell Me Why: A Talk With Columbus’ Moon High

Angela Perley & The Howlin’ Moons To Light Up Casa Jan. 12